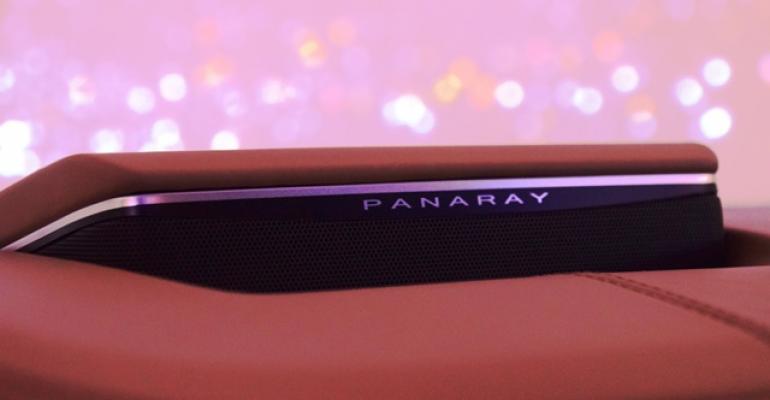 To ride in the Cadillac CT6 with a Panaray sound system is like bathing in music that may be familiar to the ear but never has been experienced in such clarity. Bose also is working the low end of the automotive market with a sound system for as little as $400.

Cadillac’s new flagship sedan, the CT6, is arriving now in showrooms, and the first 35 customers in the U.S. took delivery in March. No matter the trim level or price point, every CT6 comes with Bose premium audio, including the range-topping Panaray system that is an auditory marvel.

Panaray is the first offering from the Bose Advanced Technology Series, which leverages in the automotive environment much of the company’s expertise in home and professional audio systems.

What’s it like listening to 34 speakers powered by four amplifiers with a total output of 570 watts?

To ride in the CT6 is like bathing in music that may be familiar to the ear but never has been experienced with such clarity. The vocals seem to emanate from the windshield while the instruments swirl together from all points in the cabin, reaching your ear at precisely the right moment. This takes surround sound to a new level.

Seated inside a stationary CT6 for a Panaray demo, the experience gets more intense with a large video screen in front of the car to reinforce the system’s wide-ranging capabilities.

The beating of drums, fingers on strings, voices raised in harmony, a symphony that begins with crickets chirping, a single chord sustained on a grand piano and the gentle resonance of wind chimes – it’s all so visceral and pure, without a hint of distortion or speaker strain.

Panaray is not the most powerful factory-installed audio system on the market. Rated at 570 watts, it pales in comparison with 1,900-watt systems currently available.

But Bose sound never has been dependent on brute strength and big speakers. In fact, there’s only one big speaker – a 10-in. (255-mm) woofer in the center of the rear deck to bolster the low end.

​Panaray also incorporates six 4-in. (100-mm) speakers – two each in the instrument panel near the A-pillars and one in each of the four doors. Specially designed enclosures minimize vibration or buzzing.

From there the speakers become increasingly compact, including two 1-in. (25-mm) articulated tweeters in each A-pillar. Similar arrays appear in the rear doors. A cluster of three 2-in. (50-mm) speakers mounted in a motorized enclosure bearing the Panaray logo rises from the instrument panel at startup.

Unlike occupants in the back seats, the driver and front passenger get the benefit of a pair of 2-in. (50-mm) UltraNearField speakers placed in each front head restraint.

Speakers in the head restraints were cool and new in the Pontiac Fiero in the early 1980s, except at higher volume they sounded like someone screaming at you from up close.

All About the Bass

Filling out the low end are two thin 8.15L enclosures custom-made to fit under the carpet, extending from the seats and following the contour of the footwells up to the firewall.

Each enclosure contains a dedicated amplifier and two pairs of 2.75-in. (70-mm) woofers arrayed like pistons in a boxer engine. Firing in opposing fashion, the speakers cancel out mechanical vibration; the speakers are fixed in position, but the cones move in and out.

Cadillac was Bose’s first automotive customer for premium audio, using a 4-speaker system in the ’83 Seville, and the automaker has been tapping Bose expertise ever since.

Digital signal processing is what makes Bose sound systems so unique, and the Panaray system, so to speak, amped up the engineering requirements because equalizing 34 speakers never had been done in a car.

Every person seated in the CT6 will be closer to some speakers than others, which means there’s a time difference in milliseconds in what you hear from all the speakers at once. The trick is to tune the system so the music hits your ears at exactly the same time, whichever seat is occupied.

It’s a proprietary art that’s core to Bose and every audio company’s brand perception. At Bose, the chief architect for the CT6 sound system was Joe McCabe.

“Because we had so many different speakers to make sound, we had to increase our algorithm capability to be able to put the right signals to the right speakers,” McCabe says. “That’s how we create that 360-degree immersive experience for each occupant.”

The intelligence for Panaray comes from a large 20-channel amplifier mounted in the trunk that does all the signal processing. That’s in addition to the three remote amplifiers (one powering the rear subwoofer and one in each of the two bass enclosures under the footwells).

Bose also supplies the two other sound systems available in the CT6. One uses a single 8-channel amp and the other a single 10-channel amp.

Is Panaray competitively priced? That depends on customer listening preferences. It’s not cheap: $3,700 as a stand-alone option on Luxury and Premium Luxury versions of the CT6, priced respectively at $56,445 and $63,570.

The Panaray sound system was standard on a Cadillac CT6 Platinum AWD recently evaluated for Wards 10 Best Interiors, with a base price of $87,465.

How About Something Less Expensive?

But Bose doesn’t intend to ply its wares solely at the high end of the automotive market. At CES 2016 in January, the audio specialist demonstrated its Small Vehicle Series sound system in a Nissan Juke, although Nissan is not a customer for the system.

Using Bose Personal headrest speakers for the driver’s seat or both front seats, Bose employs digital signal processing for what it describes as an “immersive experience” with minimal componentry.

“Our hypothesis is you can probably support an audio system for about 2% of vehicle MSRP,” John Pelliccio, Bose product line manager-premium and small vehicle audio, tells WardsAuto. “If a car costs $20,000, we can put in a $400 audio system, but not one that costs $600 or $900.”

Even at the lower price point, the system has to carry the Bose sound signature.

“That means it’s got to play low notes as well as high notes, and everything needs to be spatially correct, so things from the left and right and back and front must work together,” Pelliccio says. “And the system needs to be able to play loud, concert-level volume without any appreciable distortion.”

Without a strong correlation between electrical power and acoustic performance, Pelliccio says the best audio systems also can be energy-efficient. “We have speakers that are very sensitive, so it doesn’t take a lot of electrical energy to create a lot of cone motion.”

He declines to cite the watt count for the system in the Juke “because it’s such a poor predictor of performance.” But Pelliccio says affordable Bose audio systems in the Mazda MX-5 Miata and Chevrolet Impala are in the 230- to 260-watt range.

The system in the Juke concept sounds very good for the money, thanks to newly designed 6.5-in. (165-mm) full-range speakers mounted in the doors to take the place of a dedicated subwoofer that is big, heavy and energy-intensive.

“You can make sound come from places where there aren’t any speakers. It’s like a surround-sound presentation from just stereo material.”

In total, the Juke concept car uses eight speakers, including one in each A-pillar. Even without speakers in the backseat, sound quality in the second row is terrific.

Vehicle-usage studies support the Bose philosophy to focus this system on front-row occupants. In the U.S., 85% of vehicles are occupied by the driver only, and 95% carry just a driver and front passenger.

Taking a brand down-market can be risky, and naysayers questioned the wisdom of Bose introducing the SoundLink Mini home speaker for digital audio for a mere $199.

“In two or three years of sales, that thing has now become the most popular Bose product ever sold,” Pelliccio says. “It’s tremendously popular because it’s the best sounding speaker of its size that you can find.”