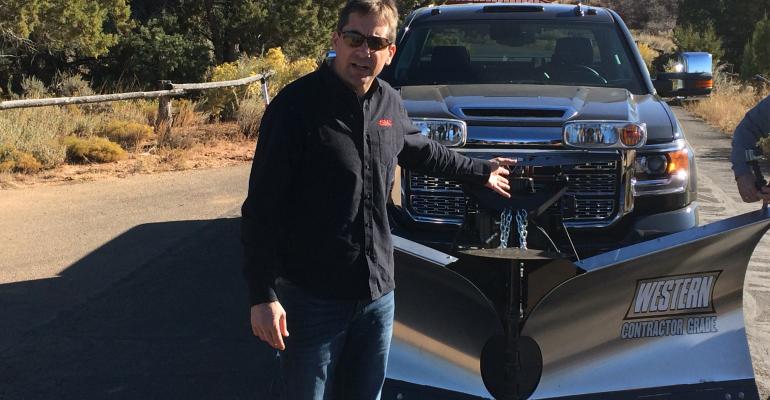 A 19% hike in torque to a peak 910 lb.-ft. brings a new level of plowing capability to the automaker&rsquo;s lineup of heavy-duty pickups and a chance to challenge longtime market leader Ford.

But the 19% hike in torque to a peak 910 lb.-ft. (1,234 Nm), as well as a bump to 445 hp from 397 hp, also brings a new level of plowing capability to the automaker’s lineup of heavy duty pickups and a chance to challenge longtime market leader Ford.

The pushrod engine’s redesign, which saw changes to more than 90% of its parts, compelled GM to make a number of other mechanical updates to accommodate the new output levels. The durability of the front and rear drivelines were improved, mainly through strengthened front U-joints and sturdier front and rear prop shafts.

Those changes meant trucks such as the GMC Sierra 2500HD demonstrated here could better accommodate 900 lbs. (408 kg) of snowplow equipment cantilevered off the front of the pickup.

“It’s a heavy unit,” Hackett says. “It puts extra strain on the front suspension and driveline.”

The duty cycle of a pickup plowing snow, which in most commercial and municipal fleets also means landscaping and infrastructure work during the summer months, requires additional protection to sensitive underbody pieces such as the transfer case. Those additions typically come from dealers when fleets order a snowplow package from the OEM.

Capacity of the diesel exhaust fluid tank was increased with the engine’s redesign to 7.7 gallons (29 L) from 5.5 gallons (21 L), which keeps trucks in the field longer. Other important upgrades to the engine (codename L5P) include a redesigned camshaft profile, more robust Inconel gaskets and new BorgWarner turbochargers with greater durability against higher heat.

The Allison A1000 6-speed automatic transmission has been improved, too, while redesigned induction and high-pressure fuel injectors with the force of 29,007 psi (2,000 bar) aid in the power increases.

GM also offers the industry’s only driver-selectable exhaust brake, which helps slow the truck during driving situations such as a downhill grade. Other systems are automated.

“It reduces the wear and tear on your brakes,” Hackett says.

During the demonstration here, Hackett powers a Sierra 2500HD outfitted with a 7.5-ft. (2.25-m) V-plow through a pile of sand with relative ease. GM tests its trucks during the summer months at its Yuma, AZ, proving ground because its properties are similar to snow at the automaker’s winter test site in Michigan’s Upper Peninsula.

Although Hackett’s Sierra needs a couple runs to bust through the sand pile, he attributes it to the lack of weight in the rear end that a typical plow pickup would carry with a salt spreader in the cargo bed.

The Push Behind Plows

The upgrades improve GM’s competitive position, although Ford remains the big dog in the snowplow segment with options across the F-Series GVW range and cab configuration. The Dearborn automaker benefits by selling more pickups annually than any other automaker, and brand loyalty in the commercial segment is as fierce as it is in the retail market. However, a big reason for the loyalty is once a commercial or municipal customer builds out a fleet it can take more than a decade to turn it over. That also means the parts bin of maintenance garages tend to be brand-specific, as does the mechanic’s knowledge of wrenching on them, so changing brands can be quite an undertaking.

Anecdotal evidence from industry experts suggests GM may be gaining on Ford, but FCA US and its Ram brand also offers a broad line of plowing packages across its portfolio of light- and medium-duty trucks. Nissan is in the game, too, with a snowplow-prep package for its recently released Titan XD.

Snow removal service providers also can outfit their trucks directly from companies such as Douglas Dynamics, a Milwaukee-based manufacturer and upfitter. That puts the onus on automakers to deliver trucks that offer ease of installation, an area where Hackett says GM also has improved.

The snow and ice management industry is a niche sector within the commercial and government sales channel, but remains an $18 billion business with 110,400 snowplow service providers in the U.S. employing upwards of 390,000 people.

“It is not insignificant,” says Martin Tirado, CEO of the Snow & Ice Management Assn., a professional trade group for the industry in Milwaukee.

The snowplow industry is forecast to grow at a rate of 3.2% to $19.8 billion in 2019, according to SIMA, driven by a robust economy and the group’s expectations for greater snowfall. Businesses, municipalities and government entities such as schools also are increasingly outsourcing their snow removal.

“The market also is growing because there is more development,” Tirado says. “The U.S. population is rising, with agricultural fields turning into housing, shopping centers, commercial office space – there are more paved surfaces out there.”

Uber-like on-demand service providers such as Plowz in the U.S. and Plow Me Out in Canada have smartphone apps and are driving the industry forward.

Those factors make it an increasingly attractive market for automakers.

“The commercial market is very important to us,” Hackett says.