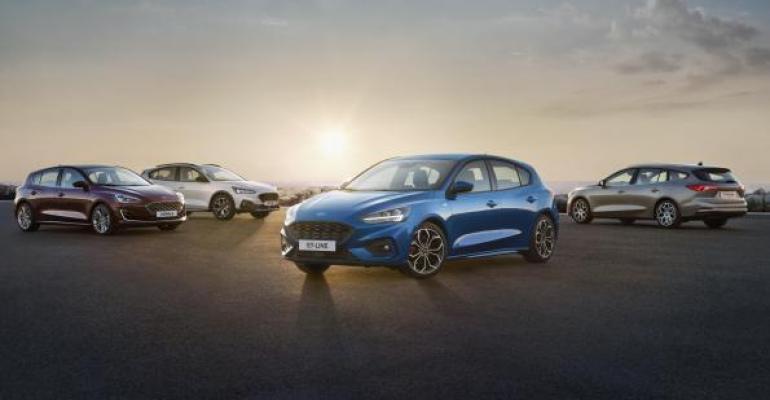 The Focus is the first vehicle globally to be based on Ford&rsquo;s new C2 platform designed to enhance crash performance, provide more interior space for Ford&rsquo;s midsize models and support improved aerodynamics for better fuel efficiency.

LONDON – Ford unveils the third generation of its popular Focus family hatchback and station wagon at a global launch in London while the sedan model makes its debut in China.

It’s being billed as “the best car Ford has ever built” and a “technological bridge” between the automaker’s products of today with its expected products of tomorrow.

Due to be launched in the European market later this year, Ford says the Focus boasts the most sophisticated range of driver-assistance technologies ever offered in one of its products, including:

Cabin comforts include the FordPass Connect embedded modem for connectivity and a new wireless charging pad for compatible smartphone devices.

The four models revealed to European journalists are a Focus Titanium station wagon offering 2 ins. (50 mm) of extra rear-passenger legroom compared with the hatchback models, a Focus ST, a Focus Vignale and a Focus Active raised 1.2 ins. (30 mm) with plastic-shrouded wheel arches to appeal to the urban CUV consumer.

Jim Farley, Ford executive vice president and president-global markets, says the vehicle is the “bridge between the Ford cars of today and what they will become tomorrow.”

He adds: “The all-new Focus is proof of an advanced strategy for the future and is also a fantastic product. It brings Level 2 autonomy and connectivity technology to everyone globally and not just the privileged.

“Focus also represents a step change in the way Ford develops vehicles globally,” Farley says. “To create our future lineup we are moving to five flexible architectures. We are also developing common body, chassis, electrical and drivetrain modules that are going to be used across all those architectures. Focus is key because it’s the first fruit of that approach.”

The Focus is the first vehicle globally to be based on Ford’s new C2 platform designed to enhance crash performance, provide more interior space for Ford’s midsize models and support improved aerodynamics for better fuel efficiency.

The car was made possible following a €600 million ($740 million) investment at Ford’s Saarlouis assembly facility in Germany.

“As we speak, Ford is investing $11 billion in electrified vehicles that is going to lead to 40 electric vehicles launched globally by 2022 – 16 of which will be dedicated battery-electric vehicles,” he says. “In Aachen in Germany we are hard at work finalizing our electrification testing here in Europe, and that’s our immediate priority here.”