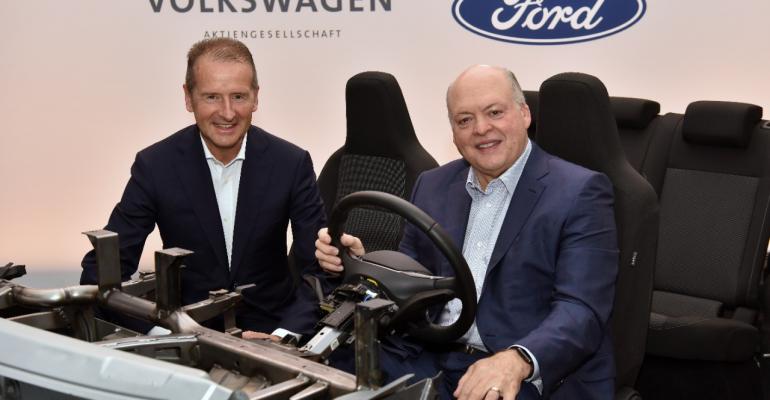 The collaboration not only multiplies the potential economies of scale for Volkswagen’s MEB electric-vehicle architecture, but profoundly expands the capabilities of Ford’s autonomous-vehicle partner, Argo AI.

Ford and Volkswagen extend their global partnership on commercial vans and midsize pickups to include electric and autonomous vehicles, an alliance expected to add 600,000 vehicles to an EV platform from the German automaker already estimated to account for 15 million units over the next 10 years.

The collaboration not only multiplies the potential economies of scale for Volkswagen’s MEB electric-vehicle architecture, but profoundly expands the capabilities of Ford’s autonomous-vehicle partner, Argo AI, with a $2.6 billion investment in the unit from VW for access to the Pittsburgh startup’s self-driving system.

The valuation of Argo AI shoots to $7 billion, which bolsters the competitive positions of Ford and VW with the likes of Waymo and General Motors. GM’s Cruise AV unit has been valued at $19 billion, while estimates of Waymo’s valuation are considered several times higher than Cruise.

The companies do not disclose the value of Ford’s buy-in to the MEB platform, saying only that it will be a “set-by-set” purchase of battery packs and structural parts for the assembly and sale of an EV by Ford in Europe.

The vehicles Ford will build off MEB will not be marketed in the U.S., at least initially, because the nature of the design is European-specific. Ford does not expand on that point but says Europe’s stricter emissions rules play a unique role.

Volkswagen will supply the MEB platform as well as unspecified electric driveline components likely to include VW-produced electric motors and a modular lithium-ion battery being developed for the German automaker’s upcoming range of ID.-badged electric cars headed by the ID.3.

Ford will design and assemble its new EV at its factory in Cologne, Germany.

Ford says the deepened collaboration to EVs will not affect the automaker’s planned $850 million investment on electrified products at its Flat Rock, MI, assembly plant, nor will it affect Ford’s suggestion of an F-150 EV for the U.S. in the future. Ford also has invested $500 million in Rivian, a U.S. startup focused on battery-electric pickups and SUVs.

Electric vehicles, autonomous vehicles and mobility services such as ride hailing are expected to radically transform the traditional automotive industry, and big players such as GM, Ford, VW, Daimler, BMW and Fiat Chrysler are scrambling to position themselves for the software-driven shift.

Future mobility also is expected to drive industry consolidation, evidenced most recently by the proposed tie-up between FCA and Renault that has sputtered out. But industry experts agree it must happen due to unprecedented costs associated with the new technologies. Honda, for example, pledged a $2.75 billion investment in GM Cruise last year to defray AV costs.

Refashioning itself after the devastatingly costly Dieselgate scandal, VW is spending $34 billion on electrification (€30 billion) alone in the coming years. Ford is investing $11.5 billion for 40 electrified products by 2022.

“This alliance has strategic value for both companies,” Ford President and CEO Jim Hackett tells journalists and investors during a joint announcement of the broadened partnership in New York.

“We’re sharing costs, we’re taking advantage of combined capabilities,” he adds. “We’re in a position to capitalize, in the future, on mobility with an AV platform and this electric-vehicle platform.”

VW intends to tap Argo AI’s self-driving system for a product in the early 2020 timeframe, while Ford will use MEB for one vehicle with expectations for a second. There are no equity ties between the two companies. 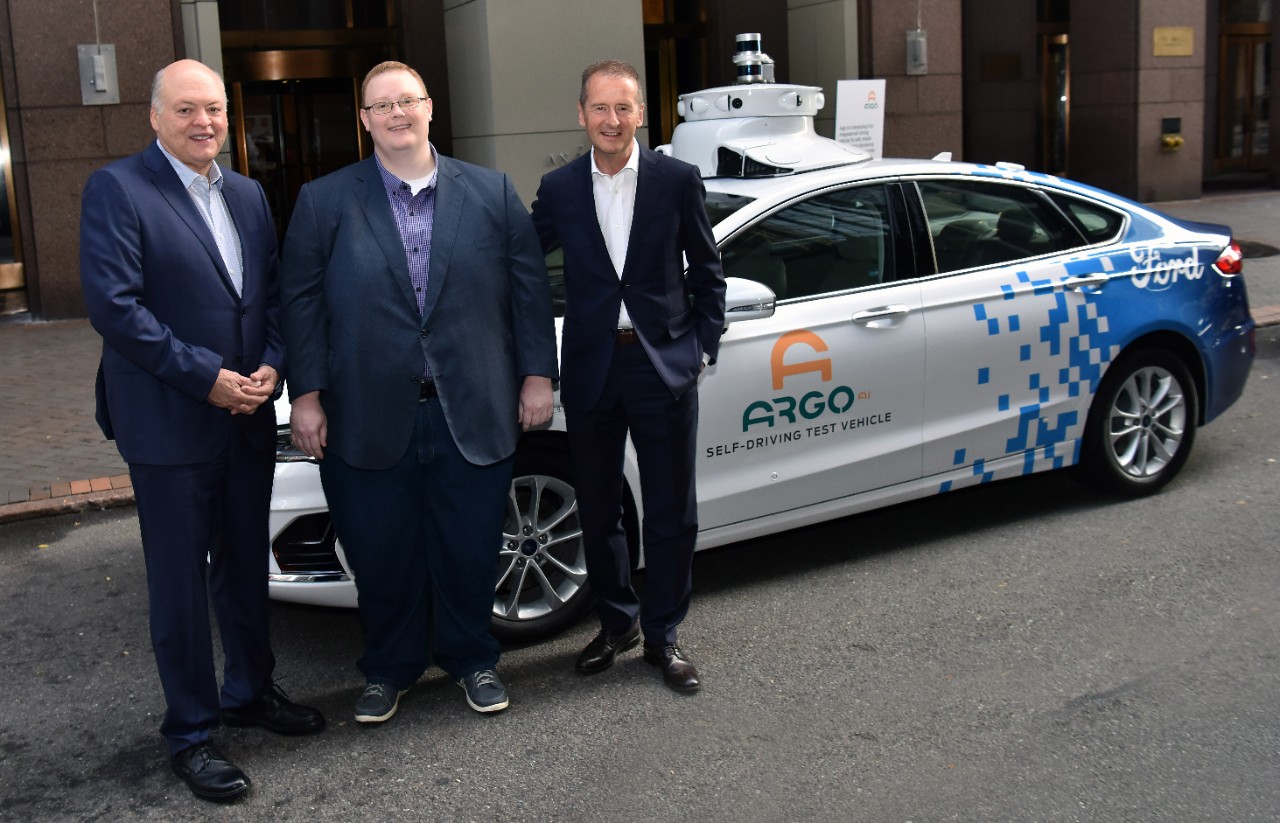 The MEB platform represents a $7 billion investment by VW with an original target of almost 70 models for the group by 2028 and 15 million units between 2020 and 2030.

It is expected to have a zero-emissions range of up to 342 miles (550 km) and the flexibility for applications ranging from small city cars to large cars and commercial vans. VW says 24,000 orders already have been placed for its first EV, the ID.3.

“The more cars that are manufactured using this platform, the cheaper they become,” says Herbert Diess, chairman of the board of management at VW Group. “It is of utmost importance to scale e-mobility as far as possible.”

Diess says if Ford adds a second EV to the platform, it would double the production targets for MEB. The 600,000 units expected off the first Ford EV from MEB would be over six years.

“This is an important milestone for Volkswagen and, potentially, for Ford,” Diess says.

Argo AI also wins big. The AV developer not only receives an important cash infusion from VW, but its technology also will enjoy the manufacturing might of two of the industry’s biggest players.

“The scale is massive,” Argo co-founder and CEO Bryan Salesky says. As part of the deal, VW also commits to purchasing shares in Argo AI from Ford over a three-year period.

Argo considers itself unique in the AV space because it is striving for naturalistic performance from its self-driving system. In other words, it wants to strike a balance between the contrasts of cautious and aggressive driving exhibited by humans.

The collaboration caps a year of negotiations between Ford and VW, although they continue to iron out details for the second Ford EV.

Addressing the delicacy of alliances, Diess says industry consolidation will happen, while Hackett admits the post-Dieselgate culture of VW was a major consideration during his initial talks of the alliance with Ford Chairman Bill Ford Jr.

“It was one of the first things we put on the table,” says Hackett, who himself is orchestrating an $11 billion restructuring of Ford. “I’m confident it has been addressed. In everybody’s life, in business, you learn from mistakes like that. You either get better or you get worse, and I would say VW has gotten better from that scandal.”

The collaboration between Ford and VW is not a first for the two companies. The pair launched a joint assembly operation in 1995 called AutoEuropa. The Portuguese venture was fully taken over by VW after its original product’s lifecycle concluded.

In announcing the expansion of their alliance, Ford and VW add detail to their existing commercial-vehicle JV.

Ford says it will engineer and build a medium-sized pickup to be sold by both Ford- and VW-owned brands in Africa, Asia Pacific, Europe, the Middle East and South America from 2022.

High-volume commercial vehicles, such as Ford’s Transit and Ranger, as well as VW’s Transporter and Caddy, will remain in the brands’ respective lineups, according to Diess.

– with reporting from correspondent Greg Kable in Stuttgart, Germany