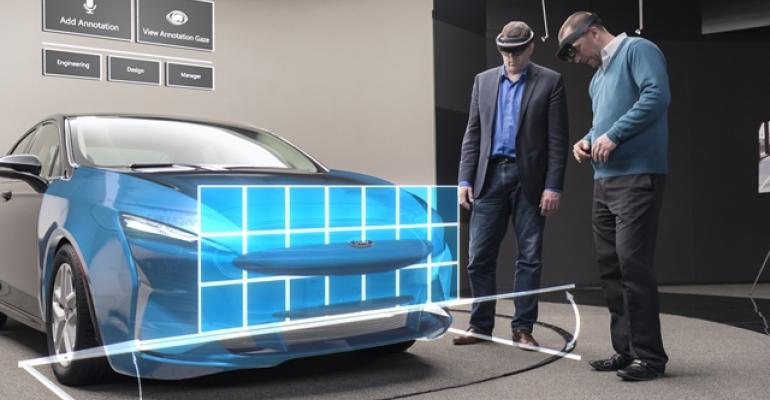 DEARBORN, MI – Somewhere between the visceral feel of a hard clay or foam model and the ether of virtual reality, Ford is experimenting with a new mixed-reality technology that combines physical vehicles and computer imaging to improve designs and speed development.

The year-long pilot program using Microsoft HoloLens wireless headsets enables designers to visualize various elements and features as though they are physically part of the vehicle in the studio.

“It’s amazing we can combine the old and the new – clay models and holograms – in a way that both saves time and allows designers to experiment and iterate quickly to dream up even more stylish, clever vehicles,” says Jim Holland, vice president-vehicle component and systems engineering. “With just a snap of your fingers you can change a design.”

During a demonstration at the automaker’s design studio here, design manager Michael Smith shows how HoloLens allows him to share different iterations of a grille design or a mirror housing with a roomful of spectators. Different options can be projected onto the car’s surface by navigating virtual menus with a click of the finger.

“With HoloLens, we can instantly flip through virtual representations to decide which direction they should go,” Smith says. “As a designer, you want to show, not just tell. This is much more compelling.”

One example illustrates how designers and planners from differing disciplines and in different geographic locations can evaluate the same simulation of various exterior rearview mirror sizes and reach a consensus based on their individual requirements. The simulation instantly can vary the mirror size as well as showing the viewing angle and area reflected in the mirror.

While the styling designer might want the mirror small and sleek, the engineer knows the government-mandated size and the safety expert might desire extra viewing area to aid the driver.

HoloLens also permits designers and planners to collaborate with others by recording audible notes on vehicle attributes and attaching them to a specific location on the vehicle for follow up.

Using virtual reality in automotive design isn’t new, but the ability to move around in a physical space around a virtual projection on a physical vehicle is leading edge, says Elizabeth Baron, technical specialist-virtual reality and advanced visualization at Ford.

Baron says an earlier decision by Ford to use wired headsets in its virtual-reality simulators, rather than adopting the CAVE 3D studio virtual-reality systems used by many automakers, is making the transition to wireless HoloLens technology much easier.

Ford isn’t specifying how much development time and money the system might save, but says using HoloLens should eliminate the weeks and months needed to create and modify clay models.

Each $5,000 headset contains a Windows 10-based computer and all of the sensors, connectivity, visualization and sound amplification equipment needed for each wearer.

Now that the beta testing is complete, Ford is rolling out HoloLens to its 10 global design labs in North America, Europe, South America, China, India and Australia.

“We may not be able to teleport yet, but HoloLens allows us to review fullsize 3D designs with designers and engineers around the world in real time,” says Craig Wetzel, manager-design technical operations at Ford.