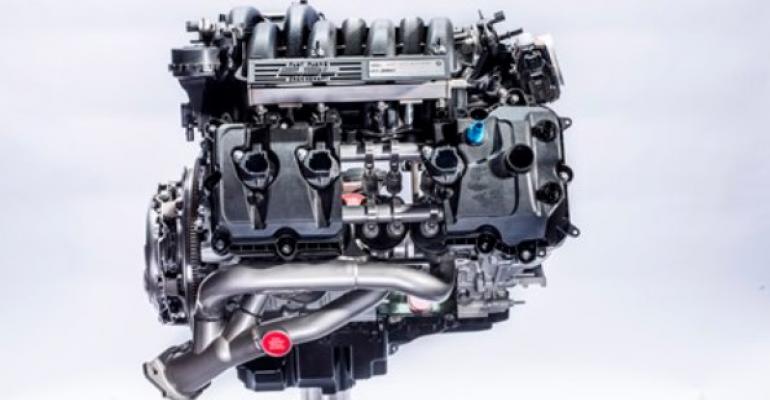 “Ford Performance now is considered an innovation laboratory for all of Ford Motor,” he tells WardsAuto at a media event here. “There are a lot of things on this car, like the carbon-fiber-composite grill-opening reinforcement, that’s technology we’re looking to cascade onto other products.”

The new 5.2L flat-plane crankshaft V-8 produces 526 hp and 429 lb.-ft. (581 Nm) of torque, making it the most powerful normally aspirated engine the automaker ever has produced that is street legal.

To achieve that output, Hameedi and his team employed a number of innovative engineering approaches, including the flat-plane crankshaft, which typically is found in high-end sports cars and racing applications.

In developing the engine, the engineering team purchased a Ferrari California, which was used as a benchmark.

Ford took an innovative approach in developing the connecting rods of the GT350, which goes on sale later this year.

The flat-plane crankshaft helps improve cylinder exhaust-pulse separation by allowing a firing order that alternates ignition events between the two cylinder banks, which improves engine breathing and allows for more power. The setup also produces an aggressive exhaust note unlike most American V-8s.

In order to improve track performance, the engine was designed with an exceptionally wide powerband, producing 90% of peak torque from 3,450 rpm through 7,000 rpm.

Other aspects of the 5.2L include a performance-enhancing 12.0:1 compression ratio and computer numerical control-machined cylinder heads housing camshafts that develop 0.04 cm (14 mm) of lift for the hollow-stem intake valves and sodium-filled exhaust valves.

“This (car) is for a guy that wants the ultimate track Mustang,” Hameedi says. “The original ’66 GT350 was a car where they took a Mustang and designed it for the track. So that’s basically what this car’s purpose is, but it turned out to be an amazing car on the street, too.”