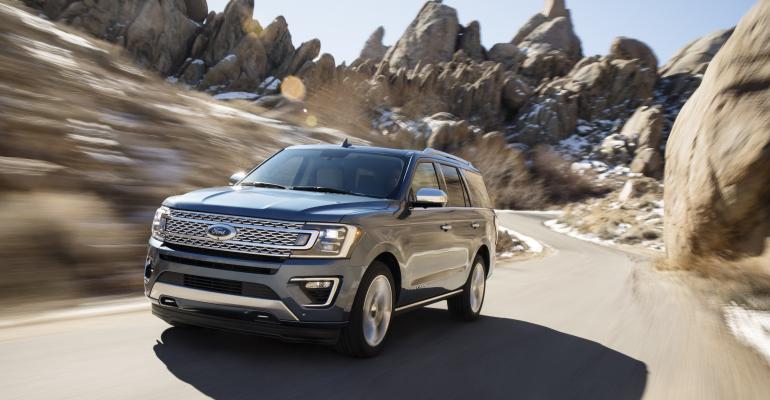 The automaker packs the &rsquo;18 Expedition with technology, including more than 40 features and driver-assist systems it says are new to the model.

Ford’s fullsize Expedition SUV gets the F-Series treatment, switching to an all-aluminum body over a high-strength-steel frame in its latest iteration that makes its public debut at the Chicago auto show this week.

The move to aluminum saved 300 lbs. (136 kg) in the new model, which comes equipped with Ford’s 3.5L EcoBoost V-6 and an all-new 10-speed automatic transmission as standard. To maximize fuel economy (no EPA ratings have been released as of yet), the V-6 includes a stop/start system as standard.

The automaker packs the ’18 Expedition with technology, including more than 40 features and driver-assist systems it says are new to the model. The list of available equipment includes the Pro Trailer Backup Assist feature Ford says makes backing up with a trailer “as easy as turning a knob.” The automaker says 50% of all Expedition buyers value towing, and 15% tow at least monthly.

Exterior styling has been softened, with corners slightly more rounded and the truck’s profile somewhat more sculpted. Inside is a driver-oriented IP with new gauges and center stack, plus luxury touches via wood trim, stitched seats and stylized door inners.

Three trim levels will be available to retail customers, XLT, Limited and Platinum. Fleet customers also can opt for an XL version aimed particularly at law-enforcement agencies and emergency responders.

The 8-seater will be built at Ford’s Louisville, KY, truck plant and hit the U.S. market this fall.