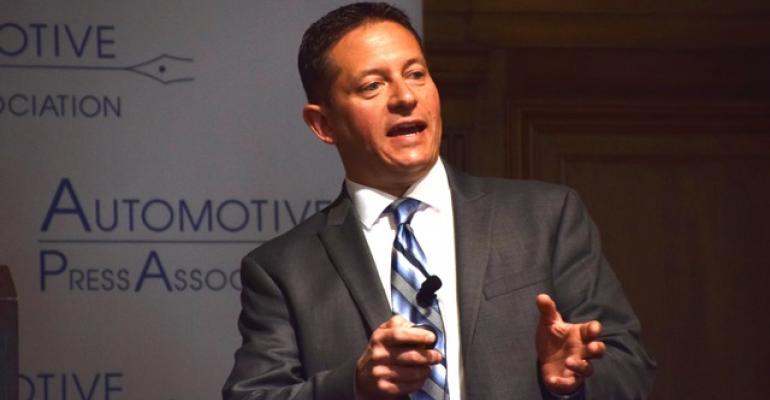 DETROIT – With onerous fuel-economy standards bearing down on the industry, it seems counterintuitive for mainstream automakers to aggressively pursue high-performance vehicles powered by big, thirsty engines capable of producing outrageous amounts of horsepower.

Not at all, says Dave Pericak, who becomes new director of the Ford Performance Group after successfully launching the all-new Ford Mustang as the program’s chief engineer.

Alluring high-output vehicles such as the forthcoming Shelby GT350, Focus RS and the GT exotic coupe create buzz in the showroom, particularly among all-important young enthusiast buyers, Pericak says in a speech to the Automotive Press Assn. here.

“It’s about attracting new customers to our brand. It’s really important that we get those younger customers,” he says. “The viability of our business depends on that.”

The segment is profitable and growing. Since 2009, Pericak says sales of performance vehicles have grown 70% in the U.S. and 14% in Europe.

He says 65% of customers buying the Focus ST and smaller Fiesta ST are coming from outside Ford. “That’s a huge conquest rate. Millennials are purchasing ST at twice the rate of the Ford brand.” Half of Fiesta ST buyers are under 35, Pericak says.

“All of it is now coming under one umbrella so we can find synergies and do a better job of bringing products and services and vehicles to market a lot faster,” he says.

Along the way, racing teams will exchange information and technology with mainstream vehicle programs, and vice versa.

For instance, the GT will be powered by a heavily modified 3.5L EcoBoost V-6 (with 70% of parts carrying over from the production version) that will be capable of at least 600 hp. This dramatic 2-seater seems destined for racetracks, but Pericak deflects several questions about such plans.

However, the modified engine has held up well on the track, winning several International Motor Sports Assn. races in the Daytona prototype class last year and also winning 24 Hours of Daytona in January, Pericak says.

In Charlotte, NC, where NASCAR rules, Ford has a new technical center dedicated to helping both racing and product-development teams. The facility has a Formula One race simulator, one of only a handful in North America.

He refers to the upcoming Shelby GT350 Mustang, with its new naturally aspirated 5.2L flat-plane V-8, and its track-ready sibling, the GT350R, which will have standard carbon-fiber wheels. “We are the first major OEM to offer this technology,” Pericak says.

Both cars also will rely on other carbon-fiber components to reduce weight. Likewise, the GT, scheduled to go on sale next year, will have a carbon-fiber tub with integrated seats and carbon-fiber body panels.

Pericak identifies Dow as Ford’s carbon-fiber supplier, and he says talks are ongoing with regard to reducing the price of the material.

The Ford Performance Group has no blank check to pursue as much horsepower as is mechanically possible. Instead, Pericak says his team views fuel economy as very important.

“We can’t just run rogue and not pay attention to fuel (economy). Look at what we’re doing even with the GT. It’s a bold statement to put in a V-6 where normally V-8s are playing,” he says. “Believe me, Raj Nair (group vice president and chief technical officer) is on me all the time making sure I am meeting the fuel-economy standards.”

Pericak says he sees the “horsepower war” continuing to rage on among automakers. But going forward, he believes the focus will shift from the overall peak number to better managing the horsepower that is achieved and channeling it more effectively to the road.

For now, his group does not include the Lincoln brand. But once Ford’s luxury brand has become more re-established, Pericak says he could see a place for it within the Ford Performance Group.