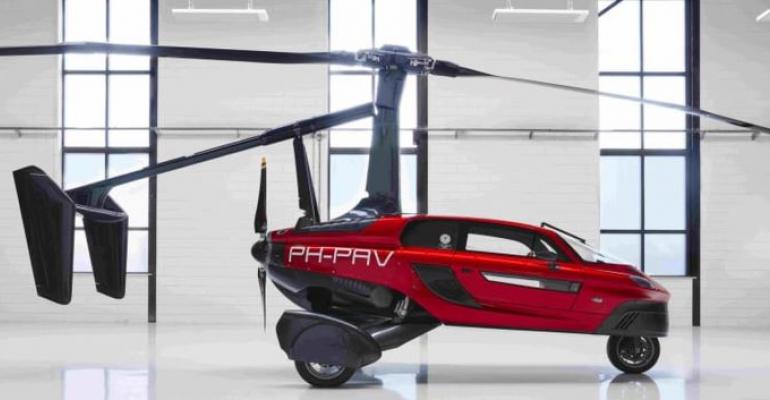 Flying Car to Debut in Kuwait; Takeoff Due in 2020

The first PAL-V Liberty Pioneer model on the market will be a limited edition, with 90 units selling for $599,000. It will be followed by the PAL-V Liberty Sports model costing $399,000. Operators will need both a driver’s and a pilot’s license.

Netherlands-based PAL-V’s flying car will have its premier in Kuwait on Nov. 12.

First deliveries of the Liberty Pioneer in Europe are anticipated in 2019. PAL-V is taking orders for the flying car, saying buyers will be asked to sign a purchase contract nine months before delivery.

The first PAL-V Liberty Pioneer model on the market will be a limited edition, with 90 units selling for $599,000. It will be followed by the PAL-V Liberty Sports model costing $399,000.

The option to purchase the Pioneer models costs a non-refundable $25,000 deposit and includes 10 operating lessons. The Sports model deposit is $10,000.

Operators will need both a driver’s and a pilot’s license.

The PAL-V is not a helicopter. In flying mode it is a gyroplane, which means the blades are powered only by the wind. As long as there is airflow they rotate and act like a continuously open parachute.

“It takes a lot of testing to prove that the PAL-V Liberty complies with the regulations," Stekelenburg says in a statement. “We deliberately chose to design, engineer and manufacture our flying car with proven instead of immature technologies, complying with existing road and air regulations.

“This approach focuses on safety and enables a realistic and imminent product delivery date.”

PAL-V will hand over the keys of the PAL-V Liberty to the first customers once full certification is granted in 2020, CEO Robert Dingemanse says. “In the meantime, PAL-V's pioneer clients are building experience at flying schools around the globe in preparation for deliveries. For them, door-to-door fly-driving is closer than ever.”

For takeoff the maximum roll is 500 ft. (180 m) and the company recommends a runway of at least 900 ft. (280 m). The airstrip can be significantly shorter for landing, it says, “even so short as to permit nothing more than vertical landing in more windy conditions.”