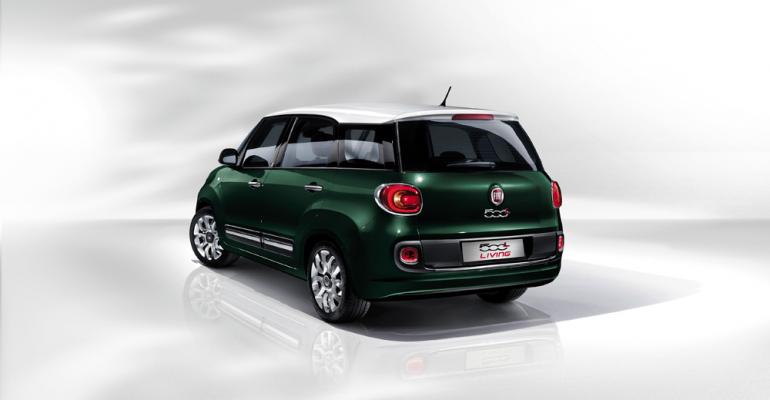 Designers want to preserve the brand&rsquo;s Italian heritage set by the 500 compact, but future models need to cater to American sensibilities.

BALTIMORE – Fiat’s return to the American market means designers must think beyond European tastes for its upcoming cars.

The 500, called the Cinquecento in Europe, retains the European styling that it has carried for decades, but future Fiat products will cater more to American sensibilities.

That begins with the 500L, which like its smaller 500 counterpart, is classified as a subcompact but is designed with a roomier “loft-like” feel for American tastes.

Fabrizio Vacca, a Turin-based Fiat designer visiting the U.S. for the first time, tells WardsAuto on the sidelines of a media launch for the 500L here that Chrysler designers had a lot of input on the 500L’s development – “to know what customers in the U.S. wanted. We wanted to make a product that could be for families in Europe but also for young couples in the U.S.”

For example, the 500L offers more backseat legroom and a higher roof that runs on a horizontal plane and provides more headroom than the 500. The boxy styling not only was designed to sway admirers of the similarly styled Kia Soul, Scion xB and Nissan Cube, but also to provide ample interior space for buyers who generally consider a C-segment compact.

According to a future-product plan released by Chrysler-Fiat CEO Sergio Marchionne, the Italian brand is due to receive six new models in North America in the coming years.

Vacca does not say if the future Fiat products will follow the 500L’s design direction, but “the philosophy is to globalize more and more the brand, so of course we are working in that way. Working for Fiat means that we have to keep in mind tradition and heritage. (But) this product has to bring something more.”

The 500L also trades on “emotional” buyers looking to make a statement with their purchases, he says. Among the 500L’s competitors, the Mini Cooper remains a leader in the boxy compact segment, delivering 45,111 units in the U.S. in 2012, WardsAuto data shows.

“That segment tends to be boxy because they all want to make a very roomy space and size, but they want to keep the car in the compact size,” Vacca says. “The hard part, because the Cinquecento is not boxy at all, was to find the right shape. But that’s also why we built the rearview window to make the car look more rounded.”

Though subtle, the 500L adds extra storage spaces in the cabin, including an armrest cubby and a second compartment on the passenger side, neither of which is found in the 500.

“European people like very well-designed things,” Vacca says. “But for the interior, they don’t care very much about functionality. It has to be beautiful. But for the Americans, they do want a lot of functionality. So we had to find the right balance.”