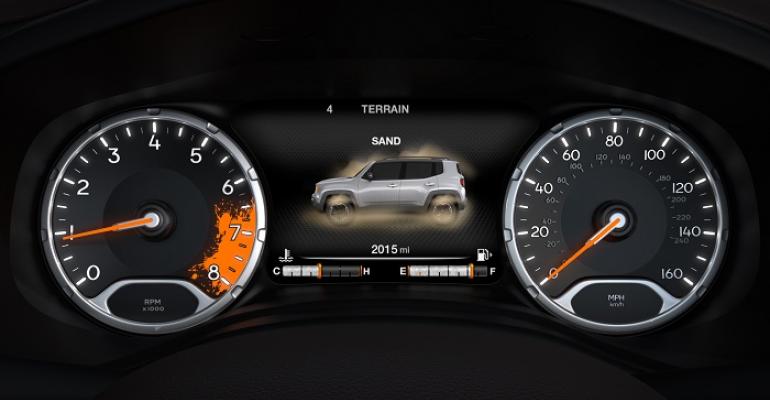 The splatter from a paintball, a genuine Texas Ranger&rsquo;s badge, the warm lights of the Middle East and Lake Michigan stones are just some elements that have influenced recent FCA interiors.

DETROIT – While he still finds inspiration in the industry that employs him, FCA’s Vice President of Interior Design Klaus Busse and his team frequently look outside autos when crafting cabins.

That’s no surprise if you’ve had a chance to view the automaker’s latest interiors, oftentimes filled with unique and sometimes quirky details.

Inspiration from things as disparate as airplanes, furniture, nature and the game of paintball have influenced recent Chrysler, Dodge, Jeep and Ram interiors, Busse tells attendees here at the 2015 WardsAuto Interiors Conference.

“Yes, it is indeed a paintball splash,” Busse says of the “redline” on the ’15 Jeep Renegade’s tachometer. The Renegade is a Ward’s 10 Best Interiors’ winner for 2015. “A designer thought it was funny and put it in the car. And we kept it in the car, which is the cool thing about Chrysler these days because we thought it would not pass the final reviews, but it did,” he says.

Another element that brought about a recent FCA interior was a Texas Ranger’s badge, whose star design can be seen all over the interior of the concept Ram Texas Ranger Edition pickup.

Ram Chief Designer Ryan Nagode discovered the Texas Ranger’s badge originally was stamped out of a Mexican peso so “Ryan went on Ebay and bought four of these coins,” Busse says.

FCA’s designers frequently find inspiration for interiors in nature, both near and far from home.

American natural wonders inspired elements in the Jeep Grand Cherokee’s interior, including the beauty and colors of the Grand Canyon, which resulted in the Grand Cherokee Summit grade’s real copper trim, while a series of smooth stones from Lake Michigan recall the surface look of the SUV’s armrest.

Busse and his team of designers are frequent overseas travelers, taking inspiration from their journeys back to the studio.

He says the warm lights of the Middle East spurred the Moroccan Sun accent stitching available on black-leather seats in the Jeep Cherokee and a visit to China’s approximation of Shangri-La, a city in the Yunnan province near Tibet, resulted in an interior in a Beijing auto show concept vehicle.

But Busse and his designers’ travels don’t always manifest in a way obvious to consumers.

He says there are many functional lessons to be gleaned from the people he meets.

A longtime fan of Formula 1 racing, Busse finds F1 teams inspirational, citing the dedication of the all-night pit crew at 24 Hours of Daytona and the attention to detail he saw at an F1 race in Austin, TX, as a guest of Ferrari.

“Every single wheel per track has a different tire pressure for every vehicle, which is just amazing,” he says. “So those unsung heroes do a fantastic, amazing job. Again, it’s all in the details."

After visiting a Buddhist temple near Seoul, Busse came away impressed at the dedication of artisans doing traditional painting there. “They don’t paint to sell the image, they paint to get better, and then they basically get rid of it and start another painting.”

Busse picked up a paint brush at the temple, and engaged in pottery-making at a different temple, not surprisingly crafting a Jeep out of clay.

“The human interaction is really the special part about these trips…it’s why we at FCA create interiors with soul.”