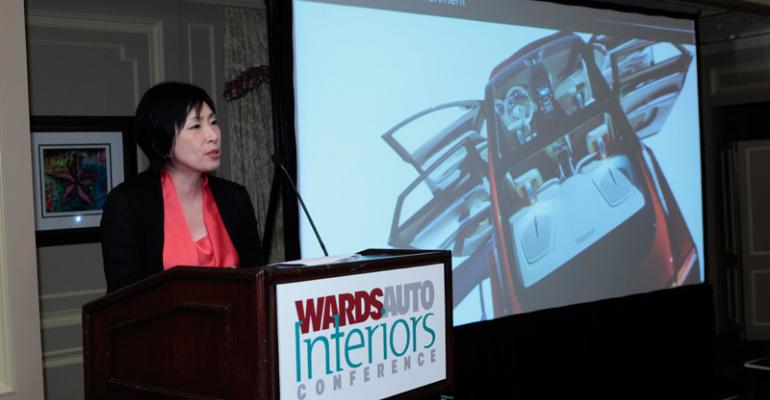 Simplicity in design and lack of noise, both audible and visual, will define the luxury interiors of tomorrow, panelists say.

DEARBORN, MI – The future of luxury interiors is centered on an "emotional and tactile experience," designers say, and more minimalist cabins are foreseen.

"I'm not saying that technology is bad...but (luxury) is not about a long list of items," Marc Tarling, design manager of General Motors’ Cadillac Advanced Studio, says here at the 2012 WardsAuto Interiors Conference.

Tarling believes technology is not the destination but the portal to future luxury interiors, noting the Internet allows a person to view a high-end fashion show in New York from the comfort of his own living room or download an app enabling whiskey to be sampled virtually.

Tarling shows an image of the Cadillac Ciel Grand Touring concept’s interior, which lacks hard buttons, instead integrating many features into touch controls.

"This is what I feel is luxury," Tarling says of the 4-seat convertible’s cabin.

Kang points to the MKZ concept as the future of Lincoln interiors, noting the car’s thin instrument panel – the slimmest of any Ford or Lincoln, and the spaciousness created by eliminating a traditional shifter, which she says takes up as much room as a half-gallon of milk. The MKZ concept uses push-button controls.

Thin seats, which increase interior room, particularly in the second row; a 10-in. (25-cm) liquid-crystal display; the “finest leather;” and chrome processed in a more environmentally friendly way, are seen as future Lincoln interior features, as well.

There's “too much noise in design,” notes Kang's colleague, Susan Swek, group chief designer-color, materials and interior for Ford and Lincoln. She contends a luxury experience can be had so long as vehicle cabins pique all the major senses in a pleasing way.

In the years ahead, car and truck cabins should focus on simplicity and balance, be timeless in their designs, provide occupants with the ability to express themselves and "evoke the feeling it's been especially designed for you," Swek says.

Leather seating, with added or natural aromas, will be popular, he predicts, as well as the more supple aniline and semi-aniline leathers already starting to take hold in the market.

Vehicle seats will feature more structured designs, similar to those in the '11 BMW X5 and Lexus CT 200h, in order to cut down on the amount of material required and improve styling, Oilar says.