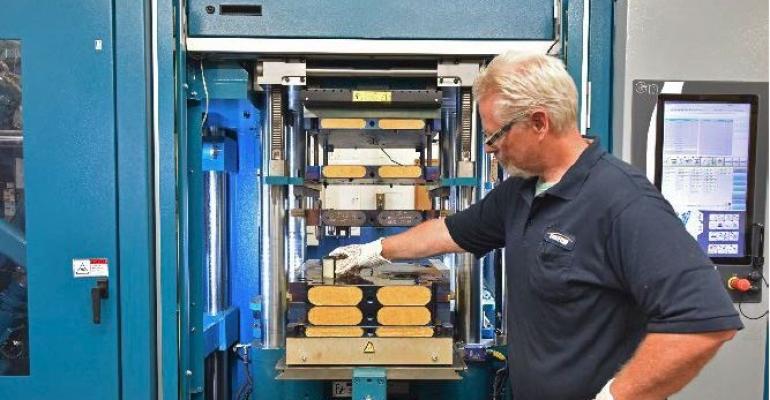 Tennecoʼs deep knowledge in engineering rubber used in suspension bushings, mounts and subframes has made their adaptation to electric vehicles easier. Meanwhile, Tenneco will close its Federal-Mogul acquisition by year’s end.

“This business could transform how suspensions are done,” Tenneco Chief Technology Officer Ben Patel says during an R&D center lab tour in northern Ohio. “This is 15% to 20% of what we do on its way to half” of the supplier’s ride-and-handling business.

“We didn’t have to learn how to be an engineered elastomer firm,” says Joe Cerri (below, left), who works in NVH products and technologies. “We had the tools in place.”

Battery-electric vehicle programs began asking for quotes in 2013. “It was on the horizon, and we decided to participate in those vehicles,” Cerri says.

“Masking noise and vibration has allowed us to help (customers) build a vehicle that’s quiet,” Cerri says. “In the past, there wasn’t that level of sensitivity because you had an internal-combustion engine that was doing its thing and vibrating. That’s no longer present.”

NVH challenges in EVs include engineering different top mounts and suspension bushings. There is tremendous sensitivity to high-frequency noises. The total mass of an ICE and an EV can be similar, but the distribution of the mass differs.

“The fact that they have to package (EVs) for that battery pack makes for geometry changes,” Cerri says. “For example, we ended up with shorter links that drive high articulation angles” supporting the vehicle knuckles. “Low-mass components can save the mass for drive units and battery packs.”

Making inner and outer bushing sleeves from aluminum or engineered plastic instead of steel could save 30% to 40% in mass, he says. During the tour, Tenneco engineers show an integrated R&D facility. Computer-aided engineering and finite-element analysis, rubber mixing and durability testing are done under one roof. The facility has 80 employees. Since opening in 1972 in this farming hamlet 60 miles (97 km) west of Cleveland it has been updated several times.

Based on 2017 revenue, one spinoff will be a $6.4 billion aftermarket and ride-performance company. It will consist of Tenneco Ride Performance and Federal-Mogul Motorparts.

The other will be a $10.6 billion powertrain technology company. It will consist of Tenneco Clean Air and Federal-Mogul Powertrain.