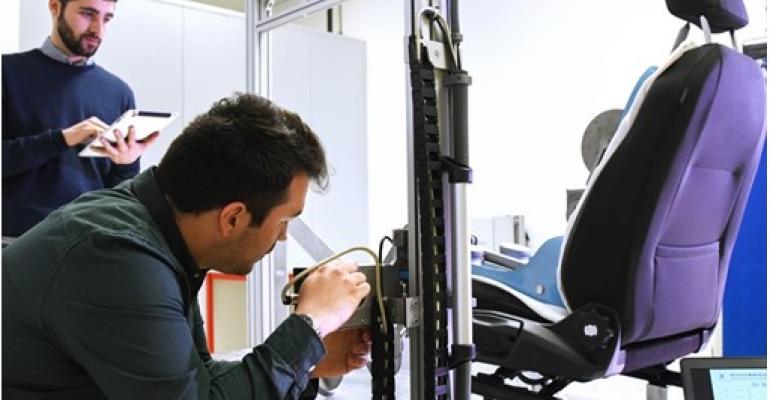 To ensure car seats remain comfortable and sturdy after driving thousands of miles, engineers at the SEAT Technical Centre in Martorell, Spain, perform five rigorous tests during the 3-year development of each seat.

Spanish automaker SEAT likes to get a little behind in its orders, but only when it comes to designing the seats in its vehicles.

To ensure car seats remain comfortable and sturdy after driving thousands of miles, engineers at the SEAT Technical Centre in Martorell, Spain, perform five rigorous tests during the 3-year development of each seat.

It starts with a group of men and women of all sizes and shapes who are paid to sit down on the job – 700 times a day. Engineer Javier García, in charge of SEAT’s car-seat testing, says the professional testers reproduce the action of getting in and out of a car 6,000 times a week.

“Each tester repeats this action 700 times a day to simulate what a car seat endures over a period of five years.” García says in a statement. “Some of them wear jeans with rivets and buttons on the back pockets or reinforced seams.”

Another test, reproducing multiple rubbing motions on a car seat, is carried out in the lab and simulates the weight of a 165-lb. (75-kg) torso.

The test is deemed successful if the seat looks the same and has its original properties.

To test the seats in extreme conditions, a car is shaken intensely inside a booth for 225 hours nonstop to reproduce the normal use of a vehicle over a distance of up to 186,411 miles (300,000 km).

“Our work consists in evaluating the vehicle before, during and after the test to ensure its characteristics haven’t changed and it hasn’t suffered any breakage or damage,” García says.

This includes an engineer inside a chamber at -4° F (-20° C) analyzing the performance of a heated seat on a SEAT Arona. He uses a thermographic camera to verify it reaches a comfortable temperature in just three minutes, going up to 104° F (40° C) 15 minutes later.

The heat map also shows the heat is evenly spread over the entire surface, which contributes to the comfort of the driver.

Garcia says there is an ideal sitting position to drive safely and comfortably. His team of engineers measures up to 20 indication points on a car seat to verify the correct placement of the torso, the distance to the headrest or the angle of the driver’s femur.

A seat model passing this demanding regimen is considered production-ready.