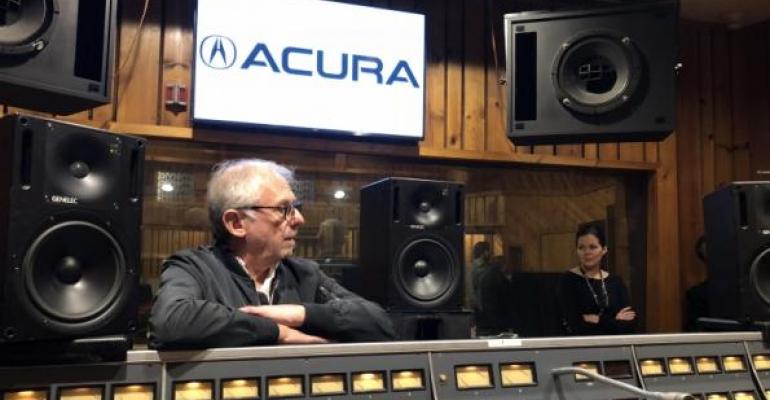 “It brings the quality of a recording studio into the vehicle,” says Panasonic’s Tom Dunn.

NEW YORK – Fifteen years ago, Tom Dunn of the Panasonic electronics company sat in on an industry panel discussion during which eight-time Grammy-winning sound engineer Elliot Scheiner rapped the quality of automotive audio systems of the day.

“He talked about the precision he strove for in the studio, and said, ‘I hate the way it ends up coming across in a car sound system,” Dunn tells WardsAuto. “I thought, ‘Wow.’”

It was the start of a long-term collaboration. “We had to understand each other, us as an automotive supplier, him as a sound engineer. Using Elliot’s standards allowed us to think differently and led to us, in meetings with OEMs, to talk more about (end-user) ‘experiences’ rather than strictly the hardware. Otherwise, the discussions get dry.”

The Panasonic-Scheiner collaboration has led to various automotive products over the years. The latest is the all-new ELS Studio 3D audio system. Featuring proprietary technology that includes ceiling speakers, the system is a high-end option in the redone ’19 Acura RDX midsize luxury SUV. It goes on sale this summer.

“It brings the quality of a recording studio into the vehicle,” Dunn says.

Panasonic and Acura demonstrate the system during an event here at the Power Station, a legendary midtown Manhattan recording studio and something of a stomping ground for Scheiner.

“Working side-by-side with Panasonic Automotive engineers and the teams at Acura, we were able to create a system that is both acoustically sophisticated and emotionally intimate,” Scheiner says.

ELS Studio 3D includes 16 speakers, 16 channels and 710 watts. But it is more than stuffing a car with a bunch of speakers, says Mark Ziemba, Panasonic Automotive’s principal engineer and an enthusiastic audiophile. With a great ear and big smile, he avidly runs through all sorts of tunes while showing off the new sound system in a RDX hauled up in a freight elevator to take center stage  on the studio’s main floor.

“Sometimes lots of speakers isn’t good,” he says, noting an overabundance can create a mishmash of acoustical crosscurrents.

Vehicle interior layouts can distort high-quality sound delivery. That’s because the sound waves from, say, door-panel speakers can deflect off seats and the sides of the center console.

The system directs sound to specific areas of the cabin through multizone audio capabilities. The DSP multichannel amplifier is equipped with Panasonic’s Acoustic Motion Control technology that allows individual speakers to be independently optimized for ideal performance.

Accordingly, the ELS Studio 3D system is configured so that “sound from all the speakers arrive at the ear at the same time,” Ziemba tells WardsAuto.

The overhead Highline speakers are exclusive to Acura. Their placement in the ceiling sends more direct sound to vehicle occupants. “Music sounds like it is floating in the air,” Ziemba says.

That’s because those speakers are a tight fit. They need to squeeze between side airbags and a  panoramic sunroof . A lot of occupied real estate is up there, so speakers can't take up too much space. Compact as they are, they still spread the sound, says Hiroyuki (Hank) Morimoto, Panasonic’s manager-speaker engineering. He designed them. Based now in Farmington Hills, MI, he has designed speakers for 36 years.

“Usually a small speaker like this provides a direct output,” he tells WardsAuto. “But we created this one to have a wide range.”

Frey proudly speaks of equipping the new RDX with ELS Studio 3D. “Panasonic came to us and said, ‘This is the next thing.’ It was Acura’s job to make it happen.”

The result: “It’s almost like a band is in the car with you.”

Frey cites other sound-related advancements intended to make the cockpit a soothing spot, even if the sound system is off.

An example is an active noise-reduction system to keep out engine noise. Also, an active sound-creation system “fills in the valleys of acoustical waves.”

Contributing to the quiet cause is a new vehicle body structure containing more high-strength steel. It increases chassis rigidity, which, in turn, keeps the cabin quieter, Frey says.

The redone CUV from Honda’s luxury brand is the first RDX the automaker developed strictly in the U.S. Project participants included designers in California and engineers in Ohio. Acura will build the vehicle in East Liberty, OH.

The Power Station recording station got its name from the building’s original use as a Consolidated Edison substation. Then it became “one of the most popular recording studios in New York,” says its manager, Ian Kagey, a graduate of Boston’s Berklee School of Music which now owns the facility thanks to a generous donor.

Artists who’ve recorded there over the years include Bruce Springsteen, the Rolling Stones, the Ramones, Blondie and David Bowie.

Scheiner, relaxing at the end of the evening and playing assorted songs in the special space that is the Power Station's main recording booth, talks about artists he's worked with. Among his favorites: the duo Steely Dan. He wishes they stayed together longer. He thinks they had more music in them as a team.