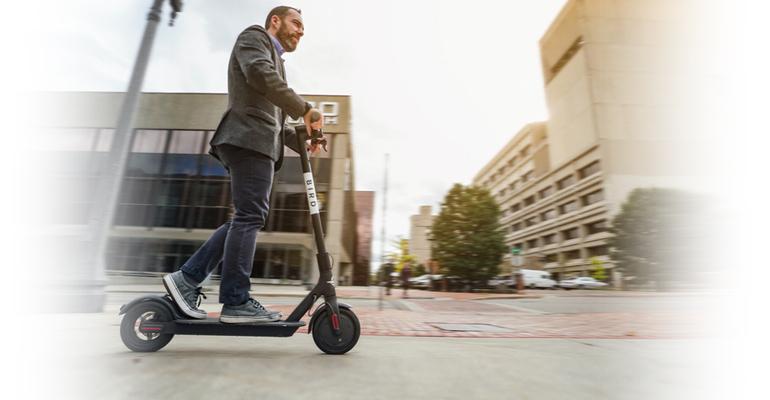 A flock of Bird Scooters landed in Lansing, Michigan in September 2018.
Vehicles

Electric Scooters vs. Cities: The Next Battle for the Future of Mobility

Meeting the quality of life needs of growing city populations in Middle America is directly tied to offering alternatives to a still prominent car ownership culture. This will take time.

But, over the last five years, Middle America’s traditionally less dense downtown areas, like in Detroit and Cleveland, are feeling the same pains.

Throughout the 20th Century, these cities, along with several other mid-sized cities in Michigan, Ohio, Indiana and Pennsylvania, made up the heart of America’s automotive industry. During this time, they also all experienced an unmatched car ownership culture that was an essential part of the 20th century American dream. But now, in these same cities, that same culture has created unnecessary costs and congestion for city-dwellers chasing a new 21st century American dream.

To put it simply, 90% of those Americans will choose to reside in cities by 2050 (according to the United Nations). And, 90% of American cities don’t appear ready for this population surge.

Meeting the quality of life needs of growing city populations in Middle America is directly tied to offering alternatives to a still prominent car ownership culture. And, this will take time as it continues to take a toll on road infrastructure, revenue models and energy systems.

While there is no quick fix, there is one popular trend that more cities are embracing as a way to begin conversation around transportation alternatives. That trend is micro-mobility, or the use of compact vehicles to enhance the personal mobility of one passenger at a time. With urbanization on the rise, micro-mobility options reduce car usage for short trips, fill first mile/last mile transportation gaps, and alleviate city parking issues.

Currently, dockless electric scooters are the most headline-grabbing micro-mobility solution. If you’ve spent any time in a major, or even mid-sized, American city this fall, you’ve seen or have almost been hit by one of these two-wheeled motorized thrill-rides cruising down a sidewalk, or sitting on a random street corner, waiting for the next user.

Yes, ride-hailing is still a popular option and bike shares continue to gain momentum, but scooter companies like Bird, Lime and Spin are cashing in on what has become the most convenient urban mobility trend. In fact, Lime and Bird are both growing at a faster rate than Uber or Lyft in their early days when you compare investment levels and customer adoption. In July, after a recent round of investment led by Uber and Alphabet, Lime is now valued at $1.1 billion.

Rides usually start at $1 to unlock a scooter and 15 cents a minute afterwards. Most trips end up costing around $2-3, which is similar to the cost of using public transportation.

A nationwide survey found that 70 percent of city-dwellers like having access to dockless electric scooters and recent studies have shown the adoption rate of scooters is exponentially higher than other shared mobility options.

Many cities know that new mobility solutions, like e-scooters, e-bikes or e-rickshaws, are needed to alleviate congestion and parking. They also know their citizens mostly like having these solutions nearby. But, many city officials continue to grapple with the startups creating these solutions because of a perceived lack of communication around when scooters are dropped into a community. Many residents are also becoming frustrated with scooters being left in the middle of sidewalks, in front of doors and laying in bikes lanes. Dozens of community leaders are putting a cap on the number of scooters that can be operated at one time due to sidewalk collisions leading to injuries. These scooters can go as fast as 15 mph within a range of 38 miles.

The real issue is that cities are designed and governed for cars first, other vehicles second. And, these scooters are having trouble fitting in.

As Alex Davies reported in Wired in June, “City officials shouldn’t limit the scooters. They should do everything they can to benefit them. Namely, rejigger San Francisco’s infrastructure—every street, every block—with their riders in mind. Because a city made for scooters is a city ready to embrace a cornucopia of mobility options that don’t require sitting in a car, clogging the streets, and choking the planet. A city made for freedom.”

Instead of banning new technologies, we need to better understand how crucial their impact is on cities.

The City of Detroit is taking a forward-looking view on scooters to understand how dockless shared mobility services can make it easier for Detroiters to get around. At CityLab Detroit, Mayor Duggan announced that Detroit will pilot a mobility data project. The goal? Create a standard for cities and mobility companies to collect data. Ultimately, this will move Detroit and others cities toward measuring their progress in reducing congestion, expanding equitable access to transportation, and improving safety.

Scooters and other micro-mobility options are a convenient replacement for short-trips. They make the city more accessible to travelers. And, as cities become denser, micro-mobility modes of transportation could replace owned cars, and alleviate congested public transit. Scooters are also a more viable option for lower-income groups. They’re inexpensive and not anchored to one neighborhood.

So let’s give them a chance and let me know what you think about Micro-Mobility.