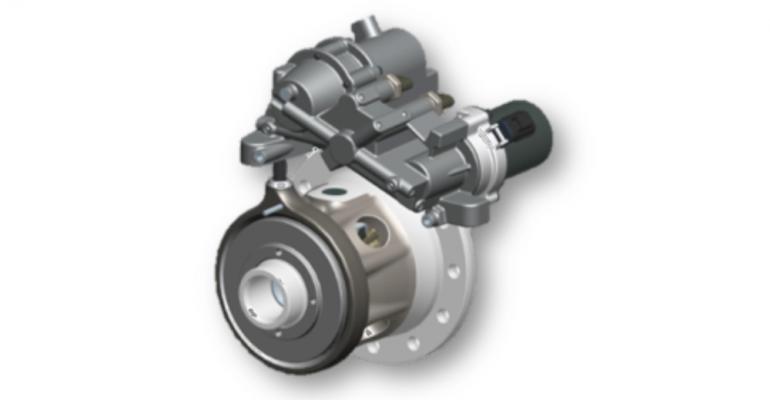 IntelliTrac, which will bow next year on a vehicle from an undisclosed full-line OEM, is not solely reserved for the motoring elite. Plenty of everyday vehicles are expected to use the technology.

“For luxury and performance vehicles, this is going to become the price of entry by the beginning of the next decade,” says Rick Kukucka, product director-Chassis/Driveline at Eaton.

But Eaton’s IntelliTrac, which will bow next year on a vehicle from an undisclosed full-line OEM, is not solely reserved for the motoring elite. Plenty of everyday vehicles are expected to use the technology to improve grip or provide greater differentiation between selectable drive control modes, an increasingly popular item especially on hot-selling SUVs and CUVs.

There are a number of eLSD systems in the market today from axle and driveline suppliers, and this not the first system Eaton has rolled out. Eaton’s history in differentials dates back to Joe Eaton’s first products in 1911, which included Ford Model T differentials. But IntelliTrac represents the supplier’s latest and greatest electro-hydraulic offering. It traces its origins back to about 2005, when the first modern Eaton eLSD appeared as standard equipment on the ’05 Jeep Grand Cherokee.

Kukucka says shortly after the Chrysler application was launched, the U.S. Dept. of Defense appealed to Eaton for an eLSD system it could deploy on vehicles in the battlefield. The military’s eLSD system brought a number of new requirements that paved the way for IntelliTrac, the most prominent of them being improved responsiveness to 100 milliseconds from 250 milliseconds on its EGerodisc predecessor.

The system gets its superior speed thanks to highly efficient pumping, Kukucka says, compared with the electric motors of some other eLSD units. He says the system’s accumulator, an Eaton design, further contributes to its speed. Hydraulic pressure inside the Eaton eLSD also is relatively high at 400 psi (2,758 kPa), and proprietary friction materials on the clutch plates improve durability.

“The clutch plate sort of wears in, and then flattens out,” Kukucka says. “We see very little wear.”

Accuracy of the software controls is another key element of the system. Eaton control algorithms quickly recognize precisely how much torque, and to which wheel, is necessary.

With the military delivery in the books, the industry spun out with the recession in 2009. Instead of cutting back on R&D in the segment, Kukucka recalls, Eaton chose to build out an eLSD development team in anticipation of a rebound in automaker spending after the economy improved.

“We positioned ourselves to come out of the downturn ready to supply OEMs with new technologies,” he tells WardsAuto during an interview inside Eaton’s Innovation Center here.

Kukucka considers the development team a unique advantage to Eaton, because its expert engineers can quickly adapt an eLSD system to vehicles across segments.

“It’s a lot of iterative work, but we built it into the development team,” he says, adding that the team includes highly qualified test drivers for validation work.

“So we can size it for anything from a C-segment car to a Ford SuperDuty,” Kukucka says.

Kukucka says federally mandated stability control, as well as myriad other new electronic safety and performance technologies on today’s cars and trucks, makes IntelliTrac possible. The system’s software mates up with those other technologies to form a driveline ecosystem.

“It’s a great technology for electronic stability control,” Kukucka says. “It does not compete with it.”

Rapidly shifting torque between the wheels makes eLSD systems highly desirable in snow and on ice, but it also enhances cornering on dry pavement for performance handling characteristics. ELSD systems are quiet, too, which makes them attractive to luxury OEMs looking to keep NVH in check.

Kukucka says another key advantage for IntelliTrac is its compactness, which is especially desirable for front-wheel-drive applications. It is 20 lbs. (9.1 kg) lighter than many competing electro-mechanical systems and the power draw for IntelliTrac is 20 amps, compared with 40 amps for some other systems.