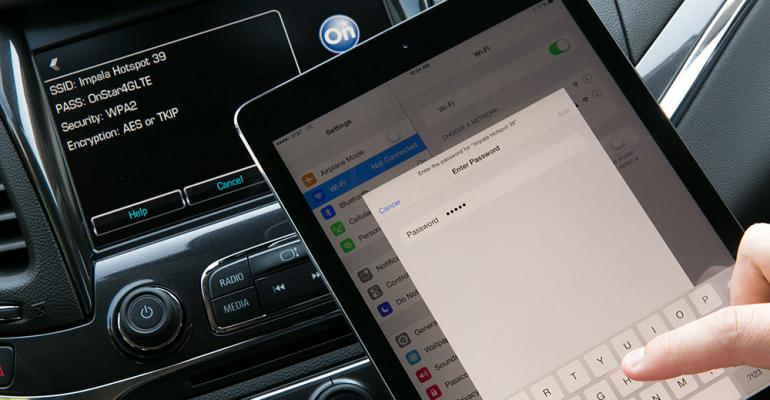 All but three GM vehicles will offer Wi-Fi capability for &rsquo;15, meaning anything people&nbsp;can do with their laptop, tablet or smartphone at home or work can be done in their vehicle.

ROSEMONT, IL – General Motors stops short of predicting how many of its OnStar subscribers will sign up for the longtime telematics service’s new 4G LTE Wi-Fi connection from AT&T, but says 98% of buyers have agreed to the terms and conditions necessary for access to the technology.

“It is still early in the rollout, but we take that as an indication it is very popular,” says OnStar spokeswoman Rebecca White.

Another positive sign: 90% of tablet users do not purchase data plans, so they tap Wi-Fi connections exclusively. GM believes its cars, trucks and CUVs will become that Internet pipeline, especially given Americans spend about 450 hours annually in their vehicles. The service has a range of 50 ft. (15.2 m) outside of the vehicle.

OnStar spokesman Stuart Fowle says GM decided to offer the Wi-Fi service not because its customers demand it today, but because the automaker thinks they will very soon.

“We’re being proactive,” he says during a preview of the technology at a meeting of the Midwest Automotive Media Assn. here.

All but three GM vehicles will offer Wi-Fi capability for ’15, meaning anything people can do with their laptop, tablet or smartphone at home or work can be done in their vehicle.

The Chevy Camaro sports car and the Chevy Traverse, Buick Enclave and GMC Acadia large CUVs will add it for ’16. Large pickup trucks and SUVs also will offer the service, but not until the middle of calendar 2015.

The Chevy Malibu midsize sedan and Chevy Impala large sedan lead the rollout, followed by the Buick Regal sports sedan and Buick Encore small CUV. Others will follow according to their particular launch cadence, peaking at 30 vehicles in the model year for the broadest rollout of the technology in the industry.

Chrysler and Audi are among automakers in the U.S. also offering Wi-Fi connections in their vehicles.

The OnStar 4G LTE hardware is factory-equipped and standard. GM owners will be given a 3-month/3-gigabyte free trial of the service, after which time there will be a $5 to $50 monthly fee based on the amount of Wi-Fi access the OnStar subscriber chooses.

Access is not limited to AT&T data plan users, but AT&T customers can take advantage of an plan that would add OnStar 4G LTE to their GM vehicle for $10 per month and the data plans would be pooled.

OnStar officials say the least expensive plan will offer 200 megabytes of data, or enough access to stream more than 6.5 hours of music, surf the Internet for 13 hours or send more than 10,000 emails without attachments. The biggest access plan is for 5 GB.

Even the smallest 300 MB plan offers sounder connectivity than a smartphone, according to OnStar, because the vehicle itself is a natural shield to data frequencies. With OnStar 4G LTE, a “shark-fin-like” housing atop the vehicle serves as a powerful receiver.

However, OnStar officials say, much like a smartphone there will be obscure places where the connection may fail. Although, again, count on a wider coverage area than the average smartphone.

Some Antennas Gain Girth, But System Snap to Use

One drawback to the technology may be the increased size of the antenna housing on some ’15 GM models still awaiting redesigns, such as the Chevy Cruze small car and its platform mate, the Chevy Volt extended-range electric vehicle.

During an earlier demonstration of the technology in Detroit, the antenna housing on a Volt was much larger to accommodate pieces of the 4G LTE hardware and it appeared less integrated than the fin-like housing of an Impala parked alongside.

But hooking up to the system proves to be a snap. A driver presses the OnStar button of an Impala touchscreen to reveal a password, which is entered into an iPhone Wi-Fi setting and speedy Internet ensues.

The take rate for OnStar 4G LTE service may depend on the brand, too. Because Buick tends to attract an older buyer, it may see fewer subscribers. Chevy owners likely will take to it the most, given the brand’s young, family-oriented buyer set.

A special $5 all-day pass for the Wi-Fi service likely will be popular, too, OnStar says.

Fowle admits OnStar and GM are aware of potential critics of the technology who may argue it could lead to driver distraction, but they expect common sense to prevail.

“We can't stop people from shaving or putting on their makeup now, and we can only hope they won’t do something dangerous with Wi-Fi connectivity,” he says.

It isn’t likely the Wi-Fi service will curtail the purchase of profitable entertainment-system options, which cost in the neighborhood of $3,000.

“What this does, is raise the possibility for watching Internet movies and shows on those (factory-installed) screens,” he offers, “because you can hook your tablet up to the entertainment system.”

In preparation for the new technology, 30,000 GM dealership employees will take online courses to learn the system. The training began this year and will continue through December. Another 55 certified OnStar advisers have undergone 8,000 hours of training and will travel to dealerships to further help familiarize sales personnel with the technology.

OnStar boasts 7 million global subscribers in four countries, including 6 million in the U.S. and Canada where GM will make the 4G LTE service available. However, only owners of equipped ’15 vehicles will have access to the technology.

– with James M. Amend in Detroit