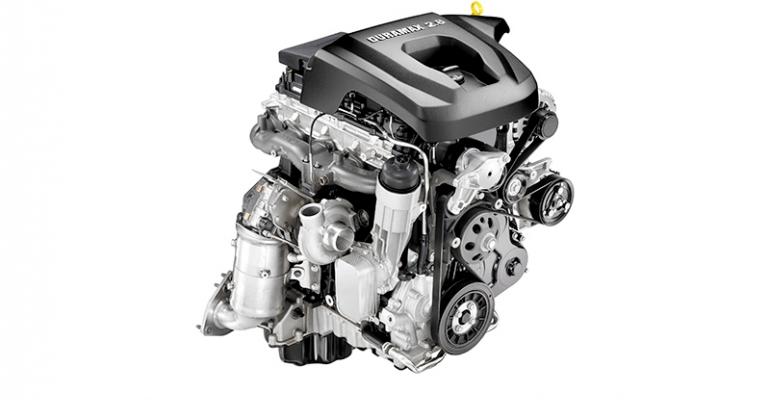 Block, head, pistons, connecting rods and crankshaft are among carry-over parts on 2.8L diesel slated for Chevy Colorado and GMC Canyon, but unique features include an exhaust brake and torque converter with vibration-absorbing qualities.

MILFORD, MI – Compact pickup-truck shoppers who need to do a lot of towing can mark this on their calendars: General Motors’ 2.8L Duramax turbodiesel 4-cyl. will be available this fall in the U.S.

Dedicated solely to truck applications, the engine has been offered in Thailand, Australia and South America since 2011, was updated two years later and now receives a number of upgrades for its U.S. debut in both the Chevrolet Colorado and GMC Canyon.

The all-new trucks, assembled on three shifts in Wentzville, MO, have been selling well since their arrival in October, combining for 47,502 deliveries through May, according to WardsAuto data. Still, they lag behind the segment-leading Toyota Tacoma’s 72,842 units through May.

GM expects its offering of the first modern diesel in the compact or midsize truck sector to become a competitive advantage that should find favor with 10% of Colorado and Canyon customers. Engines will be shipped from GM’s plant in Rayong, Thailand.

Tow ratings will be available closer to launch, but count on them to exceed the 7,000-lb. (3,175-kg) threshold of the current 3.6L naturally aspirated gasoline V-6 when paired with the Z82 trailering package.

The V-6 easily trumps the 181 hp (at 3,400 rpm) of the diesel 4-cyl., but the Duramax has the upper hand in the measure that truly matters to truck buyers: torque.

Fuel-economy numbers also are yet to be verified, but GM expects the new Duramax to be best-in-class. The 2.5L gasoline 4-cyl. in the new Colorado/Canyon is rated at 20/27 mpg (11.7-8.7 L/100 km) with 2-wheel drive and an automatic transmission.

The filler neck is adjacent to the gasoline port on the driver’s side of the truck, but the fluid will need topping off every 7,500 miles (12,070 km), aligning with routine intervals for oil changes.

From the beginning this compact Duramax, a bored-out version of the 2.5L also built in Thailand, was designed for truck durability, so the cast-iron block, aluminum cylinder head, pistons, connecting rods and crankshaft carry over unchanged, Scott Yackley, assistant chief engineer-Duramax, tells journalists during a briefing about the engine at the GM proving grounds here.

“We have a lot of confidence in this engine,” Yackley says. “It’s been in the field for a number of years now. It’s very robust from a durability standpoint.”

Ceramic glowplugs will help prep the engine for starting in extreme cold climates, and a block heater is optional.

The longitudinally oriented 2.8L will be paired with the same 6-speed automatic transmission mated to the V-6, but the diesel gets the new centrifugal pendulum absorber, designed to ensure smooth operation during all load conditions.

“A 4-cyl. diesel comes with a lot of torque fluctuations,” Yackley says. “If you send those through the driveline, you get vehicle shake and significant vibration.”

He says the CPA, integrated within the LuK-supplied torque converter, allowed engineers to optimize the truck both for ride quality and fuel economy.

The engine uses an oil-filter cartridge because it has higher capacity than a conventional screw-on filter.

On the sound-damping front, a unique acoustic pad on both sides of the firewall helps keep engine clatter out of the passenger compartment, Yackley says. The engine has one balance shaft.

Like the 6.6L Duramax V-8 in GM’s heavy-duty trucks, the new 2.8L comes standard with an exhaust brake for better trailer control, especially on downhill grades.

With the function on, when the vehicle senses a steep grade, the turbocharger vanes will start to close, creating backpressure on the engine. “Basically, you get a negative torque at the wheels,” Yackley says.

Also unique with the 2.8L is a new charge-air cooler and an electro-viscous cooling fan that is mounted to the engine, accessory-driven and will shut off when not needed.