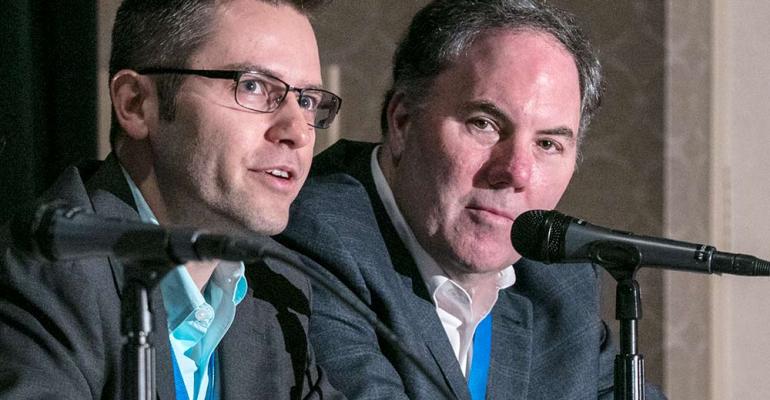 &ldquo;If I smash my $1,000 (Apple) iPhone X in the parking lot and can&rsquo;t drive my car, that&rsquo;s a big problem,&rdquo; says Jacek Spiewla of Mitsubishi Electric. &ldquo;I can&rsquo;t get in my car because the smartphone acts as a key, and I can&rsquo;t use my interface because&hellip; now it&rsquo;s smashed to bits.&rdquo;

NOVI, MI – Consumers, it seems, can’t live without their smartphones, and American roads are filled with people endangering lives by talking and texting on their devices while driving. A texting driver is 23 times more likely to have an accident.

So the question begs to be asked: At what point will vehicles no longer need the user interface of touchscreens, gauges and buttons because functions such as navigation, entertainment, communication and much more can be controlled with a phone?

In the most extreme scenario, an entire supply chain built around components for in-dash systems could disappear after being core to the automotive experience for generations.

“I think it will be quite a clash with the technologies for sure,” Michael Godwin, director of visible LED products at Osram Opto Semiconductor, one of the industry’s largest suppliers of

The popularity of ride-hailing services such as Uber suggests the user experience might become less important to consumers over time, Godwin says. “If you can’t afford a car but have to Uber around, do you need to have UX in the car or is it just transportation?” he asks.

Jacek Spiewla, user experience manager for Mitsubishi Electric, raises a practical concern about next-generation smartphones that might be empowered as high-tech keys for vehicles.

“If I smash my $1,000 (Apple) iPhone X in the parking lot and can’t drive my car, that’s a big problem,” Spiewla says. “I can’t get in my car because the smartphone acts as a key, and I can’t use my interface because… now it’s smashed to bits. That is why I think a redundant interface will always need to be there in the vehicle.”

Besides, smartphones are not designed to last as long as cars or built to automotive standards, he says. “Relying on that device as our end-all-be-all user experience, I don’t think, is very wise, personally.”

Robert Kinney, vice president-North American engineering for interiors supplier Faurecia, says his company displayed 10 years ago at the Los Angeles auto show a concept allowing a driver’s personal hand-held device to provide navigation functionality without having to pay $2,000 for an in-dash system – a cost-effective solution for emerging markets much like today’s Apple CarPlay and Android Auto.

“We found those things to be very compelling use cases,” Kinney says. “That started a dialogue with our customer base that has evolved to today,” focused on value and the ability to update devices and making the most of data generated by them.

“As data from all these sources becomes more and more useful and we find better ways to operate with it, where do the boundaries really lie?” he says. “Figuring out how to get the live update functionality but still build in enough forward thinking technical capability so it won’t become obsolete before the useful life of the vehicle is probably one of the biggest challenges we face today.”

Godwin, Spiewla and Kinney spoke on a panel session dedicated to new concepts for enhancing the automotive user experience.

These experts can’t predict the dominant automotive user interface of the future, but they all have their visions.

At Mitsubishi Electric, Spiewla says touchscreens “no longer hold that wow factor,” because some of them are complicated, requiring drivers to cycle through multiple menu pages to perform seemingly simple functions. That means drivers are spending more time looking at the screen rather than at the road ahead.

Mitsubishi Electric advances the concept of “hybrid haptics,” which embed display screens with a physical rotary knob that can switch easily between various functions, such as adjusting fan speed, cabin temperature or audio volume.

In the personal-computer market, Spiewla says fewer than 5% of users change their default settings, meaning 95% of people don’t bother to change computer settings that are designed for customization. Hybrid haptics could be a solution, he says.

“Here as designers we need to figure those out” and allow consumers to reconfigure their vehicle controls more easily, Spiewla says. “We need to let the system learn from my behavior.”
Years ago, the “cockpit” was an instrument-panel module housing gauge clusters and climate and radio controls. “Now the cockpit means an entire ecosystem inside the vehicle – and really outside the vehicle – and information we want to interact with as users,” Kinney says.

But functionality must be delivered in a highly styled package, he says.

“We’re seeing the fusion of electronics and decoration coming together,” Kinney says. “We think this is a very important aspect for us to consider. We hear from our customers and the industrial design community: If it’s not beautiful, it doesn’t sell, either. If only a mother can love it, it doesn’t move, right?”

In the future, he sees fully digital gauge clusters and one smart display “surface” with compelling graphics and an interface that is simple and intuitive. Kinney refers to the Alfa Romeo Giulia, which won a Wards 10 Best Interiors trophy partially for its vivid and stylish display screen (supplied by Faurecia) that blends neatly into the instrument panel.

“I see a significant display panel with center-stack functions and the ability to morph it into a driverless mode over time, where the steering wheel has found a way to integrate itself inside the IP,” he says. “When we marry all these things together, we think we will end up with a pretty compelling new experience for our customers and us as end users as well.”