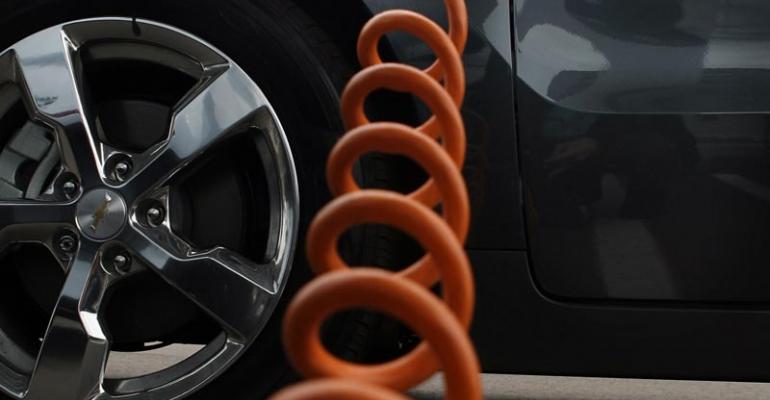 Chu also says the DOE&rsquo;s controversial Advanced Technology Vehicles Manufacturing Program remains intact, although the government has not successfully awarded any funding since 2008.

WASHINGTON – U.S. Department of Energy Secretary Stephen Chu says the Obama Admin. continues to believe it will reach its goal of putting 1 million electrified vehicles on the nation’s roads by 2016, despite another year of dismal sales for the cars.

“It’s ambitious, but let’s see what happens,” Chu tells reporters on the sidelines of the Washington Auto Show.

Auto makers last year delivered a combined 482,575 battery-electric, plug-in hybrid and hybrid vehicles, accounting for 3.3% of the new-vehicle market, according to WardsAuto data. PHEVs drew 0.3% of sales and BEVs captured 0.1%.

But Chu says the White House draws optimism from positive trends that have emerged in the last year, such as increased demand for the Chevrolet Volt extended-range EV. Volt deliveries tripled to 23,461 units in 2012 from 7,671 in 2011.

Chu also sees as a positive sign Nissan’s decision earlier this year to drop the price of its ’13 Leaf BEV by $6,400, reducing the sticker to $28,800 from $35,200 in ’12. Nissan attributes the price cut to shifting production of the car to the U.S. from Japan, as well as removing a “shocking” amount of costs from its expensive lithium-ion battery pack.

“The rate of progress on these things is taking off,” Chu says.

The administrator also says the DOE’s controversial Advanced Technology Vehicles Manufacturing Program remains intact, although the government has not successfully awarded any funding from the $25 billion loan program since Ford, Nissan and EV maker Tesla received a combined $8 billion in 2008.

Fisker, which makes an EREV sports car, was awarded $528.7 million in backing, but it failed to meet conditions of the loan and the funding was suspended. Fisker reportedly has turned to Chinese investors for help bringing its second model to market.

Other makers of alternative-propulsion vehicles, such as Bright Automotive and Aptera Motors, folded while waiting for their ATVM funds.

Chu says the DOE continues to support research in a number of areas, including hydrogen fuel cells and compressed natural gas, but the White House wants to take an “all-of-the-above” strategy to reducing oil consumption and not pick winners and losers.

“We’re going to let the products entice people to buy them,” he says. “We’re technology neutral.”

Chu’s remarks come after announcing the "Workplace Charging Challenge," a collaboration between the DOE and U.S. corporations to increase the number of EV charging stations at the workplace.

Workplace charging recently has emerged as a key selling point for PHEVs and EVs. As Chu notes, 40% of Americans either rent or live in an apartment or condominium. That limits their access to charge at night. And most Americans spend as much time at work as they do home, he adds.

The goal is to increase the number of electrified-vehicle owners charging at work by 10 times over the next five years.

“The ability to charge (at work) would be incredibly useful and also provide a market draw,” he says.

According to Chu, companies joining the challenge receive no incentive to participate, other than making their workplaces more attractive because they are listening to their EV-owner employees.

“It comes from the employees,” he says. “That is the benefit to the companies.”

The Workplace Charging Challenge is part of Obama’s recently announced “EV Everywhere Challenge” focused on making the U.S. a world leader in EV production and sales.