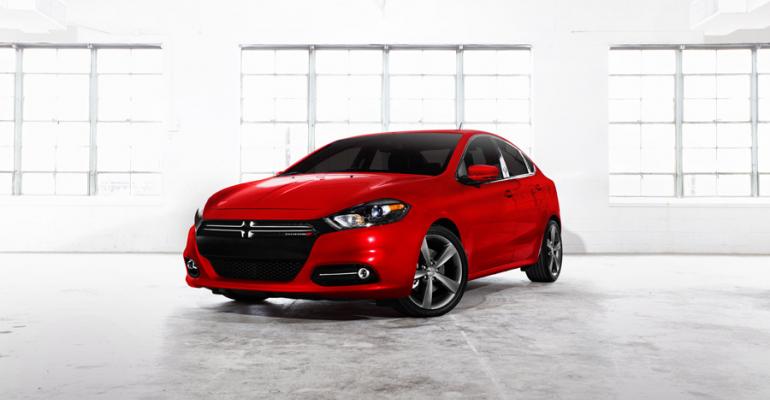 SRT President and CEO Ralph Gilles says the GT will draw more young males to the compact Dart, which translates into sales. &ldquo;Whatever you call it, it&rsquo;s a great car. It&rsquo;s not an SRT, but it&rsquo;ll do for me.&rdquo;

DETROIT – Chrysler executives insist the new Dart GT model won’t disappoint customers who have been waiting patiently for an R/T badged version of the car.

A natural progression would have brought an R/T option as well, which is reserved for higher performance and more-aggressive styling. The trim is available on the Charger, Challenger and Journey.

The Dart GT also separates itself with a 6-speed manual transmission and not the 6-speed dual-dry-clutch transmission introduced on the first wave of Darts. The DCT, popular in Europe but largely unknown in the U.S., is intended at bring more Alfa Romeo technology to the Chrysler lineup.

But the DDC take rate has been sluggish as most drivers opt for one of the other transmission choices.

Dodge Brand President and CEO Reid Bigland says the GT’s release coincides with the 50th anniversary of the first Dodge Dart GT unveiled in 1963. “You may see other examples of going back into that history with respect to the current Dart,” he tells WardsAuto in an interview here.

Blacktops, which Bigland says are inspired by aftermarket trends in California, are characterized by blacked-out wheels and grilles, such as those now available on the Dart GT. Napa leather seats once exclusive to Dodge’s R/T vehicles also are offered on the new compact.

“It’s not technically Blacktop,” Bigland says, “but it is kind of a sinister look for the (basic) Dart,” noting the car may have a Blacktop option in the future.

Regarding adding an R/T, “We’ve got a few other things up our sleeve with respect to the R/T that we’ve elected to just defer at this time,” he says. “We’ve (done) enough with the GT to do well on the Dart.”

Chrysler chief designer and SRT President and CEO Ralph Gilles tells WardsAuto the GT will draw more young males to the compact, which translates into sales. “Whatever you call it, it’s a great car. It’s not an SRT, but it’ll do for me.”

Gilles says Dodge is wise to reserve the R/T badging “for something more aggressive, more special.” He says the GT holds a place between the Rallye trim and a “potential R/T in the future. The R/T Charger and R/T Challenger have set the bar pretty high. It’s just trying to go back to where that name really means something.”

Chrysler sold 25,103 Darts in 2012, according to WardsAuto data. The Dart GT version arrives at dealers in March. “It’s never enough,” Bigland says about Dart sales. “(But) I think we are fairly well-positioned when it comes to the Dart.”

The average transaction price for a Dart is about $22,000, which Bigland says is $1,800 higher than most compact cars. “We’ve got very low incentives. There’s certainly room to move on the incentive front, but Chrysler has no plans to aggressively chase volume and market share with aggressive incentivizing.

“(The R/T version) is going to come, and (the Dart) will continue to improve,” he says. ‘We’re not going to pursue (a high-performance model by) disrupting the apple cart.”