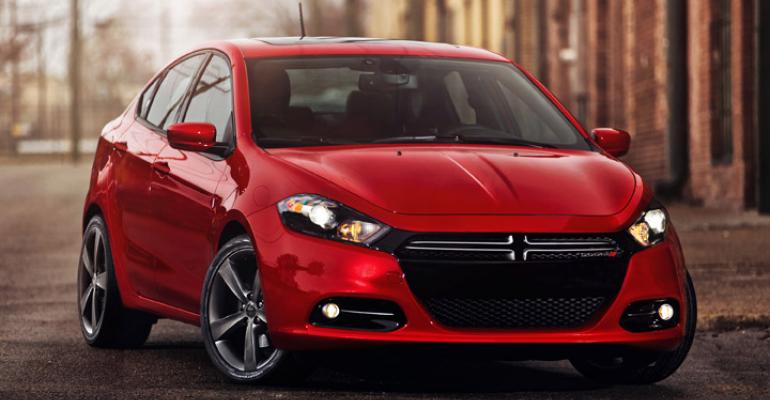 Chrysler brings back the Dart as a &rsquo;13 model, and it seems as though designers performed tricks in creating such an impressive interior.

The last original-version Dodge Dart was built in 1981 in Brazil – U.S. production had stopped in 1976 after a 16-year run – and that final model off the line ended up doing duty as a circus trick car before someone rescued and restored it.

Chrysler now is reviving the Dart as a ’13 model, and it seems as if designers performed tricks in creating an impressive interior for this entry-level compact. It replaces the Dodge Caliber, an inferior car finally put out of its misery.

Talk about a worthy successor. The ’13 Dart starts at $15,995, yet its interior is stunningly upscale. With assorted options, our test vehicle was $21,485.

Highlights include precise craftsmanship of quality materials, tasteful bursts of colors on the instrument panel and elsewhere, an optional heated steering wheel, ambient lighting and sculpted shapes, such as an artistic figure-8 cupholder design between the lush front seats.

An abundance of features in a low-price car is why the Dart is a Ward’s 10 Best Interiors winner.

On their score sheets, judges lauded the Dart’s high-tech, well-crafted and eye-pleasing interior.

“It is almost Audi-like,” says editor Drew Winter, referring to the German luxury division that arguably is the benchmark for fine interiors.

The Audi A7 justifiably made this year’s Ward’s 10 Best Interiors list, too, but it is worth noting that vehicle is priced $45,945 higher than the Dart.

“It is a beautiful interior,” editor Byron Pope says of the Dart. “For a car in this class, it is among the best.”

The Dart is a “nice blend of controlled coolness,” says another editor. “There is a lot to like.”

On the safety side, that includes 10 airbags. The Dart also is the only car in its class to offer blind-spot monitoring and rear cross-path detection.