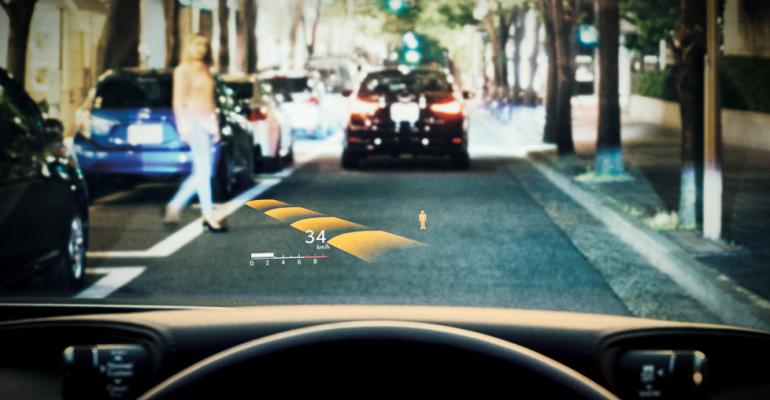 The human-machine interface has a nearly 24-in. projection and&nbsp;will be featured on the new &rsquo;18 Lexus LS sedan, Denso says.

Denso announces it has developed a thin-film transistor enabling it to produce what it says is the world’s largest automotive head-up display, a human-machine interface with a nearly 24-in. (61-cm) projection.

The liquid-crystal display will be released in November and featured on the new ’18 Lexus LS sedan, the supplier of automotive technology, systems and components says in a news release.

The new device projects a virtual screen about 118 ins. (300 cm) ahead of the driver, enabling the driver to more intuitively receive key information about the vehicle and its surroundings without changing direction of gaze, Denso says. The technology displays not only basic information, such as speed limits and the vehicle’s speed, but also the locations of pedestrians through external sensors.

The HUD also provides lane-guidance assistance by using a navigation system featuring an arrow indicating the appropriate lane to follow at junctions and intersections, the supplier says.

The technology adjusts to the relative position of the information displayed, its colors and other visual effects without obstructing driving. Its display is brighter than those of conventional HUDs to ensure screen visibility in bright conditions.

Denso has produced HUDs since 1991.