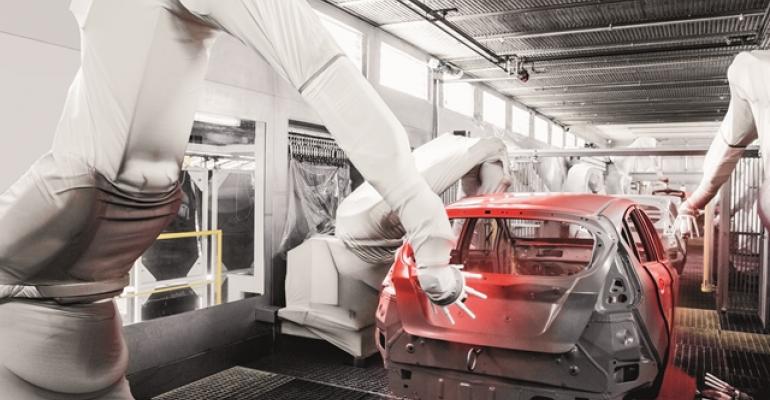 The German supplier strategically positions its technical and testing facility near Detroit to train automaker customers to get the most out of their investments.

SOUTHFIELD, MI – Dürr, a German supplier whose equipment has painted 75% of vehicles on U.S. roads, steps up its North American presence with a $43 million technical and testing facility here that consolidates three operations from nearby Wixom, Plymouth and Auburn Hills.

An automotive paint shop is enormously expensive – up to $453 million (€400 million) with new brick-and-mortar or $181 million (€160 million) without – so Dürr strategically positions its tech center near Detroit to train automaker customers to get the most out of their investments.

“The planning, engineering, manufacturing, installation and commissioning up to production numbers, we can do it in North America with the team we have here,” Bruno Welsch, CEO and president of Dürr Systems, tells journalists as the building is dedicated.

The new facility is equipped with a fully functioning robotic spray booth, oven, industrial cleaning machines, conveyors and equipment for application of adhesives and seals.

The validation process involves pre-assembling and pre-commissioning the robots and ends with shipment of the complete paint system to the customer’s facility for trial runs. “For us and the customer, it’s the most efficient method to get a plant up and running in a short time,” Welsch says.

An automaker can schedule a costly 6-week shutdown at its plant to convert a paint shop, but the validation work needs to be done ahead of time to ensure smooth rampup once the shutdown is complete, he says.

Welsch expects customers will come to the new facility here to prove out paint processes, experiment with more efficient methods and test new materials, equipment and software. “If the program requirement is (to paint) 70 cars per hour, how do you do it?”

As the industry is shaving weight off vehicles to boost fuel efficiency, automakers face challenges in the paint shop because new materials may respond differently to the bake oven.

“We are the only company in the country with a test oven that can simulate either conditions in Alaska or in Arizona,” Welsch says.

Dürr purchased the land in Southfield near Lahser Road and US-10 in late 2014 and refurbished the building and site over the next year, occupying the complex beginning in January 2016. With 430 employees, the facility is 85% booked for testing activities with customers, Welsch says. The company has a similar facility in Querétaro, Mexico.

The company has been public since 1989 and has been present in the U.S. since 1970. Since then, Dürr has installed 25 turn-key paint shops in North America. Growth in North America has been steady, from 886 employees in 2005 to 1,300 today.

A milestone for the company came in 2003, when General Motors signed a $1 billion contract with Dürr for three paint shops at plants in Oshawa, ON, Canada; Lordstown, OH; and Lansing Delta Township, MI.

A paint shop will last anywhere from 20 to 30 years, depending on how well it’s maintained and updated along the way, and paint robots, also built by Dürr, can last up to 15 years, Welsch says. Waterborne coatings are growing in popularity, but the company says some automakers, particularly Ford and Japanese OEMs, are sticking with solvent-based paint.

Most recent growth in the U.S. auto industry has been in the South, where transplant automakers have set up manufacturing plants with new paint shops.

That explains why Dürr selected Michigan for its U.S. operation, to be closer to older facilities in the North that eventually will need new paint shops or significant renovation, says Ralf Dieter, CEO of Dürr Group.

“There’s a lot of old equipment in the U.S.,” Dieter says. “When it’s time to replace equipment that is old, then (the customers) will need training, new controls, new software and they’ll have to know how to run it.”

Dieter is not concerned about the prospects of North American vehicle production reaching a plateau. Light-vehicle output across North America is on pace to reach 17.7 million vehicles this year, up from 17.4 million in 2015, according to WardsAuto forecasts.

“Refurbishing of existing plants goes on,” Dieter says. “Also, cars are moving from plant to plant, and that requires us to do service work.”

He refers as an example to the European market, which has been sluggish, but automakers there continue investing in paint-shop upgrades in anticipation of rebounding sales.