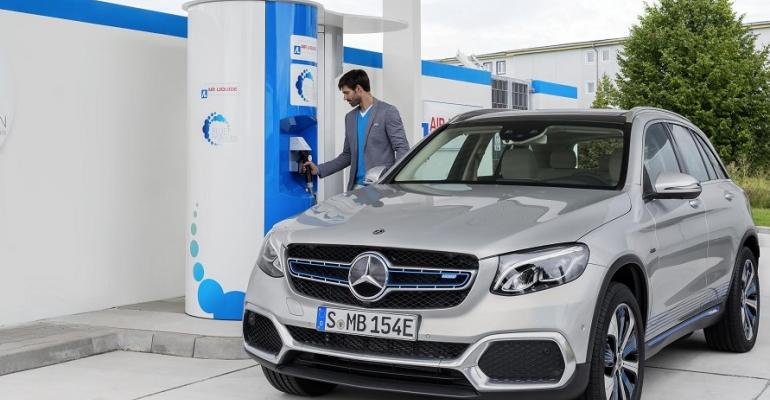 Pierre-Etienne Franc, co-secretary of the Hydrogen Council, acknowledges it will be an uphill challenge to establish a hydrogen fueling infrastructure, in part because of significant upfront costs.

TOKYO – It is a slog, no doubt, but several industrial and industrializing nations are putting in place a fueling infrastructure for fuel-cell vehicles.

“The infrastructure issue is progressively being solved,” Pierre-Etienne Franc, co-secretary of the Hydrogen Council, tells Wards in an interview. “But we also need more cars on the road.”

Franc, more bullish than most, thinks a global network of 10,000 stations is reachable by 2030. A more conservative forecast was presented at the International Hydrogen and Fuel Cell Expo in March by Fuji Keizai, a leading Japanese market-research organization, which predicted a total of 5,500 stations in the same timeframe, still a substantial increase over an estimated 290 today.

Germany’s total has grown to 74 with an additional 28 in various stages of planning or construction. Throughout the rest of Europe, 31 stations are operational with an additional 21 scheduled to come on stream, bringing the region’s current total to 105.

Backed by H2 Mobility Germany, a joint venture comprising leading European energy companies and Daimler, Germany has set a target of 400 stations by the end of 2023 and 900 by 2030.

In the U.S., California, the long-time leader, continues to advance a statewide program with 40 stations now open for business and another 24 in the works. By the end of 2020, the state plans to have 64 stations in operation.

Fuji Keizai estimates the U.S. will have 250 hydrogen stations operating by 2025, half in California.

Elsewhere, South Korea had 14 stations in operation in 2018 with plans to open a total of 100 by 2022. China, the newest major market entry, is racing full-speed forward with a series of national and regional initiatives. China earlier this year had 15 operating stations with another 33 in planning.

Franc, who when not serving the 60-member Hydrogen Council is vice president of the hydrogen business unit at Air Liquide, acknowledges it will be an uphill challenge to establish a hydrogen fueling infrastructure, in part because of significant upfront costs.

While costs differ by country, region and station size, Franc reports the current cost to construct a hydrogen fueling station is between $1 million and $2 million. In Japan, that number is believed to be upwards of ¥250 million ($2.4 million) and probably closer to ¥319 million ($3 million) based on the government’s roadmap.

This compares to an estimated $200,000 for an ultra-fast-charging electric-vehicle station equipped with a single 350-kW charger.

The International Council on Clean Transportation says installation costs (separate from hardware costs) come down as more chargers are installed at a particular site.

In Europe, Ionity, a JV between BMW, Daimler, Ford and Volkswagen, has set a 2020 target of 400 ultra-fast-charging EV stations and approximately 2,400 chargers, each able to operate at 350-kW levels.

“Compared to fast-charging stations for battery-electric cars, hydrogen stations are more expensive but also have far greater capacity,” Franc says, adding that a hydrogen station “can refuel between 100 and 300 cars per day, (as) it takes only three to five minutes to refuel per car.

“With batteries, the charging operation grows in a linear manner as the number of cars increases. The initial investment will be small, but as volumes and momentum grow, so does the investment,” he says.

“I am unaware of anyone who’s said that fast-charging stations can be profitable even when fully utilized, but I may be wrong.”

Franc, who speaks on behalf of the Hydrogen Council, nevertheless concedes hydrogen and electric must complement each other to reduce carbon-dioxide emissions.