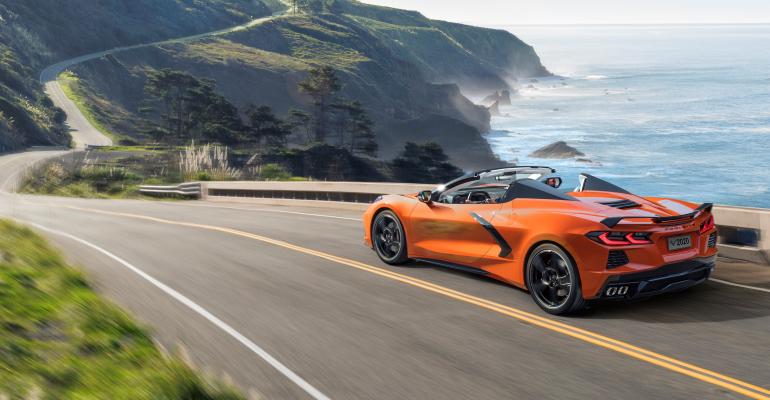 GM says the convertible Stingray will cost $7,000 more than the coupe, which shocked enthusiasts when its base price of less than $60,000 was announced at its historic unveiling in July.

GM says the convertible Stingray will cost $7,000 more than the coupe, which shocked enthusiasts when its base price of less than $60,000 was announced at its unveiling in July. Convertibles comprised 16.9% of Corvette sales last year, according to Wards Intelligence.

The Corvette Stingray convertible will be available to U.S. customers in first-quarter 2020, with a right-hand-drive version going to international customers later. The coupe enters production at GM’s Bowling Green, KY, assembly plant at the end of this year.

Josh Holder, Corvette program engineering manager, notes the very first Corvette was available as a convertible only, making the droptop part of the car’s DNA from the beginning.

“Open-air driving has been a hallmark of the Corvette,” Holder says during the convertible introduction here.”

The convertible employs a retractable hardtop, unlike soft-top Corvettes of previous generations, for a quieter cabin, greater security and a cleaner look. The 2-piece top stows in the rear cargo area without sacrificing storage space. GM says two sets of golf clubs still will fit in the rear cargo compartment, as they would in the coupe, and the smaller front storage area remains.

Holder says the hardtop convertible was developed alongside the coupe to ensure owners did not have to sacrifice functionality, performance or comfort. The design theme was kept the same, he adds, along with the track capability of the coupe.

“We expect similar, outstanding performance numbers,” Holder says, returning to the fact the cars were developed alongside each other, so the dramatic revisions usually performed between coupe and convertible models of a car was not necessary.

“We went in prepared to use the whole toolbox and we didn’t need to,” he says.

The convertible is 77 lbs. (35 kg) heavier than its brother, but Holder says slight tweaks to the chassis, specifically spring and dampers, retain the coupe’s driving dynamics. 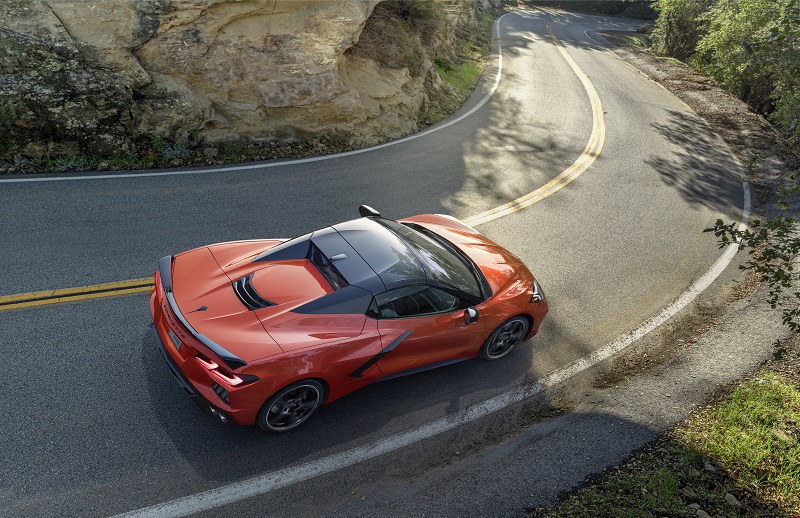 The top retracts in about 16 seconds and is powered by six electric motors. It uses encoders, which digitally control motion parameters, to ensure precision, GM says. Electric motors also are more reliable than the hydraulic systems previously employed by Corvette convertibles. The top can be activated at speeds up to 30 mph (48 km/h).

The convertible is unveiled at the Kennedy Space Center to underscore Corvette’s fighter-jet-inspired design heritage and its long connection to aerospace. The redesigned, eighth-generation coupe’s reveal was held inside a former airship hanger in California and featured appearances by a pair of astronauts, who since the inception of the space program have gravitated to the Corvette. Former astronauts spoke of their enthusiasm for the Corvette at the space center, as well, and it connection to flight.

For example, the tonneau cover on the new convertible includes aerodynamically shaped nacelles influenced by the housing used for jet engines. The nacelles also were used as inspiration on the Chevrolet Engineering Research Vehicle (CERV) I and II, as well as the Corvette SS and SR2 concepts.

GM says the nacelles help reduce air recirculation into the cabin and provide an exotic profile with the top up or down. The tonneau also permits a rear, power-adjustable window and a vent for mid-engine cooling. The Carbon Flash metallic-painted nacelles and top are optional equipment. A body-color roof is standard.

GM says attention was paid to ensure the engine could breath to stay cool when stored under the tonneau cover. The sheet-molded, composite top stows in a compartment made from lightweight composite panels and heat shields to manage heat from the engine, the automaker says.

A divider glass window in the middle of the car can be powered up or down. The glass was optimized to reduce air recirculation and wind noise in the cabin for improved quietness when the top is down, GM says. The roof system design, which combines with the same rear spoiler used on the coupe’s Z51 Performance Package, keeps aerodynamic drag on par with the coupe when convertible top is closed.

As with the coupe, the convertible leverages GM’s 6.2L gasoline direct injection LT2 V-8. The small-block makes 495 hp and 470 lb.-ft. (637 Nm) of torque when equipped the performance exhaust option. The engine mates to an 8-speed dual-clutch automatic transmission. 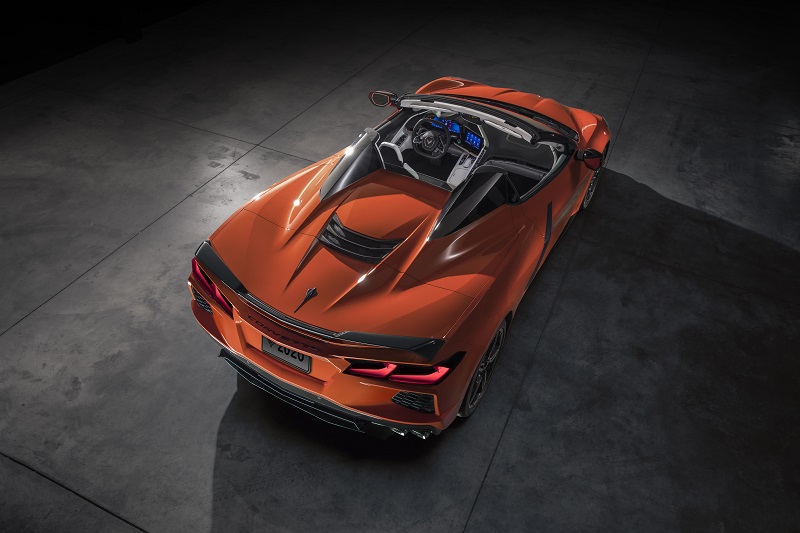 Corvette hardtop retracts in 16 seconds, at speeds up to 30 mph.