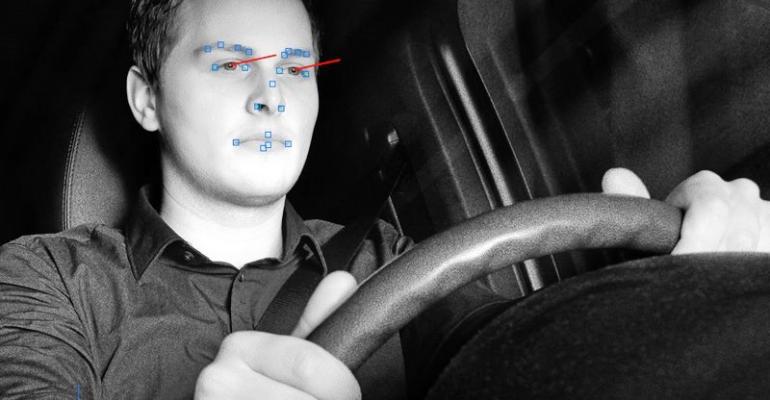 Technology that can look into drivers&rsquo; eyes and read their mind (well, almost), dazzling audio systems that don&rsquo;t use speakers and wireless inductive charging systems for battery-electric vehicles are just a few examples of the deluge coming from the auto supplier.

The cars will be the stars at next week’s Frankfurt Motor Show, but some of the most interesting and talked-about new features will be coming from suppliers, including technology that can look into drivers’ eyes and read their mind (well, almost), to dazzling audio systems that don’t use speakers and wireless inductive charging systems for battery-electric vehicles.

Earlier this year Continental, one of the world’s largest and most diversified auto suppliers, gave journalists a preview of the multitude of products it will introduce at Frankfurt.

It was like trying to drink from the proverbial fire hose.

In addition to the above, offerings range from automated driving and new powertrain technologies to simple but important devices such as a new camera with an integrated high-performance nozzle that spritzes the lens clean when it gets covered with mud or snow, much like headlamp washers. Clean lenses are crucial for rear backup cameras and vital to the future of autonomous driving.

Some of these technologies are destined for 2020 and beyond, but many will be going into production this year or next. Here is a sample of the significant things Continental will premiere at Frankfurt:

Going into production this year, the Driver Analyzer uses digital face-recognition and eye-gaze direction data from an interior camera to determine what the driver is planning to do next. It detects where the driver is looking, blink rate, tiredness and other factors.

Continental says the Driver Analyzer will play a key role in semiautonomous vehicles deciding how long a disengaged driver will need to re-assume the task of driving. The electronics can estimate the expected transition time and allow for better planning of the transition procedure during highly or fully automated driving.

We were able to experience the Driver Analyzer on a brief test drive at Continental’s proving grounds near Hanover last June and found the camera amazingly perceptive. It had no trouble tracking our pupils through dark sunglasses and whenever our gaze wandered from the road it reminded us to “please concentrate,” (an annoying feature Continental engineers say won’t find its way into production). Perhaps the most impressive feature is it can tell the difference between inattention and merely taking eyes off the road to look at rear- and side-view mirrors. Obviously it couldn’t read our mind, but sometimes it seemed like it was.

We expect luxury vehicles to have great audio systems, but Continental will unveil a vehicle with powerful, concert-quality sound without conventional speakers. Instead, tiny actuators that are similar to the core of a conventional speaker are used to excite materials in the vehicle interior to generate high-end audio that emanates throughout the cabin.

The speaker-free technology has the potential to reduce weight 33 lbs. (15 kg) and considerable space compared with today’s premium audio systems using 10 to 20 speakers. It provided stunningly good sound quality during a brief ride around Continental’s test track. The technology is similar in concept to the speakerless audio system in the Honda Ridgeline pickup bed, but this system delivers audiophile-level sound.

The invisible car-audio technology can be integrated into any car model from high-end luxury cars to small electric vehicles, Continental says. It also is scalable to provide several levels of sound quality, from entry level with three channels all the way up to matching super-premium systems with 12 channels and 20 tweeters, woofers and midrange speakers.

Instead of speakers, specific areas in the vehicle lend themselves to each of the required three main frequency ranges.

“The A-pillar is suited for high frequencies, while the door panels, for instance, have the right properties for generating medium frequencies. Similar to speaker technology, we use large components such as the roof lining or rear shelf to generate low frequencies,” says Dimitrios Patsouras, director-Competence Center NVH at Continental Engineering Services.

The system is expected to go into production around 2020.

Wireless charging for BEVs seems like far-off technology, but it will be in production before the end of the decade. BMW is expected to put an inductive-charging system into production next year, followed by Mercedes-Benz. Audi’s upcoming e-tron Quattro, which goes into production in 2019, will offer inductive charging capability. Other Volkswagen-branded EVs are expected to follow not long after.

Continental will debut an inductive-charging system at Frankfurt that allows BEVs to easily be charged with up to 11 kW capacities. The driver is guided to the charging point with high precision through a special human-machine interface app.

Convenient inductive charging involves not only the charging and safety electronics, but also a system for providing the driver with the appropriate information, Continental says.

The charging power is transferred wirelessly from a ground-based charging pad to a receiver pad on the underside of the vehicle. All the driver has to do is to park over the charging pad, assisted by what Continental calls a micro-navigation solution.

As soon as the vehicle approaches a parking spot equipped with inductive charging, an authentication dialog with the charging station is executed automatically. The HMI app then shows the driver when the vehicle has reached the correct parking position and confirms when charging has started.

The supplier also will showcase its new AllCharge charging system installed in a demo vehicle.

It accommodates a variety of charging systems by transforming the EV powertrain into a “universal charger” for wired charging at stations with varied equipment and voltages. The driver can drive to any type of charging station and recharge their vehicle battery without having to worry about which kind of chargers are in place.

With the AllCharge system, it will be possible to “fill up” vehicles to the maximum capacity of up to 800 volts and up to 350 kW in the future. This bidirectional system also opens up new possibilities for the large amount of energy stored in the vehicle battery to be sent back to the grid when necessary.

EVs present additional challenges besides range and charging issues. For instance, regenerative brakes on EVs can slow down vehicles so well the conventional foundation brakes are barely used.

The problem with this is the cast-iron brake disks can corrode and hurt full braking power in the event of an emergency. With its new wheel concept, Continental showcases a new approach that has been specially developed for the brake usage behavior in EVs. Material selection and the design of the new wheel prevent this corrosion and guarantee permanent full brake availability, despite infrequent activation.

We’ve been hearing about the potential benefits of 48V mild-hybrid powertrains for years but in Frankfurt Continental will be showing off the first volume production car featuring 48V powertrain technology: the Renault Scenic Hybrid Assist.

The system combines a water-cooled induction motor with an integrated inverter. The electric motor transmits power via a belt drive that connects directly to the crankshaft of the combustion engine. Continental says the technology achieves proven fuel savings of 21% in real-life urban traffic. With the production vehicle, both the fuel-saving hybrid-electric driving functions as well as the gain in convenience of a 48V mild hybrid will be made tangible the company says. It predicts 4 million vehicles with 48V drives will be produced worldwide by 2020 and as many as 25 million by 2030.

Mild hybrid tech can also be used to create super-clean diesel powertrains, Continental says. At Frankfurt it will tout a diesel concept with 60% less oxides of nitrogen compared with the Euro 6 standard and 2% less carbon dioxide emissions.

“The diesel engine will continue to play an important role in meeting mobility needs for the foreseeable future. It is vital for us to develop the technology to support extremely low-pollutant diesel operation,” says Jose Avila, president of Continental’s Powertrain Div. 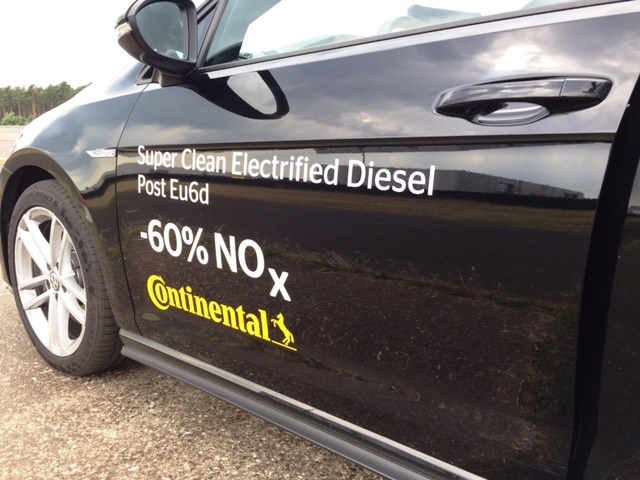 Among the diesel-supporting technologies on the concept are a piezo common-rail injection system that provides injection pressures as high as 36,000 psi (2,500 bar) for precisely metered injections per combustion cycle and a close-coupled electrically-heated catalyst that substantially reduces oxides of nitrogen in HEVs by keeping the selective catalytic reduction system at optimum temperatures even when the engine turns off and the car is in EV mode.

Regular over-the-air updates that deliver new functions and security upgrades are something we already are familiar with from smartphones and high-end automotive brands such as Tesla.

In vehicles, software updates beamed down from above instead of downloaded at a local dealership will become increasingly desirable and necessary. Continental will explain how these updates can be performed securely and reliably, especially with the help of direct satellite connections.

But not all connectivity features have to be space-age and futuristic. With voicR, Continental brings the delightfully retro idea of CB radio technology, popular with truckers for decades, into the digital era. With a Bluetooth hands-free function and integration in the fleet management system from the Continental company Zonar, voicR uses elements of the “Internet of Everything” to provide secure, spontaneous and rapid communication between truckers and fleet managers.

Continental’s Cruising Chauffeur is designed to show what a journey in a highly automated vehicle might potentially look like, including the technologically critical handover phase between the vehicle and driver.

Comparable to Cadillac’s Super Cruise and Tesla’s Autopilot, the system will temporarily take over driving duties on highway and secondary roads as well as in stop-and-go traffic. There also is an increasing degree of automation at lower speeds when it comes to parking.

We were able to take Cruising Chauffeur on a brief test drive at Continental’s proving grounds and found it impressive, including a feature that has the car automatically slow down and pull to the side of the road if it senses the driver is debilitated and unable to take over driving duties when necessary.

Continental believes there is a future role for artificial intelligence in sensor technology: Namely, to deduce potentially critical traffic situations on the basis of object detection. To this end, it will showcase a new generation of cameras which feature a neural network responsible for object detection.

But before artificial intelligence, and human intelligence, can make key decisions, they have to be able see and detect what’s going on. So last of all, but certainly not least, Continental is presenting a new camera featuring an integrated high-performance nozzle for cleaning dirty camera lenses for the first time ever in Europe. This will allow high-resolution cameras to provide even more effective future support for drivers and advanced driver-assistance systems.