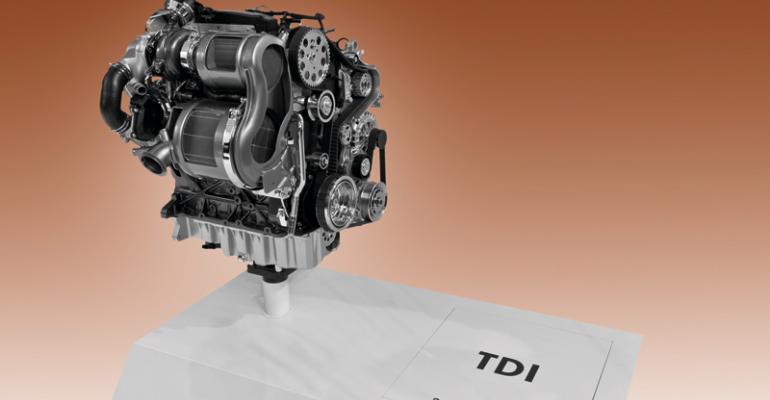 The more the merrier when it comes to U.S. vehicles with diesel engines, says a top Volkswagen official. However, marketing chief Rainer Michel is confident VW diesels are the top performers.

CHICAGO – It has had the segment virtually to itself in the U.S., but this year Volkswagen sees some competition in the form of diesel cars from Chevrolet and Mazda.

However, the upcoming Chevy Cruze and Mazda6 diesels aren’t keeping VW’s Rainer Michel up at night. Rather, he welcomes the awareness greater availability of the technology in the U.S. will bring.

“I feel happy that now others are sort of joining the club (because) I believe there’s customers out there who don’t even know that you can have a diesel in a passenger car,” Michel, vice president-product marketing and strategy, Volkswagen of America, tells WardsAuto in an interview here.

“Diesel awareness in the (U.S.) is very low and, as a small (volume) company, Volkswagen alone will not turn that around.”

While oil-burners make up just 1% of all light vehicles sold in the U.S., one of every five VW models sold here is fitted with a diesel engine, making the German brand by far the largest non-luxury seller of diesel vehicles in the American market.

Buyers today can opt for diesel power in most VW models, including Beetle, Golf, Jetta and Passat cars, as well as the Touareg cross/utility vehicle. The technology is coming to the Tiguan CUV and CC near-luxury car, Michel notes.

“I can promise you every new Volkswagen in the future will have a diesel,” he says. “When we replace cars like the Tiguan and CC we are fully committed to diesel.”

While he welcomes the increased awareness of the technology new competitors will bring, Michel is confident VW’s diesels will stand out from the pack.

“When it comes to the real challenges of a diesel engine –knock, noise, vibrations and also launch performance – Volkswagen is superior,” he says. “I’m 100% sure.”

The auto maker offers two turbodiesel mills for U.S. models, a 140-hp 2.0L 4-cyl. for cars and a 240-hp 3.0L V-6 fitted in the 5-passenger Touareg CUV. Michel is mum on when a new generation of VW’s stalwart 2.0L turbodiesel will arrive.

In the new, seventh-generation Golf, on sale in Europe since last fall, a tweaked, 146-hp version of the 2.0L is available, but VWA spokesman Mark Gillies says a timeline for the introduction of that engine to the U.S. hasn’t been set.

The new-generation Golf debuts in the U.S. next year. The car will be sourced from VW’s Puebla, Mexico, plant, not Europe, which is the reason for its late debut here, Michel says.

“At the moment there is no plan, but that certainly is an option for the future,” he says, adding the upcoming 168-hp 1.8L turbocharged 4-cyl. for the Beetle, Jetta and Passat, has top priority.

He is lukewarm toward introducing subcompacts to the U.S. despite their fuel efficiency, saying VW research shows American car buyers favor vehicles no smaller than the C-segment Beetle, Golf and Jetta.

“You could argue how successful (U.S. subcompacts are) at the moment,” Michel says when it is mentioned many competitors offer a B-car.

While Nissan has sold its Versa in quantities near or above 100,000 units annually, other auto makers’ subcompacts typically fall short of 50,000 deliveries. However, with VW’s upcoming flexible MQB platform, he says the auto maker can react quickly if a B-car is needed for the U.S.