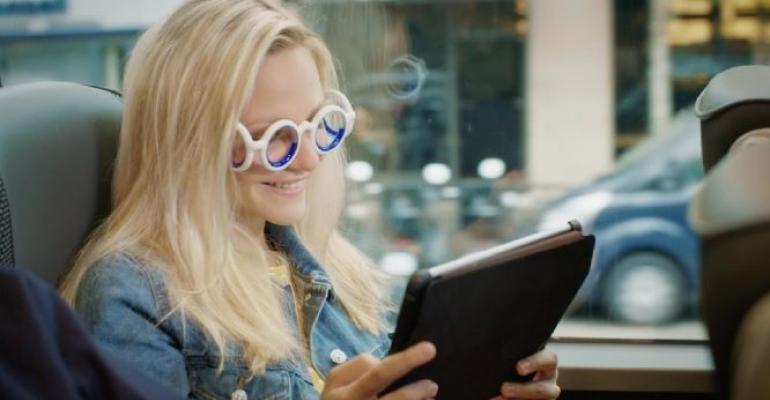 The Seetroën glasses contain a colored liquid that simulates the line of a horizon to resolve conflict between the senses that can cause kinetosis, commonly referred to as chronic travel sickness.

In a digital world of high technology, simple tubes of colored fluids could solve one of the most common issues facing passengers on long car journeys: motion sickness.

French automaker Citroën is marketing pairs of glasses it claims will eradicate a problem suffered by more than 30 million people in Europe. The Seetroën glasses contain a colored liquid that simulates the line of a horizon to resolve conflict between the senses that can cause kinetosis, commonly referred to as chronic travel sickness.

Developed by Boarding Ring, a start-up company based in Var in southern France, the technology is a patented and tested paramedical solution that it claims has an effectiveness rating of 95%.

The rings that surround the eyes both along the frontal axis (right/left) and sagittal axis (front/back), feature a colored moving liquid. Initially developed for sailors, Citroën has adapted the technology so that it can be used on any means of transport.

Consumers are recommended to don the glasses as soon as initial symptoms of motion sickness are experienced. Then, after 10 to 12 minutes, the glasses should allow the mind to resynchronize with the movement perceived by the inner ear while the eyes are focused on an immobile object such as a smartphone or a book. The glasses then can be removed for the remainder of the journey.

Seetroën glasses can be used only by adults and children aged over 10 because only after this stage will the inner ear have finished growing. There are no lenses in the glasses, so they can be shared with traveling companions. They can be worn over prescription glasses.