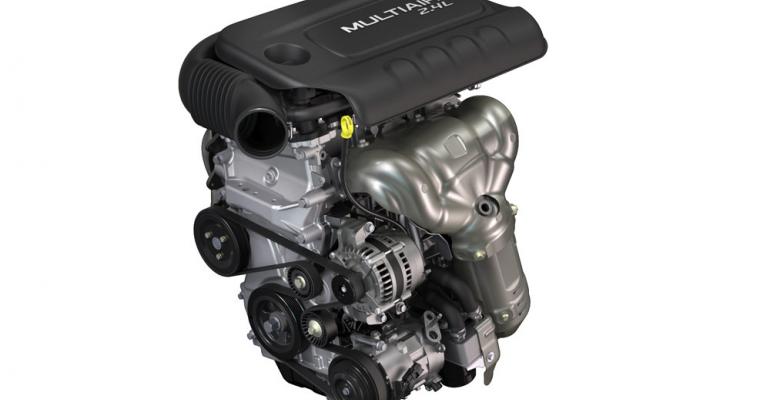 The latest co-developed powerplant between Fiat and the American auto maker, a 2.4L 4-cyl., will be used in the Dodge Dart GT and Jeep Cherokee.

It’s casually known as the MultiAir II, the second in this innovative engine family, and debuts in the Dodge Dart GT and Jeep Cherokee this year. The 2.4L powerplant is assembled at Chrysler’s Dundee, MI, plant alongside 1.4L and 2.0L engines available in the Dart.

Consumers have complained the smaller engines leave the Dart underpowered, so Chrysler is hoping the larger 184-hp 2.4L will address that shortcoming and drive more sales.

It supplants the World Gas Engine used previously by Chrysler and is a near top-down overhaul. Glen MacFarlane, chief powertrain engineer, calls the 2.4L Tigershark “90% new” in comments to reporters during the auto maker’s annual product showcase here.

For refinement, engineers added rotating balance shafts into the bottom of the all-aluminum block to offset vibration. The front mount was integrated into the front cover to stiffen the fastening point, and a 3-point mounting system was employed to isolate noise.

Engineers also placed an acoustic cover over the intake manifold and an acoustic heat shield over the exhaust manifold to reduce noise, vibration and harshness.

There are four valves per cylinder, and the electro-hydraulic MultiAir system, pioneered by Fiat for infinite variability in controlling the intake valves, has been optimized for fuel economy and performance, MacFarlane says.

The intake valve event now allows more internal exhaust gas recirculation, he says, “so we have a longer duration in that inlet on the opening side; you get more internal EGR for fuel economy.”

MultiAir II “simultaneously controls the opening and the closing point for the valve event,” MacFarlane says.

“With MultiAir I, you had to pick the opening or the closing – you couldn’t pick both. So this allows what we call hybrid mode, where you control both the opening and the closing of the inlet for a very short duration, and you can put that inlet anywhere in the cycle.”

Like the 2.0L, the larger MultiAir II Tigershark takes some cues from racing.

The powerplant employs a floating piston pin with diamond-like carbon coating, a commonly found material in the sport that provides a smooth surface for low friction. A 2-stage pressure release valve in the oil pump works to minimize the amount of work done to pump oil during city driving.

Polished exhaust rocker arms are another racing innovation integrated into the valvetrain – “an excellent refined product that works great in the Dodge Dart,” MacFarlane says.

Engineers opted for multiport fuel injection rather than direct injection. “Direct injection could be used on this, but we didn’t choose to for this application,” MacFarlane says. “But we’re meeting our targets.”

The 1.4L MultiAir comes with a turbocharged variant, and while he does not say whether the 2.4L will employ forced induction eventually, “there’s no reason why it couldn’t.”

Chrysler’s Tigershark to Move Outside of Dart
Dec 03, 2012