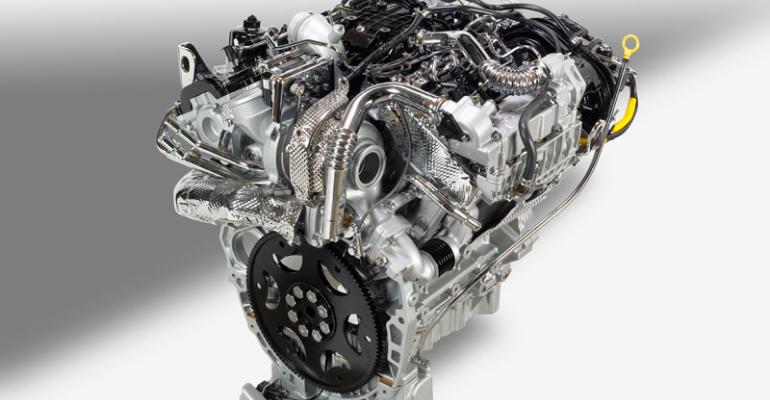 For Chrysler, Diesel Engine Turnaround Shorter Than Most

AUBURN HILLS, MI – Plans to roll out a new range of powertrain technologies this year, coupled with some compressed development timetables, have kept Chrysler engineers extra busy over the past 24 months, insiders say.

For example, the complicated task of mating the auto maker’s new 8-speed automatic transmission with a 3.0L diesel engine in the’14 Jeep Grand Cherokee – a first-time combination for Chrysler – was completed from sketch to street in less than two years.

“We started on it in February 2011. (There was) not much time,” Bob Lee, vice president-engine and electrified propulsion, tells WardsAuto.

The diesel engine results from collaboration among Chrysler, Fiat and longtime suppliers VM Motori and Bosch.

“There was lot of intensive effort, not just by the Chrysler folks but also Bosch and VM Motori,” the Chrysler engineer adds. “We had virtually daily coordination activities to pull this thing off, including weekends.”

The Ram 1500 also will receive the 3.0L, 8-speed diesel combination later this year.

“It’s similar but it’s not the same, so that extra time between now and launch will be very useful,” Lee says about fine-tuning the powertrain combination for the pickup.

Chrysler and Fiat worked in parallel to bring a diesel back to the U.S. auto maker’s lineup, with development split evenly between the two, Lee says.

“Diesels are very technically challenging products, and the U.S. market is the most challenging of them all,” he says. “More diesels means more work, which means more pressure.

That’s particularly true with Chrysler’s efforts to reintroduce the diesel, which is seen as a greater core-market opportunity this time around.

“We did do some experiments in the past with Liberty and Grand Cherokee a few years ago, and we learned a lot,” Lee says. “But the market wasn’t strong in that period of time. We now think that with the comeback of the market…and the need for fuel consumption improvement, the time’s right.”

Fuel economy is boosted by ZF-designed 8- and 9-speed transmissions, introduced in the Chrysler 300 and Dodge Charger last year. Last week, Chrysler announced more than $300 million in investments to its Kokomo, IN, factory to expand production of the gearboxes for application in additional vehicles.

“(The 8-speed) is a very flexible product,” he tells WardsAuto. “It’s a compact and light product that actually matches the weight characteristic and the building volume of the previous 6-speed.”

For now, the automatic can be used on all of Chrysler’s rear-drive vehicles.

Gradu says he is equally excited about the forthcoming 9-speed transmission designed for the auto maker’s front-drive vehicles. It debuts in the new Jeep Cherokee that replaces the Liberty in the third quarter and will be offered later in the Chrysler 200 successor.

“You can expect the same level of refinement, fuel economy and performance as you have with the rear-wheel drive (version),” he says.