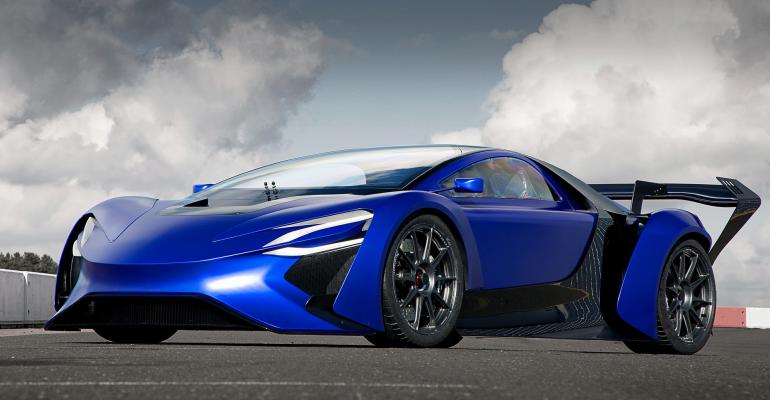 A microturbine sharing its driveshaft with a generator produces 36 kW of electricity, with 30 kW channeled to a battery pack comprising 2,376 lithium-manganese-oxide cells that directly powers six electric motors.

Gianetti initially will build 25 Techrules cars per year after the vehicle’s debut at the 2017 Geneva auto show.

Techrules hinted at the supercar now under development at the 2016 Geneva show held in March when it unveiled two concepts named the AT96 and GT96. Those cars’ design and execution were not received nearly as well as their technical concept and specifications.

The two concepts in effect were unauthorized restylings of the Lamborghini Gallardo, but Techrules’ main intention was to demonstrate its hybrid-electric TREV (turbine recharging electric vehicle) powertrain concept with a microturbine-generator as its core.

In the Techrules’ TREV configuration, the microturbine and generator share a driveshaft and both rotate at more than 96,000 RPM. The microturbine produces 36 kW of electricity, with 30 kW channeled to the battery cells via generators and 6kW reserved to auxiliary equipment such as the inverters.

The battery pack comprises 2,376 cylindrical lithium-manganese-oxide cells with a usable capacity of 20 kWh and 720V. The battery pack directly powers six electric motors weighing 28.6 lbs. (13 kg) each, one for each front wheel and two for each rear wheel. The battery-management system allows the microturbine generator to recharge the battery pack in about 40 minutes.

“In our vehicles, electric motors are used to drive the wheels, which effectively frees the combustion engine to exclusively convert chemical energy into mechanical energy and finally into electric energy. This is a major breakthrough, making it possible for us to use the highly efficient turbine engine as a superb range extender on our vehicles.”

The Italy-built Chinese supercar will challenge the most powerful and expensive Ferrari, Lamborghini, McLaren, Pagani and even Bugatti models. The yet-unnamed supercar will not carry the Giugiaro label, as the Giugiaro brand name is the property of luxury automaker Audi.

However, the Techrules car is expected to feature the architectural expertise and the masterful styling of Fabrizio Giugiaro and his father, Giorgetto Giugiaro, whose past electric-vehicle and hybrid-electric designs range from the Italdesign Lucciola to the Toyota Volta and Proton EMAS.

Fabrizio Giugiaro says his company will help with the car’s interior and exterior design as well as with the architecture and technical layout of the new car.

Fabrizio Giugiaro has a personal stake in the Techrules supercar’s success. The designer of the Lamborghini Gallardo and, more recently, the Italdesign Parcour, was meant to become second-in-command at both Lamborghini and Bentley shortly before a falling-out between Audi CEO Rupert Stadler and Italdesign Giugiaro that resulted in the Giugiaros selling their remaining stake in the styling and engineering company bearing their name to Audi.

Turin-based L.M. Gianetti has 50 years of experience building high-tech parts as well as entire racing cars for Fiat-Abarth, Alfa Romeo and Lancia, among others. Currently, they are cooperating with Hyundai and Ford on World Championship Rally cars and Bentley and McLaren GT series cars, as well as parts for Red Bull and Toro Rosso Formula 1 cars.

Techrules, an R&D enterprise financed and supported by Chinese chemical, advanced-material, avionic and transportation companies under the direction of the central government, also is working to develop sustainable electricity-driven mobility for Chinese transportation systems.

This initiative calls for providing electricity in China using a cleaner source than the currently predominant coal-burning plants, and TREV technology could be the first major step toward mass-produced EVs compatible with existing distribution infrastructures in China and most regions worldwide.

After launching its low-volume supercar, Techrules intends to develop technology for high-volume compact and subcompact cars to be brought to market within a few years.

The Giugiaros’ new operation, called GFG Progetti, is a spin-off of Giugiaro Architettura that employs about 20 designers, engineers and virtual modelers using futuristic simulation and virtual reality technologies. The team also will develop scale and fullsize models, as well as showcars and running prototypes, in cooperation with specialists available within Turin’s automotive-design community.

GFG Progetti says it has signed several contracts with Chinese, European and Japanese automakers, and Fabrizio Giugiaro said in January the new studio was working on “three new projects for two different carmakers.” He declined to name them, but informed sources say one of them is FAW, one of China’s largest domestic automakers. The relationship with Techrules was established in March at the Geneva show.