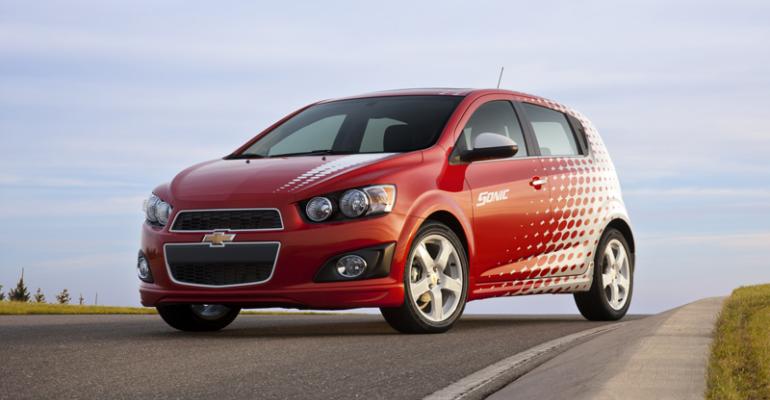 The all-new Chevy Sonic represents a great example of the upscale small-car trend now gripping the entry-point of the market.

General Motors silenced critics last year who said it could not build an attractive small car when the new-for-’11 Chevrolet Cruze nabbed a Ward’s 10 Best Interiors award, and now in 2012 the auto maker proves that was no fluke by earning the coveted prize for its ’12 Chevy Sonic.

The all-new Sonic stands as a great example of the upscale small-car trend gripping the entry point of the market, which now commands an 18.3% share of U.S. light-vehicle sales, compared with 15.3% five years ago, according to WardsAuto data.

Sales of the Sonic also are steaming ahead, with deliveries through March up 67% compared with its Aveo predecessor in like-2011.

“This is a sub-$20K Chevy?” remarks editor Christie Schweinsberg on her Sonic score sheet. “The world has changed.”

The predominate design element is a motorcycle-inspired instrument cluster featuring an oversized, round analog tachometer coupled with a rectangular screen with digital readouts for speed, fuel level and fuel economy, trip, odometer and gear position.

A dozen small round cutouts arrayed horizontally – six above and six below the speedometer housing – function as indicator lights for items such as seatbelt use.

A glance at the cluster gives drivers all the information they need, not unlike a motorcycle rider with only a split-second to check dials.

It nails Sonic’s target demographic of young up-and-comers, who might mix driving duties with a carload of chatty friends and blaring music.

The idea is owed to the Sonic’s interior designers, an international team sharing a base in Asia and a passion for motorcycles. Their hobby spills over into their interpretation of Chevy’s traditional dual-cockpit design theme, as they retain some of the flowing forms but choose to emphasize attention to the center stack.

The Sonic delivers surprising comfort, too. It’s a bit bigger than others in its class and certainly roomier than the Aveo.

Like others in the segment, the Sonic’s passenger compartment leans on plastic materials to keep costs down, but refreshingly straightforward execution make this fine interior highly appealing.