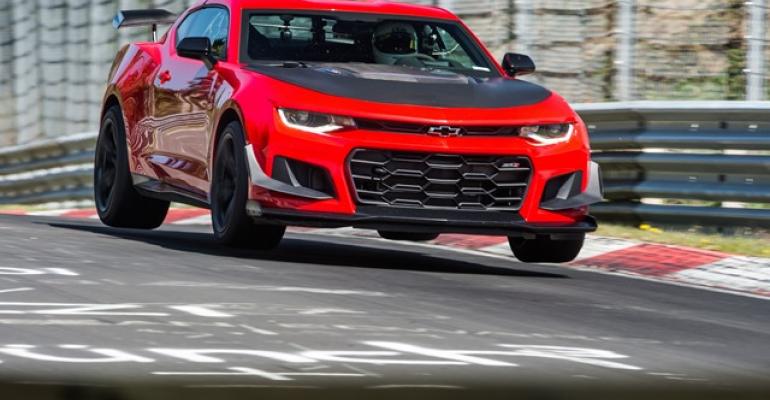 The track-focused Camaro with a 6-speed manual transmission mated to its 650-hp supercharged LT4 V-8 engine was 13.56 seconds faster than a ZL1 outfitted with a new 10-speed automatic.

The Chevy Camaro just keeps getting faster and faster, this time setting yet another new mark for the 2-seat coupe at the famed Nürburgring Nordschleife in Germany.

Test crews using a 2018 Camaro ZL1 1LE ran the track’s 12.9-mile (20.8-km) north loop in 7:16.04. The ZL1 1LE is a special track-focused Camaro with a Tremec 6-speed manual transmission mated to its 650-hp supercharged LT4 V-8 engine. Its time was 13.56 seconds faster than a record loop for the nameplate set earlier this year by a ZL1 outfitted with an all-new 10-speed automatic transmission from General Motors but without the 1LE track package.

“With chassis adjustability unlike any vehicle in its peer group, the Camaro ZL1 1LE challenges supercars from around the world regardless of cost, configuration or propulsion system,” says Al Oppenheiser, chief engineer-Camaro.

“To make up more than a second per mile on the Nordschleife compared to the ZL1 automatic is a dramatic improvement and speaks to the 1LE’s enhanced track features,” he says in a statement.

Video of the ZL1 1LE making the record run suggests driving conditions were optimal for the track, nicknamed the Green Hell for its difficulty. However, the ZL1 1LE also is the optimal Camaro for the track with Dynamic Suspension Spool Valve damping technology in the front and rear of the chassis from racing expert Multimatic.

GM and Markham, ON, Canada-based Multimatic began collaboration a few years ago to enhance the track capability of the ’14 Chevy Camaro Z/28, which marked the production application of DSSV. GM also applies the technology to the off-road-oriented ’17 Chevy Colorado ZR2 midsize pickup.

GM says the suspension was adjusted specifically for the Nürburgring and the production Goodyear tires.

“The harder you push the Camaro ZL1 1LE, the more it rewards you on the track,” adds Bill Wise, ride and handling engineer for Camaro. “It offers total control, with the confidence that it will deliver lap after lap.”

The Camaro was redesigned for the ’16 model year and the sixth-generation model shaved close to 225 lbs. (102 kg) off its platform to help mitigate complaints of understeer from its enthusiasts. The latest ZL1 variant came out late last year and the $70,000 ZL1 1LE arrives in dealer showrooms later this summer.

However, the redesign has not pushed the Camaro to reclaim its coveted U.S. segment sales crown, which the Ford Mustang swiped in 2015 by nearly 45,000 units. So far this year, Camaro sales trail its rival 38,422 units vs. 31,876.