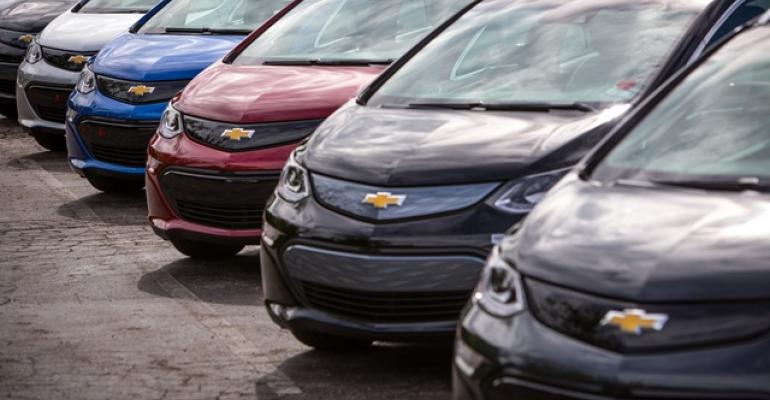 Availability likely will be tight, given shipments began just weeks ago, but the cars will be ready by Feb. 1, GM says.

DETROIT – For Californians, a Chevy Bolt is just an app-tap away.

“We are plating them and titling them,” she tells WardsAuto during an interview at the North American International Auto Show. “It’s a game-changing car and I’m thrilled it’s coming.”

Next to getting the Bolt out of the factory and into the hands of its first customers, which began late last month, deploying the car into Maven fleets is the next big step in the launch of the 238-mile-range (383 km) EV. As a maneuverable little CUV with excellent utility, GM thinks it is the perfect product for car-sharing services such as Maven.

Bolt availability likely will be tight, given shipments began just weeks ago and initial retail demand in California, as well as its second launch market of Oregon, is high.

But the cars will be ready by Feb. 1 both to everyday folks and to Maven Home, which provides car-sharing to closed residential communities. Maven Business, the mobility unit’s third channel, also will get the Bolt for rent to drivers of Uber and Lyft ride-hailing services.

And while Maven offers a full portfolio of GM vehicles for short-term rental, the Bolt may be among the most attractive because the service’s core customers are innovation-hungry Millennials. In fact, the 20- and 30-something cohort is Maven’s key market, accounting for 78% of its customers, Steyn says.

“We are talking to audiences in large metropolitan cities where, very honestly, core (automotive) brands are losing grasp, on both coasts,” Steyn says in an interview.

In that respect, Maven is opening the GM portfolio to future buyers who may have low awareness of the automaker’s Chevrolet, Cadillac, Buick and GMC brands, or the level of available connectivity in those cars, such as wireless hotspots and OnStar concierge service.

“The opportunity to get Maven customers into brand-new vehicles across the GM portfolio, from the Bolt to Cadillac Escalade, is huge exposure,” says Steyn, who joined GM in 2012 from aluminum giant Alcoa to lead M&A efforts at the automaker. She took over Maven for its launch one year ago.

“At some point, we think we can convert these Maven customers, at the right point in their lives, to (being) a buying customer,” she says.

In addition to raising awareness of GM products, as well as providing the automaker a new revenue stream through hourly rental fees, Maven is expected to raise the residual value of its cars and trucks. Instead of sending vehicles it buys back from daily-rental companies or regains off lease to the auction block for a minimum return, GM can slip them into the Maven fleet and book revenue off them throughout their lifecycle.

“We are thinking about the lifecycle of the car very strategically,” Steyn says. “We are drafting a changing world, how the customers think about it and on the flipside we are adding value to the core business.”

Steyn says after spending the past year launching Maven into 16 markets and enlisting some 20,000 members who have driven 56 million miles (90.2 million km), she looks forward to bringing its services to additional metro areas around the world, as well as helping cities develop EV-charging infrastructures. With access to a wealth of vehicle-use information, Steyn says GM could offer valuable input to city planners.

“That is the next step all of us will have to take in this world,” she says. “We have a chance to make a serious mark. We can even engineer future (mobility) vehicles more properly because of the information we get out of them today.”

As more automakers join the car-sharing and ride-hailing segment, Steyn says the onus will be on GM to excel in every aspect of service to differentiate itself.

“Competition is good. We welcome it. It will make all of us better,” she says.

But Steyn also has a message for her new rivals: “You need to be prepared to iterate rapidly and listen to customers and respond within days, not years.”