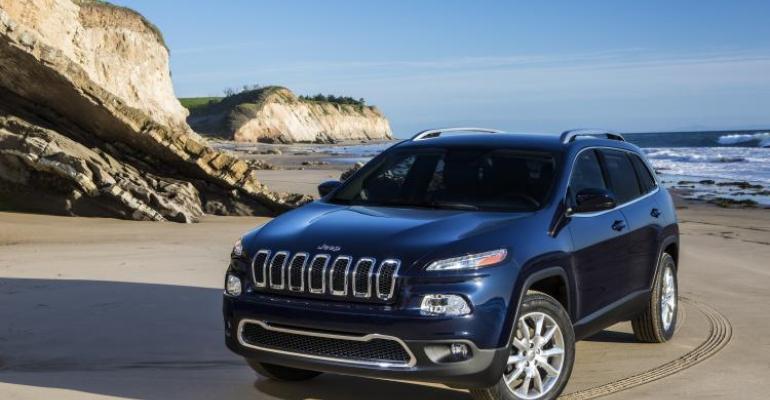 The Liberty replacement carries Jeep&rsquo;s trademark 7-slot grille, but has three sets of headlamps &ndash; including a sharply angled top pair unseen on any Jeep vehicle to date.

Jeep christens its long-awaited D-segment SUV as the Cherokee, putting to rest months of speculation over whether the vehicle would continue to carry the Liberty name in North America.

The auto maker had planned to publicly reveal the redesigned SUV at the New York Auto Show in March, but instead releases images this week. The ’14-model Cherokee will be built at Chrysler’s Toledo Assembly Plant in Ohio and will begin sales in the third-quarter.

Fiat-Chrysler CEO Sergio Marchionne had said earlier the Cherokee would be the first in the Chrysler lineup to receive a ZF-built 9-speed transmission, built at the auto maker’s Kokomo, IN, plant.

The auto maker is releasing few technical details about the Cherokee this week but is promising “best-in-class capability, exemplary on-road driving dynamics, and fuel economy improvements of more than 45% versus the outgoing midsize SUV model.”

The new Cherokee, borrowing the longtime nameplate used from Jeep’s American Motors days, marks a styling departure from its predecessor. It carries Jeep’s trademark 7-slot grille, but has three sets of headlamps – including a sharply angled top pair unseen on any Jeep vehicle to date.

The front fascia also departs from traditional Jeep styling, coming to a point rather than running flat. The Cherokee’s sheet metal is more rounded and less boxy than the outgoing Liberty.

Chrysler has not released any interior photos of the new model.

“Exterior looks are just part of the total package,” the auto maker writes on its Facebook account. “There's interior and, for a Jeep SUV, there's the off-road capability. Those fun details are still to come.”