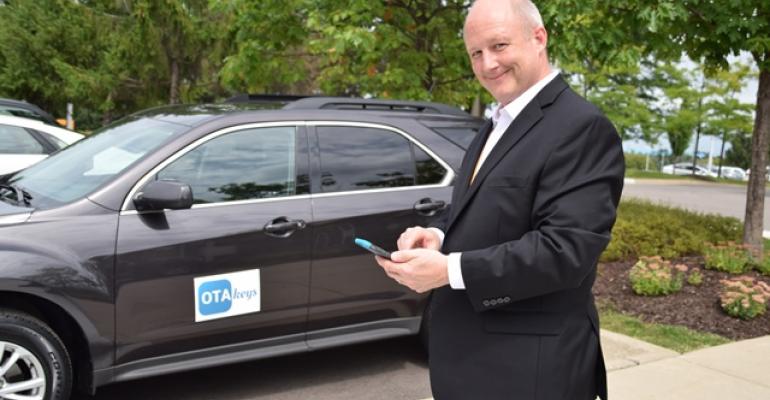 Continental is introducing two technologies intended to give smartphones access to authorized vehicles, but a company executive says he sees conventional fobs sticking around &ldquo;for the foreseeable future.&rdquo;​

AUBURN HILLS, MI – For those who crave something tangible, don’t worry, the key fob isn’t going away anytime soon. For those who can’t wait to ditch their key fobs, the opportunity might come within a few years.

Continental, the German supplier that dominates the market for key fobs, is introducing new technology that could digitally connect a person’s smartphone more directly to his or her vehicle, allowing it to lock and unlock doors, start or turn off the engine and perform other functions.

The world lives by smartphones, and the number of smartphone subscriptions is expected to balloon from 2.6 billion in 2015 to 6.1 billion by 2020. Continental believes mobile devices can eliminate the need for a physical fob and key while communicating with the vehicle in ways that are convenient, secure, reliable and safe.

“We expect connectedness to be enhanced by the automobile,” Michael Crane, Conti’s vice president-Body & Security, tells journalists at the company’s tech center here. He says there are 210 million connected cars on the road today, and the number will more than double by 2021.

“And I expect someday that my vehicle is the most important connected device that I own. All these things work together to accelerate progress.”

Continental in 1998 introduced the first passive start and entry (PASE) device, which uses radio- or low-frequency waves to let a vehicle owner open the door without touching a button on a fob and then start the car by pushbutton rather than a conventional key.

The supplier’s fourth-generation PASE system debuted three years ago, and the fifth generation arrives in 2018. By 2020, some 75% of new cars will use PASE, says Mauricio Hernandez-Distancia, director-Body & Security R&D for Continental North America.

The supplier’s next technology leap is Smart Access, which uses Bluetooth Low Energy or Near Field Communication to let the vehicle recognize a smartphone loaded with an app when it is within 6.6 ft. (2 m) of the vehicle – basically a virtual key.

The first generation of Smart Access, expected to be on the market within the next two years, will enable hands-free passive entry, remote engine start, car illumination at night, silent remote diagnostics and over-the-air reprogramming.

Continental says its second-generation Smart Access system will add passive start to the capabilities, as well as remote unlocking as the smart key approaches and automatic locking when the owner walks away.

A similar technology, intended for rental-car companies, fleets and car-sharing applications, allows for virtual keys to be transmitted over-the-air to smartphones authorized to receive them for driving a particular vehicle.

The technology enables a smartphone to access a vehicle if a rental or car-sharing agreement is in place, or if an employee needs a fleet vehicle for a specific time.

Via Bluetooth, the smartphone communicates not with the vehicle but instead with a car-sharing module plugged into the OBD2 connector. The module communicates through a conventional link to the car through the RF protocol.

“I can take any existing vehicle today and make it work with a car-sharing module and provisioning keys, and I can manage the entire process,” Crane says.

To participate in such a program would require a smartphone loaded with an application that requires a user log-in. A car then could be booked with the smartphone.

“As you walk out to the car, you pull up the app on your phone,” Finney says. “If it’s within your reservation window, you get your virtual key that will grant you access to the vehicle and give you the ability to start the car.”

When done with the vehicle, the virtual key will no longer be valid and the process is complete.

“And the system can tell you how much fuel you used, how many miles you drove and if you have to refuel,” he says.

The OTA Keys JV has launched the technology with six customers in Europe, and the first U.S. application is expected to be announced this year, Finney says.

Giving smartphones so much capability opens the door to eliminating fobs and keys, but only if push-button ignitions continue to gain popularity.

In 2013, 25.4% of light vehicles sold in the U.S. had push-button start, and that's grown to 44.7% in model-year ’16, according to WardsAuto data. FCA North America, for instance, is adopting push-button start across its entire portfolio.

By the end of 2016, Continental estimates more than 50% of vehicles sold in the U.S. will have push-button start.

But the trend may take a long time to play out.

“We don’t see the imminent demise of the key fob because there might be some segments of the market that still like that,” Crane says. “We see them co-existing for the foreseeable future.