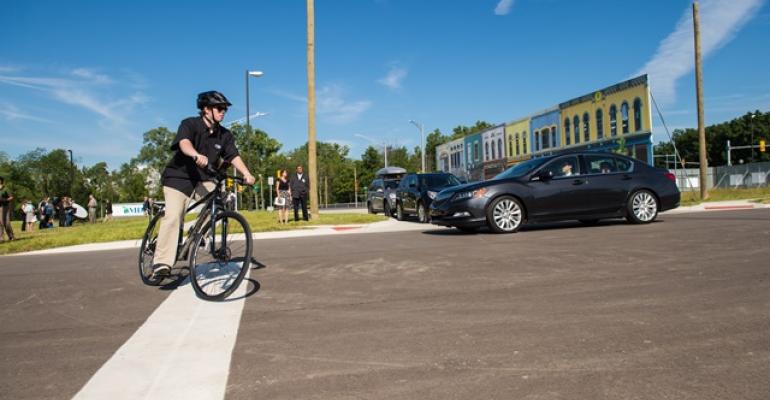 Autonomy may conjure disturbing images in the minds of consumers of people grabbing a few winks in the back seat on their morning commute.

DEARBORN, MI – What’s in a name? A heck of a lot, according to industry experts who think the advanced driver-assistance technology coming to vehicles in the coming years should be characterized as automation rather than autonomy.

“Calling (cars) autonomous creates an expectation,” says Steve Underwood, director-Connected Vehicle Proving Center at the University of Michigan. “It oversells the vehicle. We have to be careful. Calling them automated, people get that.”

Autonomy, a panel of experts argues at the Autonomous Car Detroit conference here, may conjure images in the minds of consumers of people grabbing a few winks in the back seat on their morning commute.

That day is far into the future, they say, so it falls upon the industry and policy makers to keep consumer expectations in check.

“That scares people,” says Kirk Steudle, director-Michigan Department of Transportation and an advocate of standardizing automation as the word to describe highly advanced driver-assist systems. He says anything else suggests an over-reliance on artificial intelligence, a thought that could impede consumer acceptance of a technology seen dramatically enhancing highway safety.

“The message to the public is going to be very important going forward,” he says.

The Society of Automotive Engineers has been working to advance automation to the forefront of the technology’s lexicon. SAE also has established a standard for defining automated driving. The six levels of automation range from zero to full automation and each level is given a specific description.

Following SAE’s definitions, automated driving on freeways should be widespread by 2020, Underwood says. By 2025, automation will creep into urban areas, he offers, and in 2030 people should experience full automation in some light vehicles, such as taxis.

“The forecasts are pretty good,” he says before warning the technology has a lengthy runway.

Even the touted automated car from Google is hardly perfect, Underwood says. “That is not a fully automated vehicle. How many times must a human intervene? Hundreds. And they are as far along as anyone in this area. (The technology) is just not ready for prime time.”

Social questions around automation also remain unanswered, offers John Maddox, assistant director-Mobility Transformation Center at the University of Michigan. For example, it is expected automation will ease the grind of the daily commute and perhaps spur people to move farther from their jobs.

“It could create more sprawl,” he says. “Communities are just starting to talk about that.”

And what if an automated vehicle bound for a crash must decide between two objects to hit? Up to now, that decision, and the subsequent guilt, has been left to humans, Steudle observes.

“That is very difficult for computer programmers right now,” he says.

But the expectation is that consumers demand eventually will push the technology forward. Priyantha Mudalige, group manager-R&D at General Motors, points to the popularity of current automated technologies such as lane-keeping and automatic braking.

“People embrace them,” he says.

However, consumers will take some convincing, says Maddox, and that may not be a bad thing.

“Automation holds great promise,” he says. “But we have to be mindful of the potentially negative implications. We have to prove that it will better. Embrace it positively, but be skeptical.”