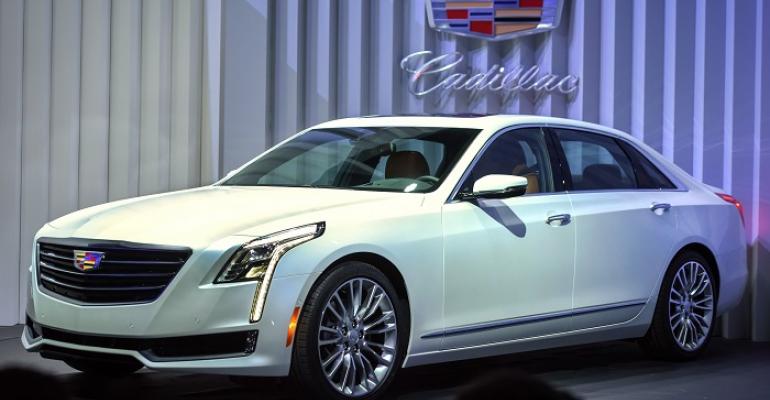 GM boasts the large luxury sedan due late this year in rear-wheel and all-wheel-drive layouts, will achieve levels of performance, efficiency, agility and technological marvel unseen in the segment.

The ’16 Cadillac CT6, the first of eight new products meant to recharge the General Motors luxury brand, makes its debut in New York.

GM boasts the large luxury sedan, due later this year in the U.S. with rear-wheel and all-wheel-drive layouts, will achieve levels of performance, efficiency, agility and technological marvel unseen in the segment.

“The CT6 is nothing less than an entirely new approach to premium luxury – and an approach only Cadillac can offer,” says Cadillac President Johan de Nysschen, who was hired last year to architect and execute the brand’s $12 billion retooling.

“It is a bold endeavor with unmatched dynamism that reignites a passion for driving in large luxury vehicles. In short, it is prestige luxury reimagined,” he says in a statement ahead of the unveiling at Brooklyn’s Duggal Greenhouse, a trendy event venue just a stone’s throw from Cadillac’s new headquarters in Lower Manhattan.

The CT6 gains efficiency and agility from all-new, state-of-the art powertrains and one of the industry’s most aluminum-intensive body structures.

Engine choices include a 265-hp 2.0L 4-cyl. with gasoline direct injection, a 335-hp 3.6L GDI V-6 and a range-topping, 400-hp 3.0L twin-turbo GDI V-6. The turbo V-6 is one of the most power-dense units in the segment. A pair of newly developed 8-speed automatic transmissions put the power to the pavement.

The body structure of the CT6 incorporates 11 different materials, an execution widely seen as one of the industry’s boldest mixed-materials strategies, to tip the scales at an estimated 3,700 lbs. (1,665 kg). GM says the CT6 dimensions and spaciousness match the short-wheelbase BMW 7-Series but is lighter than the smaller 5-Series.

“Every panel of the body-in-white is optimized with innovative joining techniques,” says Travis Hester, executive chief engineer-Cadillac CT6. “It’s an uncompromising approach that provides the best balance of strength, lightness and refinement.”

The all-new Omega architecture of the CT6 leverages no fewer than 13 high-pressure castings in its body structure to achieve the balance between lightness and stiffness, as well as what GM calls “bank vault” levels of quietness.

GM received 21 new patents for the Omega architecture, which will take advantage of the automaker’s most advanced manufacturing methods when production begins at its Detroit-Hamtramck, MI, assembly plant.

Models with AWD employ a continuously variable clutch to infinitely vary power delivery to the front wheels, up to 959 lb.-ft. (1,300 Nm) of road-gripping torque, GM says.

The front suspension is a lightweight, high-arm multilink short-long arm design, while the rear end receives a 5-link independent setup.

A technology GM calls Auto Vehicle Hold bows on the CT6. The system prevents the vehicle from creeping forward, or backwards, when the driver’s foot is off the brake. It is intended to reduce driver fatigue during stop-and-go traffic and add control on steep grades.

The CT6 brings a bevy of new connectivity technologies to market, too. Those include a 360-degree camera view displayed on the car’s 10.2-in. (26-cm) center touchscreen; a surround-view video recording system to record front and rear views while driving; a system to enhance night vision in the driver information center; an interior rearview mirror that uses a camera instead of conventional technology; and park assist that adds automatic braking to its performance.

GM says the touchscreen of the CT6 infotainment system, which it calls CUE, reacts faster than before. That is a key complaint of the current iteration. The new CUE unit also adds a center-console touchpad for controlling the system with the driver’s resting arm instead of touching the screen, which previously could lead to command mistakes on bumpy roadways.

Wireless smartphone charging and OnStar 4G LTE with wireless Internet capability rounds out the connectivity elements of the CT6.

“This is a car designed for passionate drivers,” says Andrew Smith, executive director-global design at Cadillac. “CT6 is low, wide and sleek, which is just what you’d expect in a lightweight performance sedan. There is a great dash-to-axle proportion that reinforces the dynamics of the rear-wheel-drive architecture.”

Extensive use of exterior LED lighting adds further drama to the car’s design. The LEDs are employed a new way on the CT6, and the grille also receives a new design.

Inside, GM says, an emphasis was placed on creating rich, expressive and spacious environments, and the cabin’s leather, wood and carbon-fiber trim are used in unprecedented ways.

Massaging seats feature five different programs, and the rear seats recline and adjust fore and aft by 3.3 in. (8.4 cm) for generous legroom. The front seatbacks are home to 10-in. (25 cm) infotainment screens, while rear-seat armrests have HDMI and USB ports. The climate control can be personalized for each seating position, along with ionizing air purification.

“Luxury brands are built from the top down,” say Uwe Ellinghaus, chief marketing officer at Cadillac. “Adding a dynamic, top-of-the-range car is central to Cadillac’s elevation and global growth.”

GM plans to begin offering the CT6 in Europe, Korea, Japan, Israel and the Middle East in early 2016. Chinese-market models will be built at an all-new facility in the country beginning in 2016.