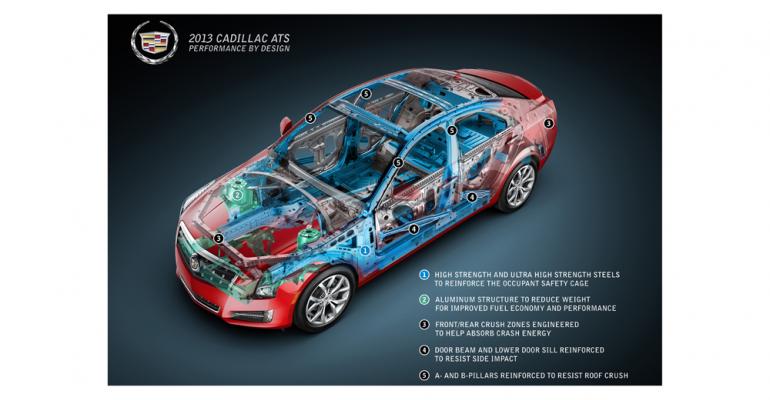 Making a lightweight car bears additional fruit. The engineering and materials uses, as they become more affordable, can be carried over to other vehicle projects, so even hulking trucks can start shedding pounds.

ATLANTA – By making the new-for-’13 Cadillac ATS the lightest vehicle in its segment, engineers accomplished perhaps an even bigger feat by changing how General Motors will approach the development of all future vehicles.

“It’s a huge accomplishment for our engineering group,” he tells WardsAuto at the media launch of the ATS here. “There was a lot of celebration that we’re best-in-segment from a mass standpoint.”

In the compact sports sedan segment occupied by the new ATS, few attributes carry more importance than vehicle mass. Low mass leads to what enthusiasts call “toss-ability,” or the light-footed sensations that make the cars so addictively fun to drive.

But making a lightweight car bears additional fruit. The engineering and materials used, as they become more affordable, can be carried over to other vehicle projects, so even hulking trucks can start shedding pounds.

Experts think auto makers must take upwards of 800 lbs. (363 kg) of weight out of vehicles just to meet the 2016 standards, and the 2025 rules will require even more reductions.

Kelzer says it took one GM engineering team willing to take risks to demonstrate a maker of historically heavier vehicles can design something lighter.

“As we looked at our future (vehicle) programs, people were gulping hard when they were told the mass they had to take out,” Kelzer says. “And then they said, ‘Check out these (ATS) guys. They did it.’ Now they are meeting their mass targets, too.”

To accomplish its task, the ATS team switched gears from traditional GM development practices on a number of fronts.

As usual, the auto maker benchmarked the competition, but once the team arrived at its weight goal for the ATS, it did not deviate. In the past, new input from marketing, manufacturing or a supplier might lead to compromises. Not this time, Kelzer says.

“Our (mantra) was ‘Every gram, by every engineer, every day,’” he says. “When an engineer would come in on a design meeting, we would ask, ‘What does this mean from a gram standpoint? What sort of mass are we talking about?’”

The ATS team also was given the opportunity to fail, unlike the GM of old.

“In the past, if we put a vehicle together and put it through durability testing and saw no failures, we all did high-fives and said it was our best design ever,” Kelzer recalls. “Well, guess what – we probably over-designed it.”

So on the ATS, GM leadership challenged the engineering team to take the risk of starting light and testing components to their failure point, rather than start from a point where the weight goal might be achieved most quickly.

“We wanted to take it to the limit, and it led us to different conclusions than we anticipated,” Kelzer says.

For example, logic would dictate the use of a lightweight wheel bearing to make a front suspension less heavy. But an ultralight wheel bearing would call for a more durable cast-iron knuckle instead of preferred aluminum.

“Those sorts of material-selection studies are coming out of this,” Kelzer says.

The ATS uses items such as an aluminum hood and magnesium engine mounts, as well as aluminum shock towers – a first for GM. The body capitalizes on 12% ultra-high- strength steel and 6% press-hardened steel, much higher grades and usage levels than GM would have attempted in the past.

Those choices allowed the auto maker to use other like items, such as lighter wheel materials to handle the vehicle’s mass and lighter brakes still capable of delivering anticipated best-in-segment stopping power.

Thinking light also aided in achieving the highly desired 50/50 weight distribution between the front and rear of the ATS.

By using lighter parts elsewhere, engineers could go with a cast-iron differential instead of an aluminum one. The aluminum differential would be lighter, but not strong enough under extreme temperatures and would require efficiency-sapping cooling.

Cast iron provides more durability, contributes to better fuel economy and eliminates  some weight in the rear to get to 50/50 mass distribution.

The ATS team also changed the way GM addresses topology, or the blueprint for a car or truck.

For example, teams from chassis and suspension, which represent the two heaviest elements of any vehicle, worked side-by-side to determine exactly where suspension loads from both the roadway and movement of the vehicle enter the body.

Perhaps most importantly, structural members of the chassis were lined up with those suspension loads. In the past, GM might have bent a structural piece to accommodate design or manufacturing, which would compromise lateral motion and stability and lead to the addition of weighty braces or brackets.

“We would do side projects to maintain the efficiency of the design, rather than talking ourselves into making a change,” Kelzer says.

Other vehicle programs now will leverage the same topology and risk-taking approach.

“The learning is right there; it is implicit,” Kelzer says. “The tools that we developed are now the tools that everybody can use. We proved it on the ATS, and that behavior is now expected on all our other products.”