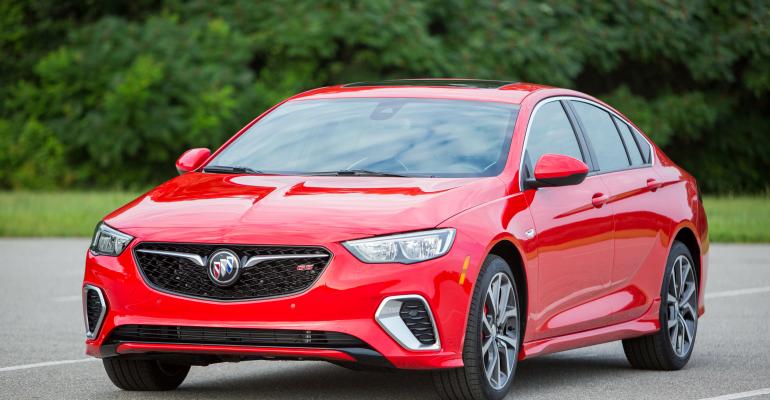 MILFORD, MI – Saying he thinks the Buick Regal GS finally gets all the bits and pieces the storied designation deserves, General Motors executive Duncan Aldred joins his engineering team to pull the cover off an all-new ’18 model packing a 300-hp V-6 and handling dynamics sure to put it on par with rivals far surpassing its $40,000 sticker price.

“I’ve felt the GS should have a different powertrain since I arrived at Buick,” says Aldred, vice president of global Buick-GMC since 2014, when the previous-generation Regal GS received a mid-cycle enhancement to a more potent 4-cyl. turbo.

But Aldred says he always thought the car should pack a large, naturally aspirated engine recalling historic Buick GS models such as the ’65 Riviera. But while the old Rivvie leaned on a large displacement V-8, the new Regal GS uses a 3.6L (LGX) V-6 with 310 hp and 282 lb.-ft. (382 Nm) of torque with advanced fuel-saving cylinder deactivation and stop/start technology mated to an all-new Hydra-Matic 9T50 9-speed automatic transmission.

The Regal GS also receives an active twin-clutch all-wheel-drive system sending almost infinitely variable torque between the front and rear wheels. The system cannot mete out torque to individual wheels, as some advanced AWD systems with torque-vectoring do.

The car rides on a 5-link rear suspension with continuous damping technology. As with the previous-generation Regal GS, drivers can switch between normal, Sport and GS modes to dial up items such as the electronic power steering system, suspension and throttle mapping from a leisure-lane commuter-car to a highly spirited sport sedan built for the corners.

Performance brakes with Brembo front calipers provide stopping power, 19-in. wheels are shod with premium Continental all-season rubber and the car’s driver and front passenger snuggle into heated, cooled and massaging sport seats with adjustable thigh and back bolsters. The driver hooks a flat-bottom steering wheel and accelerator and brake pedals have metallic inserts.

The engine, transmission, brakes and seats, as well as a few other bits and pieces such as special badges and sill plates, are unique to the GS, which joins the ’18 Sportback 5-door and TourX estate car in a 3-model Regal lineup at Buick dealers by the end of the year.

Aldred also admits sinking precious product-development and marketing money into sedans at a time when CUVs, those crossovers with SUV-like styling and a car-like ride, dominate the market also goes against trend. But 4-door cars remain the No.2 segment in the U.S., he adds.

“Product decisions are taken over a long period of time, but we’re delighted we’ve got a full line of cars and crossovers in the Buick family,” he tells WardsAuto at the global reveal for the Regal GS at GM’s sprawling Milford Proving Ground outside Detroit.

“It’s no secret that crossovers contribute 70%, 75% of our current sales, but we felt it was very important for our brand to have a Regal with a little bit of difference, a sportback configuration, the TourX and the halo of a GS – and not just any GS, but something special.”

​Aldred says GM product planners purposely avoided any electrification in the current Regal lineup, as some targeted competitors such as Volvo are successfully exploiting, because U.S. demand for the propulsion systems is weak.

“I honestly don’t see demand” for the technology in America, he says, adding diesel would not be a fit within Buick, either. But with the brand’s strong presence in China, where the government strongly favors new-energy vehicles, he says Buick could react quickly with an electrified model for the U.S. and Canada if the market shifts there.

The Regal GS caps an 8-model burst of new product from Buick over the past several years, which includes compact, midsize and large CUVs, as well as the midsize Regal 5-doors and a large premium sedan.

“Go back four or five years and think of Buick,” Aldred says. “Look around now. It’s a ‘wow’ portfolio that truly lives up to the attainable luxury tag and stands should-to-shoulder with Audi, Lexus (and) Acura with a better value proposition.”

GM derives the Regal lineup from its former Adam Opel unit in Germany, where it is assembled along the home-market Insignia, Insignia Country Tourer and Insignia GSi. Aldred says the purchase agreement for Opel and its U.K. sister brand by French automaker PSA Peugeot Citroen ensures supply of the Buick models for the traditional lifecycle of a North American product.