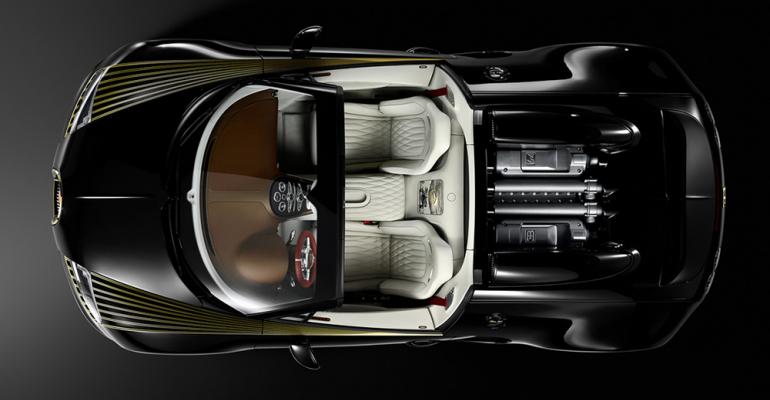 As with all models in the Legends series, the new car is limited to a production run of three copies and is available for a net price of &euro;2.15 million.

TURIN – Bugatti will reveal the fifth model in its six-part special “Legends” series at the Beijing auto show this month.

As with all models in the Legends series, the new “Black Bess” is limited to a production run of three vehicles and is available for a net price of €2.15 million ($3 million). All 12 Legend cars built so far, each a work of art and craft, have been sold.

The latest Bugatti Veyron Vitesse takes its name from the legendary Type 18 Black Bess, which went down in automotive history as one of the first ever street legal super sports cars. An original Bugatti Type 18 also will be on display in Beijing.

The Type 18 was one of the most important Bugattis of the pre-war era, both ahead of its time and in a league of its own thanks to its impressive technical features. Its inline 5.0L 4-cyl. engine was capable of producing over 99 hp. With a top speed of 100 mph (160 km/h), a feat deemed virtually unbelievable for the times, the Type 18 was a true racing thoroughbred.

“As the fastest road vehicle of its time, the Type 18 was in a class of its own. It truly is the legitimate forerunner for the Veyron, and is therefore a Bugatti Legend,” says Bugatti President Wolfgang Schreiber. “Over the course of its history, Bugatti has not only been responsible for crafting enormously successful race cars, but has also created some outstanding road vehicles.”

With a maximum speed of 254 mph (409 km/h) with the roof down, the Vitesse is the fastest production roadster ever built.

The Black Bess’ carbon-fiber body is painted black with gold-colored accents, including some components coated in 24-carat gold.

Inside the car is lined with leather, with light beige covering the headliner, footwell, seats and center console and a slightly contrasting “Havanna” tone for the dash and door trim. The steering wheel is clad in red leather.

The door panels feature hand-painted renderings of the historic Type 18 Black Bess. Each of the six panels for the three cars has a unique sketch.