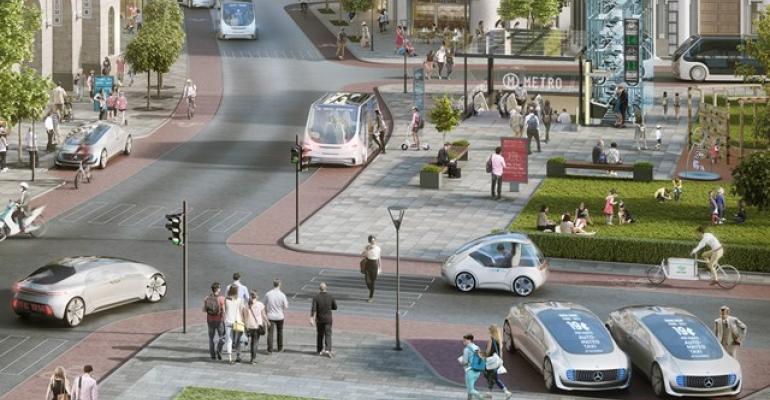 A key piece of the supplier&rsquo;s bullish outlook is mobility solutions, where autonomous, electric and connected-vehicle technologies are the growth drivers.

FARMINGTON HILLS, MI – U.S. light-vehicle sales may even off this year after seven straight years of spectacular growth and back-to-back record annual deliveries in 2015 and 2016, but heavyweight supplier Bosch North America thinks the market has plenty of gas left in the tank.

Like other major parts suppliers in North America, Bosch is coming off a strong 2016 where sales totaled $13.7 billion to finish just shy of the record $14 billion a year ago, due to customers reducing car production as the market trend to trucks heightened. The region accounted for 17% of The Bosch Group’s $80.9 billion in global technology and services sales to the commercial and retail sectors.

Bosch North America’s suite of mobility solutions, which comprises the sale of hardware, software and services to automakers and other transportation providers, accounted for $9.2 billion of the unit’s total sales last year.

Mansuetti forecasts another strong year for the mobility sector which, complemented by gains in consumer electronics and an anticipated recovery by industrial technology customers in the key markets of agriculture and mining, will push Bosch North America to 3% sales improvement. He reiterates the unit’s 2020 sales goal of $20 billion.

A key piece of Bosch’s bullish outlook is mobility solutions, where autonomous, electric and connected-vehicle technologies are the growth drivers.

Stepper says a key emerging expertise for Bosch, a technology often overlooked among ADAS items such as automatic emergency braking and lane-keep assist, is assisted parking and low-speed maneuvering. He considers it fertile ground for the supplier.

“Sometimes drivers respond (that) they would not like to give up control, they enjoy driving,” Stepper says. “But we’ve yet to find a single soul who says, ‘I enjoy parking.’”

Stepper says Bosch wants not only to eliminate the tedious tasks of finding parking, but also take over maneuvering the vehicle into often tight and sometimes bumper-bruising parking lanes. Bosch first showed the technology in North America last year in the form of home-zone park assist, which can guide a car into a designated parking space by a smartphone from up to 208 ft. (100 m) away. It is expected to come to North America from an OEM by 2019.

Bosch continues to support the emerging self-driving market with Level 1 and Level 2 assistance and automation technologies, such as traffic-jam assist, in which the car takes over steering, acceleration and braking under certain conditions but the driver remains in control of all other driving tasks.

“There’s more to come this decade on this topic,” he says.

Level 3 through Level 5 autonomous driving, which ranges from full autonomy under specific conditions to fully self-driving, is on the verge of entering the market and OEMs are taking a number of different approaches. Stepper says Bosch actively is participating in each.

“That is an exciting topic,” he says. “There are several parallel approaches to introduce automated driving into the market. They are all coming to the market in roughly the same timeframe and Bosch is part of all of the approaches.”

Stepper expects urban automated driving within the next decade and Level 4 or Level 5 soon afterwards.

But future autonomous driving, as well as confluence of advanced safety and comfort and convenience items, will require a powerful centralized vehicle computer. Today’s cars operate using a web of many separate controllers and Bosch has placed a big bet on a centralized brain for the car.

“We have been working on it for a number of years,” Stepper says, noting research accelerated earlier this year with the announcement of a partnership with U.S. technology giant Nvidia to bring supercomputing and artificial intelligence to vehicles.

Nvidia will provide the AI chip, while Bosch will build the central-control unit and bring its vast knowledge of automotive systems engineering and integration to the cooperation.

In another recently launched partnership focusing on future mobility, Bosch and longtime customer Daimler plan to bring shared, automated vehicles to market. The collaboration focuses on the co-development of software and algorithms to bring Level 4 and Level 5 automated vehicles to urban areas by the beginning of the next decade. Daimler provides manufacturing expertise to the partnership, while Bosch again brings systems and hardware knowledge.

Bosch and Daimler see urban automated driving reducing traffic congestion, improving safety and boosting the attractiveness of car sharing by, for example, providing people without a driver’s license with another transportation option.

“This topic is so immense (and) these systems are so sophisticated that it is very challenging for one individual company to bring this to market in the time the market demands,” Stepper says.

On the safety side of the business, Stepper says a major Bosch initiative is integrated safety systems. Integrated safety systems leverage the sensors of active safety to improve the performance of passive-safety features such as airbags which, using data regarding the direction and force of collision, could vary deployment to maximize effectiveness.

The promise of the Internet of Things links all of Bosch’s business units together. At the 2017 Consumer Electronics Show, the supplier revealed a concept car demonstrating how connectivity makes the automobile a third living space by connecting with other forms of transportation, the smart home and smart cities via the cloud.

On the industrial side of the business, Bosch technology uses IoT to integrate people with the machines they operate to improve productivity, manufacturing safety and quality. The supplier expects the technology will save $1 billion across its 270 manufacturing sites by 2020.

Bosch expects IoT to become such a central element of future products across its business the supplier recently partnered with the Chicago Connectory, an innovation incubator leveraging some of the brightest minds in IoT. An alliance between Bosch Software and GE Digital also fuels innovation around IoT.

“A lot of companies talk about IoT, but for us it is not a buzzword,” Mansuetti says. “We think of it as how we can continue to improve the quality of life.”