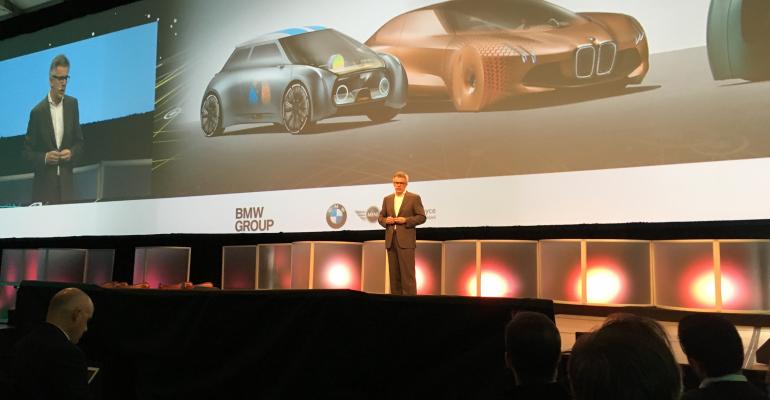 The automaker peels back the curtain on its mobility gameplan and argues it&rsquo;s in a better position than most to lead the way into the future.

LOS ANGELES – The seemingly unstoppable trend toward autonomous vehicles might be problematic for Germany’s BMW, which has built its reputation around the concept of “the ultimate driving machine.”

But at the AutoMobility LA conference held here at the Los Angeles auto show, Peter Schwarzenbauer, BMW management board member in charge of customer engagement and digital innovation, peels back the curtain on a game plan for the brand that has it not only participating in the mobility future but driving much of it.

“We take this whole transformation process as a chance, not a threat,” he says. “The digitalization we’re seeing right now, the different kinds of engine concepts coming to the market over the next (few) years will make this era see a bigger revolution than we ever have seen in the automotive industry.

The strategy calls for autonomous BMWs, now under development with technology partners Intel and Mobileye, to be on the road in 2021. “You can count on it. We will deliver (autonomous vehicles) in 2021,” the executive says.

Schwarzenbauer points to what he sees as strengths that will allow BMW to be a key player in the industry’s mobility transformation, including its traditional stake as a mass producer of cars and SUVs.

“This is a major strength,” he says, pointing to the automaker’s 31 assembly plants in 14 countries and its ambitious plans to release 40 new models over the next two years, the most aggressive product rollout in its history. “A lot of companies that are now starting in this sector are realizing car production is not as easy as scaling a smartphone.”

Safety will be a key factor when it comes to building consumer trust in autonomous-vehicle technology, he points out, suggesting BMW also has an advantage here against up and coming disruptors.

“Who would you trust more with your life, somebody who just built the first car in its history or somebody who has a proven record of building very complex, very safe cars?”

Although he doesn’t elaborate, Schwarzenbauer says BMW’s autonomous vehicles will continue to feature “emotional driving” characteristics. “If some people think that when we get to autonomous drive this type of emotional (appeal) doesn’t come any more, they underestimate the (importance) of the thrill of driving. So we feel strongly this also will be important in the future.”

Connectivity is another critical piece for future automakers, Schwarzenbauer says, pointing to a recent customer poll by BMW in which 73% said they would be willing to switch car brands immediately if they could get a better digital experience.

“This is amazing,” he says, “because, in the automotive industry, to get people to change their brand is quite challenging.”

All BMWs built come with Internet connectivity, Schwarzenbauer says, and the automaker has an open source for its infotainment system that enables third-party apps and services to be used in the car, including Amazon’s Alexa and Google’s Home assistants, “Other automakers are just thinking about the importance of connectivity, but we have 10 million vehicles on the road. We can scale (features) quite quickly.”

​Schwarzenbauer alludes to a future in which customers will pay for access to various BMW vehicles by the minute or look to the automaker for complete mobility planning – from accessing a car to booking a flight or acquiring a rail pass. He also shows a slide that envisions four core vehicle concepts of the future: a more utilitarian entry-level small car, a performance model, an ultra-luxury sedan and a motorcycle.

The BMW executive paints a picture of advanced mobility and the modern city in which no traffic lights or signs or parking spaces will be needed and vehicles will be powered by near-silent and emissions-free electric motors. “The quality of life in cities will be so much better that we almost can’t imagine it. This is not utopia; it will happen.”

The ultimate-driving-machine brand has no thought of sitting on the sidelines in the shift to autonomous, Schwarzenbauer emphasizes.

“We have the knowhow and financial power to invest in all this new technology,” he says. “We might not be the world champion in announcing things, but we will be the ones who are delivering it.”