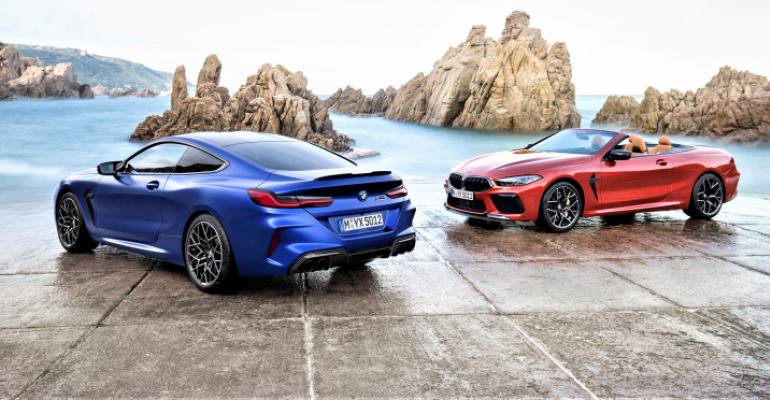 The latest in a growing lineup of performance models from BMW’s M division builds on the strengths of the recently introduced M850i with a V-8 gasoline engine shared with the latest M5.

BMW’s new all-wheel-drive M8 will offer up to 616 hp and a top speed of 190 mph (306 km/h) in top-of-the-line Competition guise when it goes on sale later this year, making it the most powerful and fastest 2-door production model yet sold by the German automaker in North America.

Revealed in Munich for the first time in production form ahead of its public debut at the Frankfurt auto show in September, the latest in a growing lineup of performance models from BMW’s M division builds on the strengths of the recently introduced M850i with a V8 gasoline engine shared with the latest M5. It also features a chassis honed during a development program carried out partly at the demanding Nurburgring circuit and a leather-lined cabin equipped with BMW’s latest digital and connectivity functions.

As with the M850i, the M8 offers the choice of both coupe and convertible body styles, the latter featuring a multilayer fabric roof structure that stows in a dedicated compartment at the rear of its 2-plus-2 cabin. It enters the BMW M lineup as a replacement for the rear-wheel-drive M6 and M6 Convertible and a high-end rival to the Mercedes-AMG S63 4Matic Coupe and Convertible.

Power for the M8 comes from the same longitudinally mounted twin-turbocharged 4.4L gasoline V-8 as that used by the M5. Among its technical highlights is a high-pressure fuel-injection system that operates at up to 5,075 psi (350 bar), indirect-charge air cooling and cross-bank exhaust manifolds.

With various tweaks to its induction system and more rigid engine mounting, the reserves of the BMW M-developed engine are increased, providing the M8 Coupe Competition and M8 Convertible Competition with 616 hp at the 6,000 rpm and the same 553 lb.-ft. of torque as the standard M8 but over a 200-rpm-wider band of revs between 1,800 and 5,800 rpm. 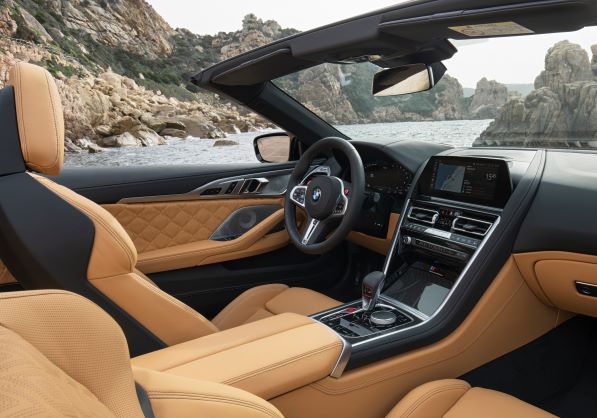 The M8’s all-wheel-drive system draws on developments brought to the latest M5, offering the choice between standard 4WD, 4WD Sport and, with the DSC dynamic stability control system switched off, a pure rear-wheel-drive 2WD setting.

Underpinning the new BMW M flagship is a so-called adaptive M suspension with double wishbones up front and a 5-link arrangement at the rear together with variable damper control and standard 20-in. alloy wheels shod with 275/35 ZR20 front and 285/35 ZR20 tires. The steering uses a further-developed version of the M850i’s EPS (electric power steering) system with an M-specific Servotronic function with variable ratio.