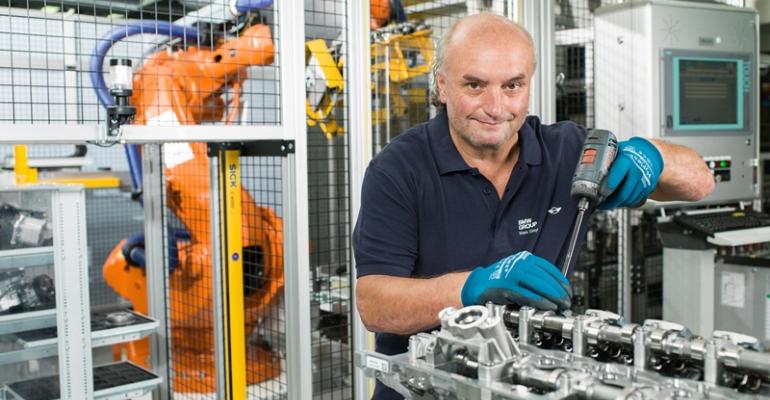 Even as Volkswagen&rsquo;s emissions scandal hurts demand for diesel engines, BMW&rsquo;s retooled plant in Steyr, Austria, is flexible enough to respond by quickly ramping up production of modular gasoline engines with little disruption.

STEYR, Austria – BMW has an artistic way of reminding employees working at its engine plant in this charming 10th Century town that precision is a way of life, that gasoline and diesel engines produced here are fastidiously benchmarked by competitors.

Driving home the point is a simple brick walkway connecting one building to another at this massive manufacturing and engineering campus. What seems like a creatively arrayed series of yellow metallic hoops, each standing about 9 ft. (2.7 m) tall and forming a canopy overhead as pedestrians pass through, is so much more.

The large hoops represent the diameter of a human hair, and the blue painted handrails inside the hoops, about 2 ins. (51 mm) thick, are equal to 1 micrometer, or 1 thousandth of a millimeter – the dimension by which so many BMW engine components are measured. It’s an exceedingly tight tolerance that means everything to the Bavarian brand and its cherished engines.

BMW has earned 33 Wards 10 Best Engines trophies since the competition began in 1995 – more than any other automaker – and many of those winning engines were manufactured here. It’s BMW’s largest engine plant, supplying more than half the powerplants installed in all BMW Group vehicles.

Three years ago, BMW began migrating toward a modular engine family requiring standard displacement of 0.5L per cylinder for all gasoline and diesel engines, regardless of the number of pistons. Accommodating power requirements as new vehicles are developed is a simple matter of adding or subtracting cylinders.

The transformation was swift and comprehensive: Today, the only “N” engine still in production (in Shenyang, China) is the gasoline N20 4-cyl. for certain vehicles in China nearing the end of production, Fritz Steinparzer, director of diesel engine research and development for BMW Group, tells WardsAuto after a tour of the plant here.

The new modular approach allows more than 60% of all the gasoline engines to share identical components, and the same is true for the diesels. The sharing also crosses over between the gasoline and diesel engines, as up to 40% of components are common between them.

“We have a lot of shared components,” Steinparzer says. “They use the same starter, some of the same pipes, the same alternator. The 3-cyl. petrol and 3-cyl. diesel engines have the same oil pan.”

Most components are shipped to the Steyr plant from suppliers or from BMW’s foundry in Landshut, Germany, near Munich.

But the automaker identifies four “core components” that must be machined and finished here: cylinder heads, connecting rods, blocks and crankshafts. The Steyr operation exports these components to other BMW engine plants in Munich, Shenyang and Hams Hall, U.K.

“We can produce crankshafts for 4-cyl. diesel and gasoline engines on the same production line. It’s easy to switch those out,” Steinparzer says. “Another example is the crankcase for 3-cyl. gasoline and diesel engines,” which are identical when they come from the foundry.

Mini joining the BMW fold in 2000 had much to do with the evolution and eventual adoption of the modular engines.

The modular strategy turned out to be the best way to reconcile these differences in a cost-effective manner that gave each brand what it needs, while ensuring the Steyr plant’s future for years to come as a flexible lynchpin.

The blocks are dimensionally and conceptually the same for all gasoline and diesel engines, and no matter how many cylinders they bear, the attachment points for the transmission are identical for all blocks, whether engines are longitudinal or transverse-mounted.

“A big advantage of this engine family is the interface to the car,” Steinparzer says. Even if the vehicle is a hybrid, with an electric motor integrated within the transmission, the bolts connecting it to the block are in the same position.

This increased flexibility has grown vital as Volkswagen’s emissions scandal has hurt demand for diesel engines from all automakers. BMW management could not have foreseen this while planning the new modular engine family years ago, but the decision clearly has paid off.

For the past several years, the Steyr plant had been boosting diesel production by about 40,000 units annually, but VW’s cheating case has resulted in higher demand for gasoline engines from BMW while its diesel output is merely stable, Steinparzer says.

“For BMW, our vehicle production is increasing very fast, but our engine mix is changing,” he says.

Despite the negative publicity for diesel, Steinparzer is convinced compression-ignition engines will remain an important part of BMW’s long-term powertrain future.

“I’m really very sure the European customers, especially in heavier, bigger cars, they want to have the diesel,” he says. “There is no other possibility in Europe, so if you have a 5-Series with the 3.0L diesel, you can drive about 900 km (559 miles) on a tank of fuel. The customer knows that and wants that.”

The Steyr plant opened in 1979 and began producing 6-cyl. gasoline engines in 1982 and diesel engines the following year. Some 4,500 people work here and assembled more than 1.2 million engines in 2016.

This past March, the 20 millionth engine left one of three assembly lines. Most of the plant runs three shifts daily, and seven-day production is not uncommon. An engine rolls off the line every 14 seconds and arrives at a vehicle manufacturing plant within eight hours.

Since 1979, BMW has invested about €6.4 billion ($7.6 billion) in this complex, including last year’s expansion of the diesel development center to include 30 new engine test benches for emissions compliance.