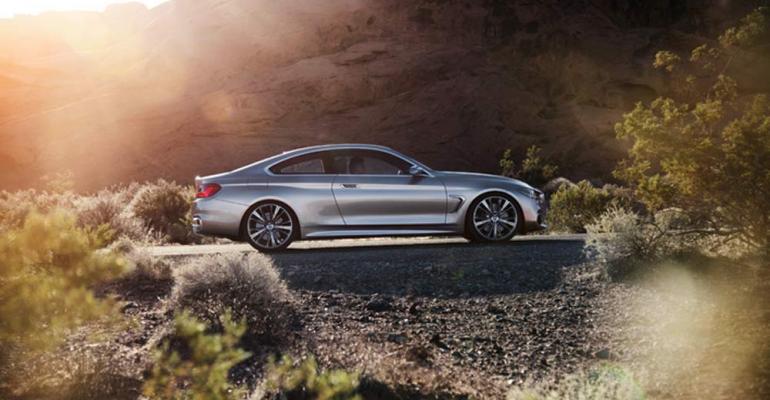 The 4-Series will replace the 3-Series coupe in BMW&rsquo;s stable. A 4-door also is planned, but a convertible is not expected.

TURIN – BMW will signal an all-new model range when it pulls back the covers on the Concept 4-Series Coupe that will bow at the North American International Auto Show in Detroit next month.

Although billed as a concept, the car represents the first look at the upcoming 4-Series line that slots between the 3- and 5-Series and joins BMW’s other even-numbered models, the 6- and 8-Series.

It is the second step in BMW’s quiet revolution after the recent introduction of the front-wheel-drive Concept Active Tourer model at September’s Paris auto show. Both new lines are aimed at expanding the auto maker’s market reach with increasingly diversified products.

The 4-Series will replace the 3-Series coupe. But rather than simply a derivative of the 3-Series sedan, it forms the basis in terms of both image and market perception for an entirely new series. A 4-door coupe is expected to join the 2-door, following the course set by the latest 6-Series that now is offered as a coupe, Grand Coupe and convertible.

Clearly, the new 4-Series is all about emotion, elegance, style, dynamic performance and individuality, not mere transportation. Its size, proportions, design and specifications clearly speak this language.

The exterior design features a long, sweeping hood, with a short front overhang and a passenger compartment set well back of the front axle. The wide track and rear wheel arches, occupied by 20-in. alloy discs, send a strong message of power.

The car’s sleek and elegant design begs for a 3-door sport wagon in the tradition of a shooting brake, and BMW executives confirm they may consider such an option. A convertible is not in current plans.

Inside, there’s plenty of electronic gadgetry mixed in with the car’s wood, aluminum and leather treatments.

“The two-tone Black and Schiaparelli Brown trim provides a particularly effective showcase for the interplay of forms in the front cabin, and light-contrast stitching adds a fresh touch to the leather-covered surfaces,” the auto maker says in a statement.