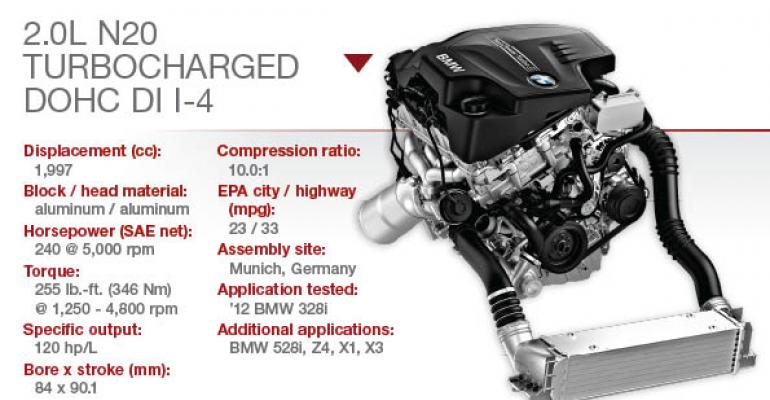 It&rsquo;s apparent why most 3-Series customers are picking the 4-cyl. and why the new car continues to pummel its competitors. The same creamy smoothness that enthralled us last year when this engine was all-new leaves us smitten once again.

With powertrain downsizing taking root in the U.S., the market for stout 2.0L turbocharged engines is becoming a combative place, and not just because they clearly can do the work of a naturally aspirated V-6.

In this year’s competition, WardsAuto editors evaluated four turbocharged engines smaller than 2.0L, and every one of them was in the hunt, raising the specter that even rock-solid 2.0L turbos face a downsizing threat.

But in the end, all three 2.0L turbos that earned trophies last year return for an encore this year, including BMW’s marvelous N20 I-4 mounted under the hood of the 328i sedan as well as four other vehicles in the heart of the auto maker’s portfolio.

It’s apparent why a vast majority of 3-Series customers are picking the 4-cyl. and why the new car continues to pummel its competitors.

The same creamy smoothness that enthralled us last year when this engine was all-new – BMW’s first 4-cyl. in the U.S. market in 12 years – leaves us smitten once again.

Clearly, the combustion-meisters in Munich have a knack for delivering Bavarian performance regardless of the number of cylinders. In the 3-Series, the N20 produces 120 hp/L, but the real game changer is achieving maximum torque of 255 lb.-ft. (346 Nm) by an astoundingly low 1,250 rpm – darn near idle.

It’s uncommon to experience so much thrust so soon after step-off, particularly with turbocharged engines needing time to spool up.

But BMW, in both the N20 and another returning Ward’s 10 Best Engines winner, the N55 3.0L inline-6, has managed to bid Auf Wiedersehen to turbo lag.

How? By integrating the proven Valvetronic variable-intake valve-lift system that determines – and then delivers – the right amount of air for optimal breathing and minimizes pumping losses.

By maximizing Valvetronic’s potential by pairing it with high-pressure direct injection and an efficient single twin-scroll turbocharger.

And by routing exhaust gases from the engine two cylinders at a time in a spiral path to the turbine wheel, minimizing exhaust backpressure at low engine speed and maximizing rotation of the turbine blades for quicker engine response.

Fuel efficiency is first-rate, as well. WardsAuto editors logged 355 miles (571 km) in the 328i and averaged close to 30 mpg (7.8 L/100 km), topping the 328i’s rivals in the competition by several miles per gallon. A key enabler is a svelt 8-speed automatic transmission and a stop/start system some journalists find clunky and disruptive.

Europe has been doing stop/start systems longer and at higher volume than any other automotive market.

Perhaps BMW engines are so inherently smooth that a stop/start system creates the misperception of crudeness. Or maybe the European approach with stop/start is intentionally jarring to remind the driver that the engine is ready to run.

Either way, if stop/start systems make it possible for BMW to continue selling the M3 and other a high-performance vehicles in the face of strict fuel-economy regulations, then we should embrace them.

The stop/start system makes the N20 a better, more fuel-efficient engine. WardsAuto Editorial Director David Zoia describes BMW’s 4-cyl. as the type of engine many 2.0L turbos hope to be some day.