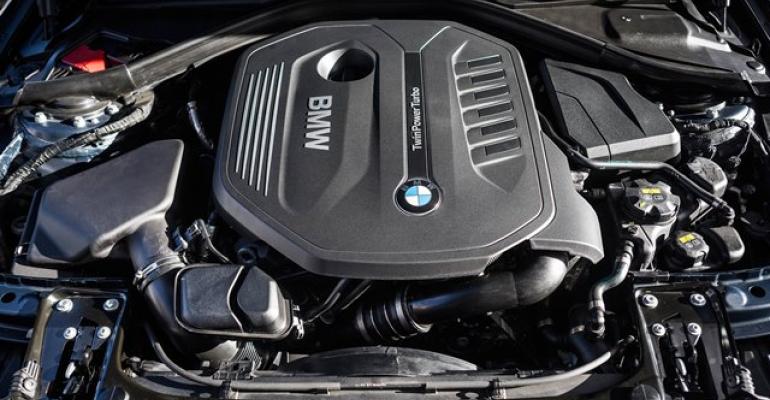 A highlight for the refreshed &rsquo;16 BMW 3-Series is the all-new modular 3.0L powerplant. The new engine features a bevy of technical improvements, including a new water-to-air intercooler and updated twin-scroll turbocharger.

The biggest change in the ’16 BMW 3-Series lies under the hood where the German automaker debuts its all-new 3.0L twin-scroll turbocharged I-6 engine as part of a midcycle overhaul of the company’s bread-and-butter sports sedan.

The world premiere of the B58 engine comes in the 340i, where it replaces the previous-generation N55 engine found in the 335i, a 3-time Ward’s 10 Best Engines winner. Both the old and new powerplants feature BMW’s trademarked TwinPower technology that includes twin-scroll turbocharging, direct fuel injection, dual-Vanos variable camshaft control and Valvetronic variable valve control.

The new B58, however, is part of BMW’s modular engine family that gives the company wide flexibility to use the same 0.5L-per-cylinder aluminum-block architecture across a number of gasoline and diesel engines.

The modular engine is built of lightweight, thermally optimized aluminum, with a closed-deck crankcase design in which cylinder water jackets are closed at the top to improve rigidity. The cylinders feature high-strength, twin-wire, arc-sprayed coatings that reduce friction, save weight and allow easier heat management through thinner cylinder walls.

Preserving engine temperature is the goal behind the modular unit’s engine-mounted encapsulation system – much like an insulating blanket that allows the engine to retain heat for up to 36 hours after shut down. BMW says the retained heat helps the B58 start easier, warm up quicker and reduce emissions.